Background/Context:
1. Can Citizen Rights Be Upgraded To Those Enjoyed By Corporations? This Country, According To The Constitution, Is FOR The People Is It Not?
2. Koch's Are Like Thanos From Avengers Infinity War! (The Right's Version Of Capitalism Could Be Called Thanos Economics!)
3. Billionaires Freak Out About Elizabeth Warren And Bernie Sanders As Protectors Of The People & The Constitution YET They Don't Fear Joe Biden But Welcome Him!

In the following video Robert Reich covers the real divide in America at the moment, the Establishment VS The People (Anti-Establishment). It was conning Americans into believing he was an anti-establishment candidate, who would support the people, that got Trump that critical few percents in key states. Currently there is no right or left, there is only establishment and non-establishment. Establishment keeps things they way they are and that means corporation's lobbyists continue to write laws that benefit them the most (its how bribery works). Warren and Sanders represents a movement of the people towards bringing the American dream to within grasping distance for the non-privileged (a return to the Constitution and "The Great Society", so to speak). 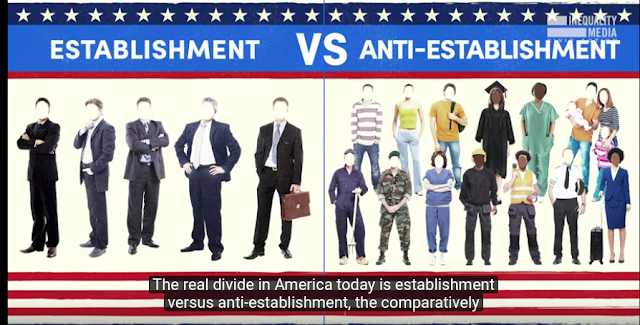 There is no right or left anymore;

Robert Reich: Why 2020 Won't Be Won By Centrists
Former Secretary of Labor Robert Reich explains why we need big ideas in the 2020 Democratic primary.

It used to be that the right and left would argue over the size of the government. Federal expenditure. Presidential power. 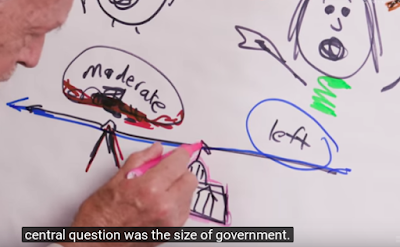 The GOP have gone back on their decades long rant - and apparently con - of being fiscally responsible. They've done the same for family values and upholding the constitution. Not to mention their hypocrisy on Presidential power and Presidential expenditure of taxpayer money. Add to this the GOP - such as Moscow Mitch - fighting to help Russia meddle in our elections () and enabling Trump at every turn (not to mention Iraq etc.)... we have here a party that has taken war on the people to new extremes never before seen since the British were repulsed from our shores. They keep their "base" in check through a Nazi style right wing propaganda channel. This in no way represents the right UNLESS America IS half Nazi.

Instead we are being constantly put through a cultural war (from the same people waging a class war on us); 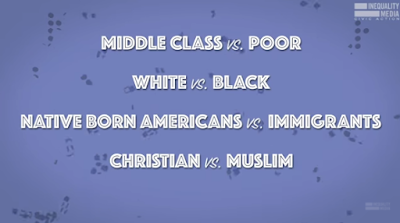 Historical Flashback: Livescience.com - Why Did the Democratic and Republican Parties Switch Platforms?

During the 1860s, Republicans, who dominated northern states, orchestrated an ambitious expansion of federal power, helping to fund the transcontinental railroad, the state university system and the settlement of the West by homesteaders, and instating a national currency and protective tariff. Democrats, who dominated the South, opposed these measures. After the Civil War, Republicans passed laws that granted protections for African Americans and advanced social justice; again, Democrats largely opposed these expansions of power.
Sound like an alternate universe? Fast forward to 1936. Democratic president Franklin Roosevelt won reelection that year on the strength of the New Deal, a set of Depression-remedying reforms including regulation of financial institutions, founding of welfare and pension programs, infrastructure development and more. Roosevelt won in a landslide against Republican Alf Landon, who opposed these exercises of federal power.
So, sometime between the 1860s and 1936, the (Democratic) party of small government became the party of big government, and the (Republican) party of big government became rhetorically committed to curbing federal power. How did this switch happen?
Eric Rauchway, professor of American history at the University of California, Davis, pins the transition to the turn of the 20th century, when a highly influential Democrat named William Jennings Bryan blurred party lines by emphasizing the government's role in ensuring social justice through expansions of federal power — traditionally, a Republican stance.
Republicans didn't immediately adopt the opposite position of favoring limited government. "Instead, for a couple of decades, both parties are promising an augmented federal government devoted in various ways to the cause of social justice," Rauchway wrote in a 2010 blog post for the Chronicles of Higher Education. Only gradually did Republican rhetoric drift to the counterarguments. The party's small-government platform cemented in the 1930s with its heated opposition to the New Deal.
...
From a business perspective, Rauchway pointed out, the loyalties of the parties did not really switch. "Although the rhetoric and to a degree the policies of the parties do switch places," he wrote, "their core supporters don't — which is to say, the Republicans remain, throughout, the party of bigger businesses; it's just that in the earlier era bigger businesses want bigger government and in the later era they don't."
In other words, earlier on, businesses needed things that only a bigger government could provide, such as infrastructure development, a currency and tariffs. Once these things were in place, a small, hands-off government became better for business.

Note 27/2/2020: Media Matters; CNN anchors misleadingly portray popular Democratic proposals such as "Medicare-for-all" and taxing the wealthy as far to the left