We Know That Most People Only Read Headlines So Is Mainstream Media Being Incredibly Stupid Or Are They Intentionally Pushing Untruths?

Washington Post: Mar 19, 2014 -Americans read headlines. And not much else.

Washington Post: Jun 16, 2016 - 6 in 10 of you will share this link without reading it, a new depressing studies says

Related: Study: 70% of Facebook users only read the headline of science stories before commenting

Media pushing a false summary of the news to 60-70 percent of the population!:

Media Matters: Here’s how the NY Times misled readers with its headlines and tweets in 2019

The New York Times, long referred to as the “newspaper of record,” has failed multiple times in 2019 in the way it covered President Donald Trump, the 2020 presidential race, and other issue areas in its headlines and tweets. Media critics, experienced journalists, and other experts called out some of the Times’ headlines and tweets for pushing misinformation, framing the story in line with right-wing talking points, or using euphemisms in place of accurate descriptions.

On March 24, the Times posted a tweet repeating Trump’s lies verbatim that special counsel Robert Mueller’s investigation into Russian interference in the 2016 presidential election “was an illegal takedown that failed” and Mueller’s report was “a complete and total exoneration.” A Times article headline from the same day also misleadingly claimed that Mueller’s investigation found no Trump-Russia conspiracy.
In April, the Times helped spread right-wing falsehoods by credulously repeating a claim by Attorney General Bill Barr during a congressional hearing, which he later walked back, that “spying did occur” on the Trump campaign. On July 25, the Times published a piece on the special counsel’s congressional testimony titled “Lack of Electricity in Mueller Testimony Short-Circuits Impeachment.” The headline was criticized by The American Independent’s Oliver Willis for treating the hearing like it was entertainment.

A February 5 tweet reporting on Trump’s comments on abortion during his State of the Union address quoted a benign-sounding line from him: “Let us work to build a culture that cherishes innocent life.” The tweet failed to address Trump’s smears and lies about Democratic politicians and their support for abortion rights legislation, such as his deranged claim that a Democratic bill in Virginia would allow medical providers to “execute a baby after birth.”
In mid-May, the Times wrote a tweet highlighting Republicans’ “grisly claims that Democrats promote ‘birth day abortions’ and are ‘the party of death.’” Media critic Jamison Foser told the Times that it was spreading Republicans’ lies. The Times later deleted the tweet, saying the tweet did not clarify that “some of the Republicans’ claims” were “false or misleading,” an error Foser said the Times should not have made in the first place.
Read full piece.

CNN essentially threw its anchor under the bus.
During an interview with Trump defense team adviser Rep. Mike Johnson (R-LA), CNN anchor Jake Tapper pushed back on Johnson’s claim that House Democrats conducted the impeachment investigation in “super secret hearings” by using a Sensitive Compartmented Information Facility (SCIF), which he said had prevented himself and other House Republicans from reviewing “all of this evidence, so-called, that had been gathered in the basement.”
Tapper pointed out that the 48 House Republicans from three committees who were allowed in the SCIF “is not nothing” and also pressed Johnson as to whether it bothered him that President Donald Trump’s legal team had made a similar false claim on the Senate floor during their arguments -- questions which Johnson deflected.


The interaction was newsworthy in itself and should have been the focus of the interview.
And yet, shortly after the segment aired, CNN instead chose to highlight a different portion of the segment in a tweet which quoted Johnson asserting that former national security adviser John Bolton’s account of Trump withholding military aid to Ukraine “doesn’t make any difference at the end of the day. ... Abuse of power and obstruction of Congress are not impeachable offenses.”
CNN’s tweet did not provide any clarification of Johnson’s false claim, despite the fact that Tapper attempted to correct him in the same video CNN attached to the tweet.
Read more.


Media Matters: Coverage of Elizabeth Warren’s corporate clients highlights one of the ways headlines are broken

On Sunday evening, Sen. Elizabeth Warren’s (D-MA) presidential campaign released more than 30 years of financial information related to her work as a corporate lawyer and consultant. These new documents come in addition to the 11 years of tax returns released earlier this year.
At first glance, there’s nothing particularly remarkable about the new information. The new documents detail more than 50 cases Warren worked on during her time as a law professor, dating back to 1985. In total, Warren made more than $1.9 million between the first case listed and the final one in 2009, or around $80,000 per year.

A number of mainstream media outlets adopted the most sensational possible framing of this story.

The Washington Post, Politico, and ABC News were among the outlets that ran headlines referencing the total amount of money Warren brought in through these cases without providing any clues to the timespan.

Others, like CNN, The New York Times, The Wall Street Journal, and even Fox News highlighted that the $1.9 million was earned over three decades.

Though both groups of headlines are true, the second set of headlines is a more accurate representation of the truth. Another truthful framing would be to break it down by a yearly average -- which comes out to be just under $56,000 if you’re counting from 1985 and 2019, or roughly $80,000 per year if you’re looking at this from the perspective of the years between her first (1985) and final (2009) listed case.

How journalists represent data can affect what audiences take away from their work.

On Tuesday, President Donald Trump sent House Speaker Nancy Pelosi (D-CA) a rambling, unhinged, six-page screed in his own defense prior to the House’s Wednesday impeachment vote. The letter was riddled with factual errors ranging from misstating the number of votes he received in the electoral college to falsely stating that the whistleblower’s call was a “false report,” a claim that Politifact has declared its 2019 Lie of the Year.
Less a coherent work and more of a lengthy and lightly copyedited Twitter thread, the letter included bizarre lines such as “You dare to invoke the Founding Fathers in pursuit of this election-nullification scheme?” “It is a terrible thing you are doing, but you will have to live with it, not I!” and “More due process was afforded to those accused in the Salem Witch Trials.”
The letter was an exercise in abject paranoia, and it was exactly the type of letter that would have roiled previous administrations and have people questioning the president’s fitness for office. It was delusional, it was self-aggrandizing, and sadly, it was typical.

Mainstream media outlets did more than just treat the letter as typical; they treated it as normal.

Several early headlines treated the letter like any other piece of communication released by the president. NPR and CNN both described the letter as simply a statement of protest. The Hill wrote that the letter was “objecting to the impeachment process.”

Media Matters: If you read only headlines, you might think Jeff Sessions has become a champion of transgender people Stop writing headlines that whitewash bigotry

Media Matters: Flawed media coverage of Mueller’s findings underscores the importance of good headlines Headlines play a fundamental role in our understanding of the world around us, which is why journalists need to get it right the first time

Media Matters: Everyone knows headlines are broken. Here's how news organizations can start fixing them. 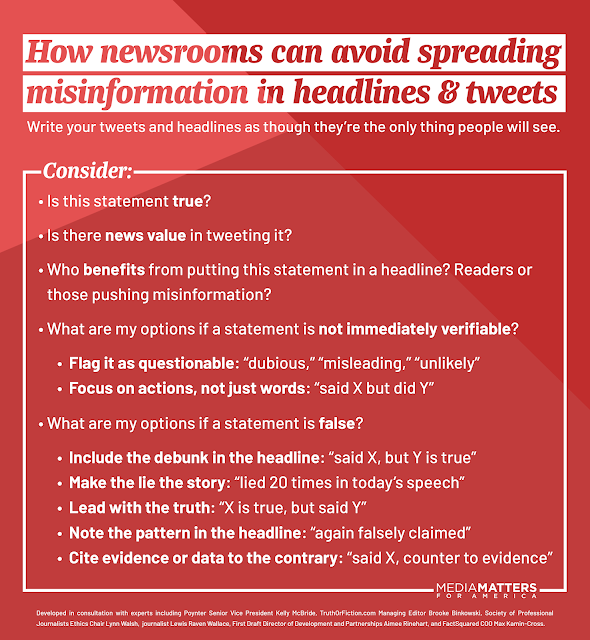