Context:
1. Media: How The "Left" Enables GOP Tyranny - The Southern Strategy By The GOP Created Modern Politics But They Continuously Get Away With It!
2.  Media Uselessness Example: Corporate Media Gives Steve King A Pass On White Supremacism
3. Mainstream Media Is Markedly Pro-Right Wing Lies

This is a great example of how media doesn't cover context for racist stuff that's so embedded in the culture that even the "journalists" don't know about it (or won't talk about it so as to not appear rude... which is what I'm guessing the liberal Germans did with the Nazis).Of course, some will think its a conspiracy as it helps the enemies of the US, but that assumes a level of general knowledge that Americans simply do not have.  The best explanation may be the simplest one. Journalists, and other professionals in media, are uneducated and uninformed and thus are unable to provide context for others when they have none for themselves. Its like getting news from middle school kids.


TRUMP'S POLL VICTORY OVER LINCOLN 12/2/2019 A miniature horse boards a plane as an emotional support animal, Londoners use odd weapons to fight off a terrorist, and GOP voters favor President Trump over Abraham Lincoln.


Highlights: News will tell you this poll that Republicans like Trump better than Lincoln (the Republican partys most famous President); 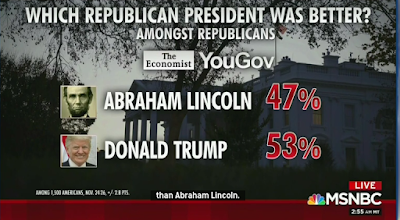 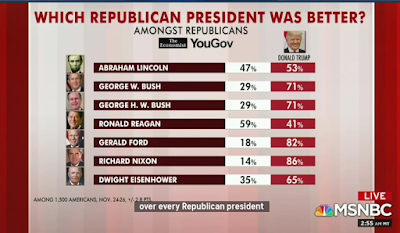 Synopsis: First notice that the Republicans think Trump was a better President than Lincoln. Then notice that Republicans today are Southerners who were actually Democrats during Lincolns time (i.e. Lincoln was a President of Northerners who opposed slavery, while Trump is a President of Southerners who supported slavery - see full explanation in article below). How can a culture that has supported racism and slavery see Lincoln as better than a President that actually stands for their cultural beliefs? This context is left out of media. Thus we are left with the level of news and information from mainstream media that corresponds the portrayal of news in the movie Idiocracy.

Part left out of the news (i.e. entire context ignored);

History.com: How the ‘Party of Lincoln’ Won Over the Once Democratic SouthDemocratic defectors, known as the “Dixiecrats,” started a switch to the Republican party in a movement that was later fueled by a so-called "Southern strategy."

The night that Democratic President Lyndon B. Johnson signed the Civil Rights Act of 1964, his special assistant Bill Moyers was surprised to find the president looking melancholy in his bedroom. Moyers later wrote that when he asked what was wrong, Johnson replied, “I think we just delivered the South to the Republican party for a long time to come.”
It may seem a crude remark to make after such a momentous occasion, but it was also an accurate prediction.
To understand some of the reasons the South went from a largely Democratic region to a primarily Republican area today, just follow the decades of debate over racial issues in the United States.
he Republican party was originally founded in the mid-1800s to oppose immigration and the spread of slavery, says David Goldfield, whose new book on American politics, The Gifted Generation: When Government Was Good, comes out in November.
“The Republican party was strictly a sectional party, meaning that it just did not exist in the South,” he says. “The South couldn’t care less about immigration.” But it did care about preserving slavery.
After the Civil War, the Democratic party’s opposition to Republican Reconstruction legislation solidified its hold on the South.
“The Democratic party came to be more than a political party in the South—it came to be a defender of a way of life,” Goldfield says. “And that way of life was the restoration as much as possible of white supremacy … The Confederate statues you see all around were primarily erected by Democrats.”
Up until the post-World War II period, the party’s hold on the region was so entrenched that Southern politicians usually couldn’t get elected unless they were Democrats. But when President Harry S. Truman, a Democratic Southerner, introduced a pro-civil rights platform at the party’s 1948 convention, a faction walked out.
These defectors, known as the “Dixiecrats,” held a separate convention in Birmingham, Alabama. There, they nominated South Carolina Governor Strom Thurmond, a staunch opposer of civil rights, to run for president on their “States’ Rights” ticket. Although Thurmond lost the election to Truman, he still won over a million popular votes.
It “was the first time since before the Civil War that the South was not solidly Democratic,” Goldfield says. “And that began the erosion of the southern influence in the Democratic party.”
After that, the majority of the South still continued to vote Democratic because it thought of the Republican party as the party of Abraham Lincoln and Reconstruction. The big break didn’t come until President Johnson, another Southern Democrat, signed the Civil Rights Act in 1964 and the Voting Rights Act in 1965.
Though some Democrats had switched to the Republican party prior to this, “the defections became a flood” after Johnson signed these acts, Goldfield says. “And so the political parties began to reconstitute themselves.”
The change wasn’t total or immediate. During the late 1960s and early ‘70s, white Southerners were still transitioning away from the Democratic party (newly enfranchised black Southerners voted and continue to vote Democratic). And even as Republican Richard Nixon employed a “Southern strategy” that appealed to the racism of Southern white voters, former Alabama Governor George Wallace (who’d wanted “segregation now, segregation tomorrow, and segregation forever”) ran as a Democrat in the 1972 presidential primaries.
By the time Ronald Reagan became president in 1980, the Republican party’s hold on white Southerners was firm. Today, the Republican party remains the party of the South. It’s an ironic outcome considering that a century ago, white Southerners would’ve never considered voting for the party of Lincoln.