Anything that fulfills the General Welfare clause of the Constitution is called "Socialism" by the right;

Socialism is a scare word they've hurled at every advance the people have made. Socialism is what they called public power, social security, deposit insurance, and independent labor organizations. Socialism is their name for anything that helps all people.


While the General Welfare clause is not being followed there is also a sort of "welfare for the rich" program going on that boggles the mind. What social purpose does helping the rich 'get on thier feet' accomplish, when they already have money to live a good life?

It is a travesty that the most profitable corporations avoid millions of dollars in taxes while ordinary Americans pay their fair share. We must stop this corporate welfare. pic.twitter.com/JfKGYYwQ99
— Robert Reich (@RBReich) May 26, 2019


An established company already makes money. All people at the top do (most of the time) is follow tradition and procedure to make money.

Except for the rich, the economy is not doing as well as people like to think (minimum wage hasn't even kept pace with inflation for decades or minimum wage would be approximately 21-23 dollars an hour, that would support a person with a family in today's economy... not to mention that increasing minimum wage boosts the economy);

Trump's economy is failing most Americans -- who wonder how to pay bills when costs of health ins, housing, college, and child care are soaring, pay raises are minuscule, and job security is gone. https://t.co/QTol7ilkLa
— Robert Reich (@RBReich) May 19, 2019

Trump: Avoiding taxes is a "sport" that the wealthy and corporations play. It's just smart.

Also Trump: Those on Medicaid and Social Security should work for their benefits. They're draining the system!

This week he laid off 150 employees at their manufacturing plant in Minnesota. https://t.co/ilfHDvzGRw
— Robert Reich (@RBReich) May 11, 2019

We're in a "Hunger Games" economy. But instead of killing one another off, most Americans are lured into fighting over same shrinking share.
— Robert Reich (@RBReich) August 9, 2013

- 255x the annual presidential salary he volunteered not to take

- 3x the cost of Mueller's investigation


Trump: "I won't have time to play golf if I'm elected president."

Ben Carson: Poverty is just a mindset. Let's cut programs for the poor.

The hypocrisy of these people never ceases to amaze me.
— Robert Reich (@RBReich) May 18, 2019

Why exactly did Trump and Betsy DeVos cut funding for the Special Olympics? Not to save money. Cutting just 5 Trump trips to Mara Lago would save as much. So would eliminating special tax break for private jets. https://t.co/lcM6uzNuO2
— Robert Reich (@RBReich) March 27, 2019

Openly lying is what Dictators do (and Trump is being enabled by the Republicans natural ass kissing attitude to wealth)...

We cannot become inured to this authoritarian behavior. Dictators and despots use this kind of rhetoric to suppress opposition. It is up to us to work as hard as we can to reclaim our democracy from this man -- and his enablers.pic.twitter.com/d7PioGhF0s
— Robert Reich (@RBReich) May 21, 2019


Trump, accusing those who investigated him of committing “treason,” has unleashed his lapdog AG William Barr to find evidence they did so.

Attacking the patriotism of truth-tellers, like accusing the press of being “enemies of the people,” is an age-old technique of tyrants.
— Robert Reich (@RBReich) May 24, 2019

Finally, the Republicans have shown they are no better than thier historical right wing counterparts, the Nazis;

The Republican Party in Congress has become a zombie-like Trump cult. Those who try to escape the cult and revert to human behavior -- exhibiting independent judgment, thought, logic, and integrity -- are excommunicated. Sad. https://t.co/Pgfy5JMobL
— Robert Reich (@RBReich) May 20, 2019


Defense contractors are making a killing on the taxpayer's dime.

One company charged the Pentagon a whopping $4,361 for a half-inch metal pin, raking in a profit of ~9,400 percent.


What we have become, is an Oligarchy;

Is America an oligarchy? Even a system that calls itself a democracy can become an oligarchy if power becomes concentrated in the hands of a few very wealthy people and corporations. pic.twitter.com/kZsDfj6It6
— Robert Reich (@RBReich) May 28, 2019

In pushing a large deficit in defiance of the GOPs years long standing position on not having debt, while pushing the same economic con started by Dick Cheney in the 80s, the GOP have proven themselves to be hypocrites on fiscal responsibility (and pretty much everything else) and are currently making the poor pay the rich interest like loan sharks...

How income inequality can create monarchical societal structures which is exactly what the Constitution was written to protect us from;

Robert Reich: Why We Need a Wealth Tax
Robert Reich explains why we must tax wealthy estates in order to reduce inequality.

Fox News and Republican strategists lie all the time (such as with the marginal tax rate), selling their traditional brand of fake economics. Their biggest myths, including the one around marginal tax rate, are outlined in this video;

Most people in America are in favor of increasing the marginal tax rate; 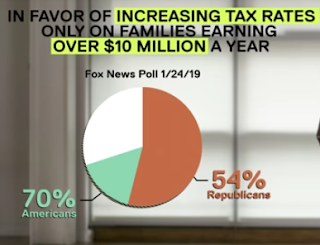 The economy grows with a high marginal tax-rate; 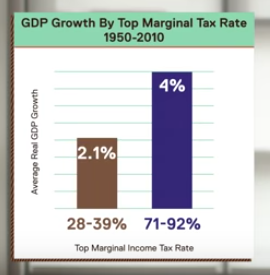 Great ideas to save our country;


Corporations have gone from contributors to society to "weird people" who want to maximize profits at all costs, no matter the social cost. Thus Federal Laws are needed to minimize, or eliminate, negative externalities as States, left to their own devices, begin a race to the bottom;

What we have is a system of socialism for the rich and a sort of Hunger Games for the rest of us;

Robert Reich: Socialism of the Rich, Capitalism for the Rest
Robert Reich explain how the wealthy and corporations receive billions in corporate welfare.