Debunking The Ancient Aliens Hypothesis: Its The False Historical Timeline That Makes The Remains Of A Forgotten Civilization(s), And Its Mythology, Seem Like A Reference To Aliens Or UFOs To UFO Enthusiasts (With Graham Hancock)

Context:
1. About The Denosivan Stone Bracelet That Has A Drilled Hole Providing An Ancient Technological Developmental Link To The Later Megalithic Cultures And Monuments Such As Gobleki Tepe & The Pyramids Of Giza
2. Debunking Egyptologists Dr. Mark Lehner From the University Of Chicago & James F. Romano, Curator At The Brooklyn Museum
3. "Is The House Of History Built On Foundations Of Sand?" - Graham Hancock
4. Debunking The Ancient Alien Hypothesis: Meet The Ancient Humans & Giants Whose Descendants Were The Annunaki/ Watchers/ Niphilim/ Egyptian-Gods ("Civilization Bringers") Of Ancient History

At the following talk at a UFO conference, Graham Hancock presents evidence that signs of advanced civilizations, often falsely attributed to aliens, are actually just civilizations not marked on modern history's timeline.

Info: Graham Hancock argues there were not sudden “inventions” of new and previously unknown skills, but a transfer of technology to hunter-gatherers from the survivors of a more advanced “lost” civilization. These survivors were remembered by later cultures under such names such as ‘the Sages’, ‘the Magicians’, ‘the Shining Ones’, and ‘the Mystery Teachers of Heaven’. They traveled the world in their great ships doing all in their power to keep the spark of civilization burning. They settled at key locations where new archaeological discoveries are now being unearthed – Gobekli Tepe in Turkey, Baalbek in the Lebanon, Giza in Egypt, ancient Sumer, Mexico, Peru and across the Pacific where a huge pyramid has recently been discovered in Indonesia. 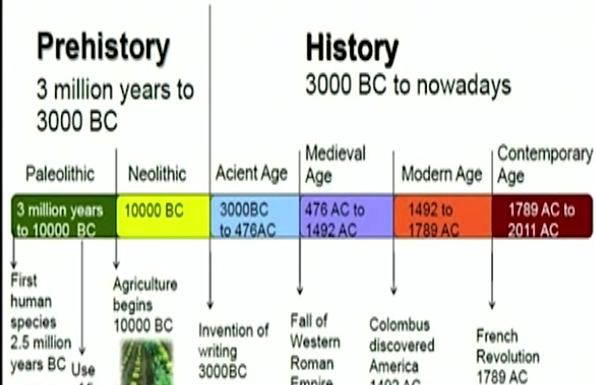 Time line of history has been punctuated with a major global cataclysm of a comet that would have killed off any major civilization in America or on the coastlines, not to mention the havoc the 1000 years of deep freeze followed by another round of floods must have caused. 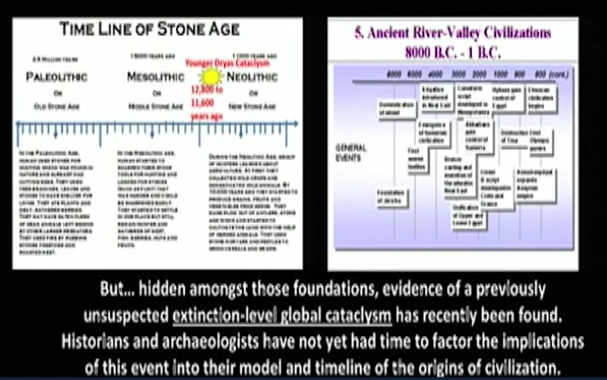 Those of us working on an alternative history of humanity need to hold ourselves to standards of evidence AT LEAST AS HIGH as is demanded of mainstream scholars if we are ever to get history rewritten. With this in mind I want to say a few words about the “ancient astronaut hypothesis” and its claim that revelations and radical new meanings emerge from ancient texts and traditions when they are read in the light of modern space-exploration technology.
I have no problem with the notion that the universe is full of life, or with the notion that we are being visited now, or have been visited in the past, by “astronauts” from other planets. Much remains unknown and while that is the case we should not be too hasty to ignore extraordinary possibilities.
I am quite clear, however, having spent more than quarter of a century walking the walk across many of the most intriguing ancient archaeological sites on earth, and digging into ancient texts and traditions from all around the world, that NO ancient archaeological site and NO ancient text or tradition that I have yet come across provides persuasive evidence for the “ancient astronaut hypothesis”.
...
My own view is that all of the anomalies of history and prehistory pointed to by advocates of the ancient astronaut hypothesis are far better and more elegantly explained as emanating from a lost, advanced HUMAN civilization of prehistoric antiquity than from high-tech alien visitors from another planet. I’ll be making the case for this at Contact in the Desert, Joshua Tree, California, 3-6 June. As well as my lecture on this subject to the full conference I’ll be hosting a workshop on the “consciousness connection” to ET abduction and encounter experiences — which I think are evidence of something MUCH more mysterious going on than JUST contacts with physical beings a bit like us but from another planet and with higher tech. Finally I will also be holding an open-house “Intensive” for discussion with critics and supporters of my work. Let’s discuss everything! Details of my main presentation, and for registration at my workshop and intensive can be found by clicking this link: http://contactinthedesert.com/grahamhancock/. Hope to see you in the desert!!
The illustration accompanying this post shows Mesopotamian seal VA 243, kept in the Vorderasiatische Museum in Berlin. This seal is the centerpiece of Zecharia Sitchin’s theory that the Sumerians had advanced astronomical knowledge of the planetary bodies in our solar system. For a critique of Sitchin’s take on the seal see http://www.michaelsheiser.com/va_243%20page.htm, with more detailed information available on this pdf: http://www.sitchiniswrong.com/VA243/VA243.htm
Read full article here.

This debunks theories of Ancient Aliens on the History Channel that you can find in clips such as these:

Ancient Aliens: Aztec God's Visit (Season 12, Episode 7) | History
Ancient astronaut theorists ponder the origins of the architects of the ancient Mesoamerican city of Teotihuacan in this clip from Season 12, Episode 7, "City of the Gods". #AncientAliens

Some more examples of how easy it is to debunk the Ancient Alien hypothesis;

The main scientific research the Ancient Aliens series on the History Channel seems to be rumor, superstition and hearsay. The following is a great example given our easily traceable history of civilizations using stone in various ways going back a minimum of 60,000 years.


Analysis: Towards the end of the above video you hear an "ancient alien" expert says, "According to Hindu priests, each of these pillars was specifically tuned, harmonically, in order to communicate with the Gods. So you have to wonder, did extra terrestrial beings come down and give instructions on creating these specific frequencies?"

To begin with, just think how absurd it is that some idiots opinion that aliens were communicating through music with ancient Indians even made it on TV. Ancient Aliens seems to be filled with urban myths and legends disguised as science and research.

To say that there are no technological antecedents to this musical stone technology is absurd. We have the stone bracelet going back 60,000 years and musical instruments going back at least that long. Add to that the fact that a rust proof iron pillar stands in Delhi put up long before modern science rediscovered iron, its not unreasonable to assume that many refuges from many civilizations throughout the years have settled in India and been absorbed by it. There is also evidence of civilization in India going back well over 10,000 years! So there is more than enough time for a technological advancement to develop and disappear such as musical stones.

Another thing is how the "ancient alien" researcher automatically assumes "God" must be a real being and it could be aliens. It should be noted that in many cultures music is seen as Godlike or angelic. Even Christianity has hymns to God... why isn't that God an extraterrestrial? (Or maybe to these guys he is?). Ignoring all or religion and human creativity surrounding religion in favor of aliens sounds like a psychological problem rather than a carefully thought out theory or field of research. Fortunately, ancient humans from advanced human cultures were probably called gods in come context so these guys might occasionally be right... in the same way a broke - old fashioned dial - clock is always right twice a day. To these people even Jesus is probably a child of an alien! Hmmm... the Mormons do believe their God is on Mars!

Another aspect worth noting, from a cultural perspective, is the shallow Christian view the guy has. A God is either real or an alien and the timeline of history is exactly as it is in Christian culture - such as no belief in evolution or a long timeline for history - despite all the evidence commonly available (showing a sever lack of ability when in comes to absorbing new information). BTW, notice that the guy in this Ancient Aliens clip;


...has the same sort of doomsday preparations as right wingers and also believes something crazy about himself which he could easily have gotten from right wing shows such as infowars (or David Ick before him). This is clearly a show catered to the tastes of right wingers which, not coincidentally, also pollutes the airwaves and culture with nonsensical drivel that is characteristic of right wing media outlets.

In many ways Ancient Aliens seems like a shallow White Supremacist ('no colored cultures could have attained anything without alien help') Christian based look at history that seeks to replace anything older than the 4000 BC Christian date with Aliens rather than the earlier 'its just a trick by God' explanation for evolution and the fossil record. Here is a great example Ancient Aliens pushing superstitious Christian nonsense of the sort you find in uneducated, unaware and superstitious religious populations;

As an antidote to the false information spread by Ancient Aliens on the History Channel, read the links below;