GOP's War On America 4: GOP Create An Alternate Reality Based On Lies So They Can Overturn Any Election By Using Fox News To Create False Narratives

1. GOP's War On America: Republicans Take Their Rebellion Against Democracy To The Next Level, Giving Themselves The Power To Overturn Elections Like Dictators

2, GOP's War On America 2: Republicans Are Running Against Democracy Not Democrats

3. GOP's War On America 3: Republicans Turn Over Election Ballots To Crazy QAnon Followers, A Group With Links To Domestic Terrorism

Rachel Maddow reports on Republican members of Congress offering bizarre revisionist descriptions of the January 6th insurrection and Rep. Liz Cheney is purged from GOP leadership for pointing out that Donald Trump lost the 2020 election and state level Republicans continue to attack voting rights, all to try to create a world that better fits Trump's fantasy that the election was stolen from him. 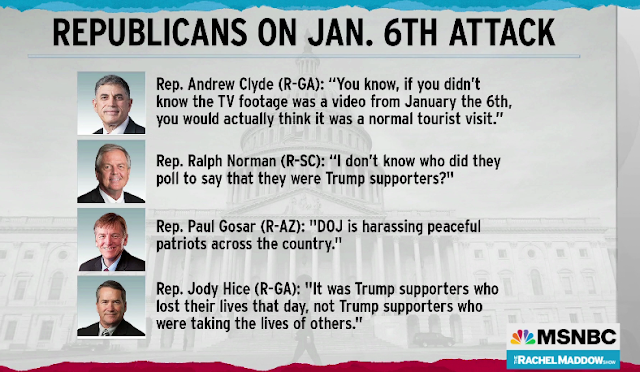 Republicans Try to Rewrite the History of the January 6th Insurrection: A Closer Look

Seth takes a closer look at Republican leaders announcing their opposition to a commission to investigate the January 6th insurrection at the Capitol as the party intensifies its efforts to rewrite history.

Chris Krebs, former director of CISA, talks with Rachel Maddow about how Donald Trump's lies and misinformation as far back as the 2016 campaign with his complaints of a "rigged election" metastasized within the Republican Party to the current mix of falsehoods about the 2020 election and voter suppression tactics.

The Republican Party, Fox News, and the broader right-wing disinformation apparatus that revolves around them have responded to Donald Trump’s 2020 defeat by institutionalizing his lie that the election was stolen and laying the groundwork to rig the next presidential election in favor of the GOP.

Fox is a primary source of information for the party’s voters and a key Republican power base. That would make the network crucial to the future success of an antidemocratic GOP plot, just as it was when Trump tried to overturn the election in 2020. And Fox’s propagandists appear eager to try again in 2024, relentlessly casting doubt on the 2020 results while helping to push out Republicans who refuse to support the party’s authoritarian turn.

They are positioning the country on the brink of the abyss. Next time, political conditions may prove favorable enough to end the American experiment in electoral democracy.

Trump tried a coup in broad daylight — and Fox had his back.

But Trump’s authoritarian drive shifted that coverage in a more dangerous direction.

The then-president spent the months leading up to the election baselessly warning that the vote had been “rigged” by Democrats planning to “steal” it through mail-in voting, and his Fox propagandists echoed his conspiracy theories. This paved the way for the Trump campaign’s despicable back-up plan: if Trump did not win key swing states outright, he would try to have the courts, under false pretenses, throw out enough legally cast ballots to change the results. (The disproportionate weight the U.S. political system gives to rural white voters, a Republican constituency, ensures that the party can carry the presidency without trying to appeal to a majority of voters.)

Election Day came, and Trump lost. But he nonetheless declared victory, falsely alleging massive fraud even as experts and officials said the election was remarkably free of election security problems. His legal team uncorked a ludicrous collection of lies and unhinged fantasies about the election, only to see judges repeatedly demolish their arguments and toss their cases. But it quickly became clear that Trump’s team had a back-up plan to the back-up plan -- and it was providing cover for GOP partisans in states Biden had won. They hoped that even after legal avenues were exhausted, Republican election officials would refuse to certify results in key areas, that GOP state legislators in those states would overturn the results, and that GOP members of Congress would hand Trump the election. And they’d be able to point to the confusion Trump’s legal team had created as their reason.

That seditious conspiracy to shatter the American democratic system relied on the impermeability of the right-wing information bubble. Trump needed his supporters, many of whom get their information almost solely from the elaborate disinformation network of partisan media outlets that Republican leaders propped up in place of mainstream outlets, to believe that the election had been rigged against him.

Fox and its associates did everything they could to support Trump’s autocratic maneuvers. In the two weeks after media outlets called the race for Biden, Fox personalities questioned the results of the election or pushed conspiracy theories about it nearly 800 times. They put the credibility of the network behind deranged lies about fraud plucked from the internet fever swamps, beaming batshit fantasies out to a huge national audience. It worked -- polls following the election showed a majority of Republicans believed that the election was stolen from Trump.

But hosts, contributors, and guests went further than simply lying to their viewers -- they pushed for action. They attacked Republican state officials for being insufficiently committed to Trump’s scheme; called for the arrests of election workers; suggested that Republican state legislators in states Trump lost should “appoint a clean slate of electors” who support him; promoted fake Trump electoral slates for supposedly keeping Trump’s “legal options open”; suggested a “do-over” election as “the only remedy”; called for congressional investigations; endorsed a lawsuit by Republican state attorneys general asking the Supreme Court to throw out results in four states Biden won; urged Republican governors not to certify unfavorable results; and denounced Republican members of Congress for “destroying the Constitution” by voting to count the electoral votes.

Fueled by these conspiracy theories, thousands of Trump supporters breached the U.S. Capitol on January 6 in an effort to prevent Congress from counting the electoral votes. They were lied to, they believed the lies, and they violently stormed a seat of governance in hopes of overturning the election.

Trump’s plot failed. Biden won the Electoral College by too many states, and by too large a margin in those states; Democrats held the House of Representatives and some key state offices; and enough Republican officials refused to participate in Trump’s election theft to thwart it. But the Republican base has been primed to question the results of any future elections the party loses -- and if there’s another push for an antidemocratic solution in 2024, there’s no telling whether those conditions will still hold.

Republican leaders and Fox personalities seem like they want to try again.

The dominant faction of GOP politicians -- including Trump himself -- continue to brazenly lie about the election results and the insurrection provoked by those lies. Those who criticize the party’s authoritarian turn are being censured and purged from positions of power, while those who cast doubt on the election’s validity are promoted. In states across the country, its partisans are changing voting laws in hopes of suppressing enough Democratic voters to win in the Electoral College. If that fails, the party is preparing an alternative path to the presidency: It is building the political will to prevent the certification and counting of valid electoral votes and removing GOP officials who refused to take those steps in 2020. If a scheme like that were to succeed, legitimate election processes in the United States would become meaningless.

Fox’s propagandists are getting ready. They are cheering on the GOP’s purges of officials insufficiently committed to authoritarian rule in the U.S. They are validating and valorizing the Capitol insurrectionists as patriots simply “there to support the president of the United States and defend our republic" rather than a collection of extremists. They are falsely claiming that Democratic pro-democracy legislation before Congress would “destroy the credibility of all future elections,” while defending Republican efforts to restrict voting rights in the states.

At the same time, they are promoting dire warnings about the radicalism of the Biden administration and its allies that would seem to legitimize virtually any action taken by Republicans to regain power. Under the apocalyptic portrait of the future painted by host Tucker Carlson, the face of the network, for example, the “abrupt change” the Democrats are supposedly pushing may force the right to support fascism.

And they are continuing to raise doubts about the validity of the 2020 election. On Fox over the last week alone, network contributor and former House Speaker Newt Gingrich claimed that there’s “no question” states were “stolen” from the former president; contributor and Trump daughter-in-law Lara Trump promoted the “views of most Republicans” that there remain “a lot of questions about this election”; and Carlson asserted that “so many people are lying at such high volume about the 2020 election, it's hard to know exactly what happened,” while introducing a Fox contributor to discuss her forthcoming book about the election, which is titled Rigged.

Here’s where this is going.

Republican voters are terrified at the prospect of continued Democratic control of the presidency. They are predisposed not to accept the results of the 2024 election as legitimate if their party’s nominee loses. And they are primed to demand Republican politicians ensure a victory by any means necessary.

It’s easy to imagine Fox teaming up with GOP leaders to try the 2020 playbook all over again if the party’s nominee loses at the ballot box. The nominee simply needs to refuse to admit defeat, baselessly allege widespread voter fraud, and count on Fox to surface and distribute enough internet conspiracy theories to give party officials cover to overturn the results.

Fox and the Republican Party demolished all the guardrails in 2020, showing that they were willing to overturn the results of a legitimate election when it didn’t go their way. The only question remaining is whether they can do a better job executing their plan.

Media Matters: Fox News anchor Bret Baier covered up network’s role — and his own — in spreading Trump’s lies about the 2020 election - Baier told GOP Rep. Liz Cheney that the network has said election wasn’t stolen — then brought on a guest who just wrote a book calling it “Rigged”