The Russian Takeover Of The Republican Party: Trump and The GOP Have Become Willing And Able Russian Assets

2. The United States Of Russia: Why Is Trump Always Sucking Putin's Dick? And Why Are The GOP Joining Him? If You Can't Beat 'Em Join 'Em?

3. GOP Treason Tactics: Documenting Some Of The Obstruction Of Justice Attempts By The Republicans Using Memos (Such As the Nunes Memo)

Trump's ties to Russia are documented; 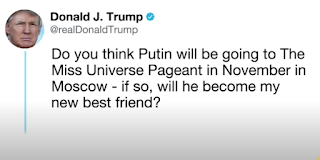 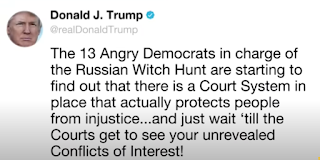 Trumps efforts to follow Russia's lead and cover for them is being adopted by Russia first American party, the GOP;

Russian anti-Biden election interference finds ready conduit in Republican senators
Rachel Maddow notes an particularly specific warning from the director of the ODNI's National Counterintelligence and Security Center that "pro-Russia Ukrainian parliamentarian Andriy Derkach is spreading claims about corruption" as part of Russia's efforts to manipulate the 2020 U.S. election against Joe Biden and in support of Donald Trump. Derkach has not only been using Rudy Giuliani to spread his claims, but Republican senators Ron Johnson and Chuck Grassley have also been receptive to the Russian tactic.

Nunes actually went so far as to make friends with a Russia agent...

Rachel Maddow points out that the new intelligence community report on foreign interference in the 2020 election names Andriy Derkach as an agent of Russia, and wonders why Republicans aren't more troubled over keeping Devin Nunes as the ranking member on the Intelligence Committee given his unexplained interactions with Derkach.

... and Nunes even went on Hannity to spread Russian talking points (Russia is covered from 6:50 onwards)

The Answer Is Simple Yet Strangely Difficult: Don't Hate Each Other

Amid a terrifying rise in anti-Asian violence in this country, and following the grim news that six Asian women were murdered in Atlanta last night, Stephen Colbert pleads with Americans to recognize our common humanity and remember that this nation of immigrants is meant to be a welcoming place for everyone.

Trump and the GOP got their talking points from Russia and covered it up! 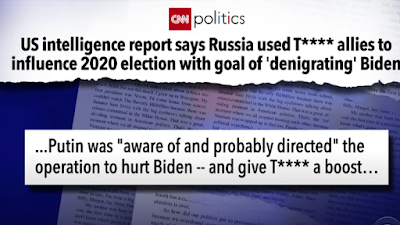 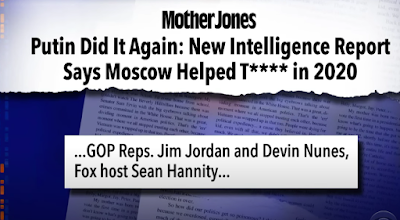 Trump has gone out of his way to protect Russia no matter what Russia does. Trump and the GOP even lied about intelligence in their effort to cover for Russia's attacks on American democracy (which now the GOP are implementing as well).

Intel report shows exact opposite of Trump officials' claims on China election intrusion - Rachel Maddow shows how Trump officials repeatedly accused China of running a massive campaign to interfere in the 2020 election even though intelligence gathered during the Trump's time in office (some of which is now declassified) concluded the exact opposite.

This has been a successful operation for Russia by its carefully cultivated assets;

Donald Trump was cultivated as a Russian asset over 40 years and proved so willing to parrot anti-western propaganda that there were celebrations in Moscow, a former KGB spy has told the Guardian.

Yuri Shvets, posted to Washington by the Soviet Union in the 1980s, compares the former US president to “the Cambridge five”, the British spy ring that passed secrets to Moscow during the second world war and early cold war.

Now 67, Shvets is a key source for American Kompromat, a new book by journalist Craig Unger, whose previous works include House of Trump, House of Putin. The book also explores the former president’s relationship with the disgraced financier Jeffrey Epstein.

“This is an example where people were recruited when they were just students and then they rose to important positions; something like that was happening with Trump,” Shvets said by phone on Monday from his home in Virginia.

The ex-major recalled: “For the KGB, it was a charm offensive. They had collected a lot of information on his personality so they knew who he was personally. The feeling was that he was extremely vulnerable intellectually, and psychologically, and he was prone to flattery.

“It was unprecedented. I am pretty well familiar with KGB active measures starting in the early 70s and 80s, and then afterwards with Russia active measures, and I haven’t heard anything like that or anything similar – until Trump became the president of this country – because it was just silly. It was hard to believe that somebody would publish it under his name and that it will impress real serious people in the west but it did and, finally, this guy became the president.”

Trump’s election win in 2016 was again welcomed by Moscow. Special counsel Robert Mueller did not establish a conspiracy between members of the Trump campaign and the Russians. But the Moscow Project, an initiative of the Center for American Progress Action Fund, found the Trump campaign and transition team had at least 272 known contacts and at least 38 known meetings with Russia-linked operatives.

Note: Faltering Trump is what the GOP and his followers do as well, Clearly the similarities between Russia's Putin and the GOP's Trump are astounding. Its a tradition in the GOP to kiss its leaders ass and listen to them even if they want to do illegal or unconstitutional things. Thus the GOP and Russia are actually twins in the political world, just in different countries/cultures but GOP is definitely heading towards full Russian style tyranny, they know it and love it (its what they are paid to do by hidden rich donors, which is why GOP keep framing Dems with what the GOP are, as they like to do).

Speakers at CPAC praised former President Trump and pushed his election lies, showing the support Trump still has among the GOP's most faithful.

Republicans take spanking from Trump, ask for more - Rachel Maddow marvels at the abject kowtowing by Republicans to Donald Trump, even as he insults them and hijacks their fundraising for himself, they still thank and praise him and pilgrimage to Mar-a-Lago while Democrats go about the business of governing the country.