Trump's Ongoing Insurrection: A Riot At The Capitol Is Exactly What The "Law And Order" President Wanted

1. Trump's Legacy: A Look At The January 6th Insurrection And Attempted Coup By Trump/GOP/FoxNews

2. The Russian Takeover Of The Republican Party: Trump and The GOP Have Become Willing And Able Russian Assets

Trump encouraged his supporters to fight and watched in joy as they rioted. Here is the final piece of evidence that shows Trumps plan to be violent on January 6th was intentional and is ongoing so more domestic terrorism by Trump supporters, fueled by the GOP and Fox News, is expected by intelligence.

Trump pardoned Roger Stone who appeared to be a big influence on January 6th:
Key Trump ally draws renewed scrutiny from prosecutors
Roger Stone, an ally to former President Donald Trump, has appeared in several court filings related to the riot that took place at the US Capitol Building on January 6.
Even the phrase, "stop the steal" is a Roger Stone phrase going back to 2016. Its becoming pretty clear that Trump coordinated the January 6th insurrection against a democratic election with Roger Stone. i.e. everything Trump did on January 6th, before and after, surrounding the lies about the election, are intentional.

Hayes: “But, you know, it's not crazy to suppose the President didn't want him on the bench, he wanted him in the game -- to do what he's done his entire career”

CHRIS HAYES (HOST): It wasn't just that the president gave the speech in which he told people to go to the Capitol, or that he spent a month or more creating the conditions for a violent mob to attempt to stop the peaceful transfer of power. It's that the people of the core of this conspiracy, as revealed day after day in more and more charging documents, are all like, one note away from the president, or his circle.
I mean, look at this picture to see who the Oath Keepers were with the day before this happened. Look at that, it's Roger Stone.
And Roger Stone, let's be clear here -- Roger Stone is not some ancillary figure in Trump world. Remember, Roger Stone was Donald Trump's first political advisor. He was the guy there at the beginning when Trump launched his campaign in 2015.
According to federal prosecutors and to Stone himself, Stone played an instrumental role backchanneling with Wikileaks in 2016, right? Wikileaks, who of course was publishing the hacked and stolen documents taken by the Russian government.
And Stone played a role in communicating with Wikileaks as part of the first effort to cheat and create an uneven playing field for Trump's victory. It was, you know, successful, at least in the Electoral College.
And then subsequent to that, let's remember that Roger Stone lied about it to Congress in order to apparently cover up whatever he was up to in 2016. And he was convicted for those -- indicted and convicted -- for those lies by a jury of his peers.
And then, what happened? Well, he went away to prison but the president intervened, first by pushing the Department of Justice to reduce the sentence and then by first commuting Stone's sentence and then by directly pardoning him. There was no justification for it.
I mean, Trump was just helping out a buddy, right? And it didn't make much sense to commute that sentence in July -- it was the summer. He had to take a big political hit. But Roger Stone's whole life is quite proudly nothing but dirty tricks -- he is the guy with the Nixon tattoo on his back.
He is also the guy who claims credit for helping to instigate the infamous Brook Brothers riot back in 2000. That of course, would be the last time that an intimidating mob of right-wing activists invaded a government building in order to stop the orderly administration of the democratic process.
It's not crazy to think that is why Roger Stone was sprung by the President, why he was freed before the election. I mean, we don't know. Stone hasn't said, Donald Trump hasn't said. But, you know, it's not crazy to suppose the President didn't want him on the bench, he wanted him in the game -- to do what he's done his entire career.
Remember how the slogan around January 6 was, "Stop the Steal?" That's a Roger Stone phrase. Roger Stone coined that back in 2016.
And so, is it surprising to see Roger Stone -- again, long-time associate of the President, the President's henchman, the guy who lied on behalf of the President, who was then pardoned by the President -- to see him around D.C. around the insurrection, getting security from the people prosecutors say were part of the criminal conspiracy to stop Congress from doing its democratic duty?
Now Trump is trying to rewrite history, in the age of video, with the help of Fox News. Seeking to provide cover;
'Zero Threat': Trump, GOP, Right-Wing Media Downplay Horror Of Capitol Riot | All In | MSNBC
“I was there on January 6th – the insurrectionists didn’t give a damn if I was a Democrat or a Republican or a staffer or a visitor. They were out for an attack,” says Rep. Dean on the reality of what happened at the Capitol riot, as opposed to the lies coming from the right. 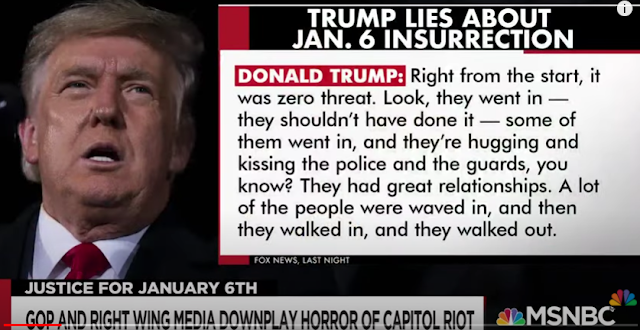 Of course, these lies will lead to more violence and Trump, the GOP and Fox News knows this;

Intel report warns of further violence sparked by Trump election fraud lies - Rachel Maddow shares details from a new report from the U.S. intelligence community that warns that, among other things, "narratives of fraud in the recent general election" and "the emboldening impact of the violent breach of the U.S. Capitol" ... "will almost certainly spur some [domestic violent extremists] to try to engage in violence this year."