GOP's War On America: Republicans Take Their Rebellion Against Democracy To The Next Level, Giving Themselves The Power To Overturn Elections Like Dictators

1. Trump's Ongoing Insurrection: A Riot At The Capitol Is Exactly What The "Law And Order" President Wanted

2. The Russian Takeover Of The Republican Party: Trump and The GOP Have Become Willing And Able Russian Assets

4. The GOP Are Lying Repeatedly And Passing New Voting Laws Based On Their Lies

5. Fox News & The GOP Lie About Voter Fraud So They Can Enact Laws To Destroy Democracy In America (With Robert Reich)

Georgia GOP gives itself the power Trump wanted: to overturn elections they don't like

Rachel Maddow looks at how Donald Trump tried to overturn the will of Georgia voters by putting pressure on election officials, and how a new law rushed through by state Republicans gives them new power over election officials to do what Trump was unable to do in 2020.
Notes: Trump demanded that independently run elections be overturned to give him the votes he wanted to remain president. Of course, making up votes to overturn a democratic election is treason (or Russian style democracy) and that why his followers riot is called an insurrection or an act of sedition. 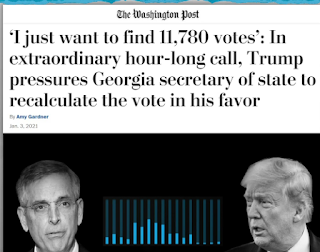 Trumps allies even got behind him to try and create false election result like they are Putin's disciples. 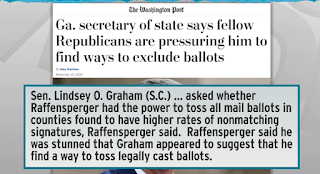 White House chief of staff showed up in Georgia to try and intimidate the vote counters. 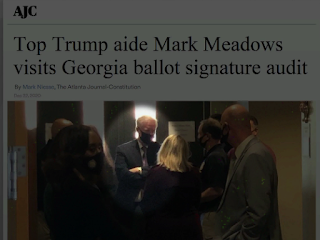 What Georgia did was make it "legal" for them to overturn independently run elections the way Trump wanted. i.e. treason is now legal in Georgia. A State that fought America in the confederacy. 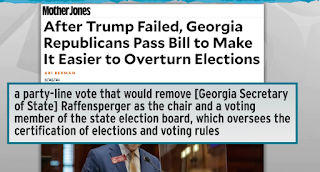 What Georgia has done is removing anyone who would dare honor their oaths to defend the Constitution of the United States and obey rule of law rather than rule of some petty tyrant the Republicans elected. 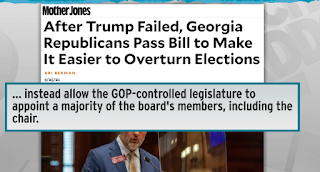 Its clear Republicans intend to steal elections. i.e. insurrection is now their whole mode of operation 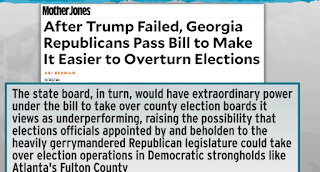 Trump, Giuliani lies are basis of new Georgia voting law, Republican lt. governor admits  - Rachel Maddow shares a clip of Georgia Lieutenant Governor Geoff Duncan, a Republican, stating that the impetus for the new Georgia voting restrictions is the set of lies spread by Donald Trump and particularly Rudy Giuliani that the election was flawed. 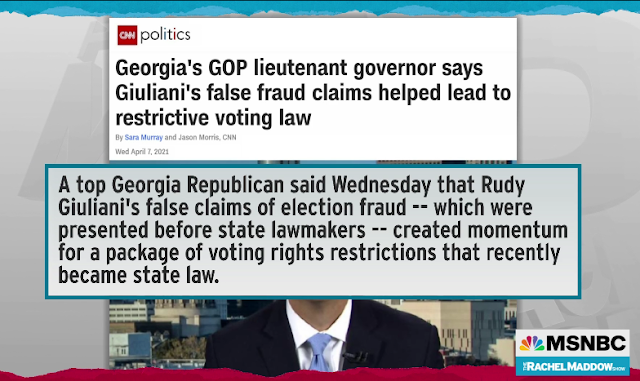 When told about the bill Georgia citizens oppose it overwhelmingly but the Republicans don't care because they have given themselves the power to overturn elections if they don't like it, exactly like a dictator would do.
Republicans indifferent to unpopularity of new voter suppression agenda
Rachel Maddow looks at the unpopularity of elements of the new Republican voting laws with Georgia voters, but points out that Republicans needn't concern themselves with what is popular with voters when they're giving themselves the power to overturn election results.
Polls in Georgia show how much its citizens don't like these new anti democracy laws; 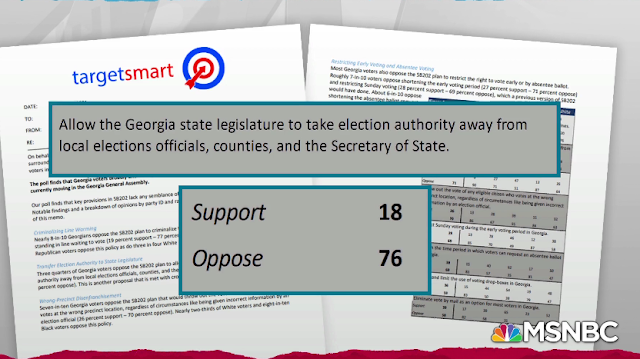 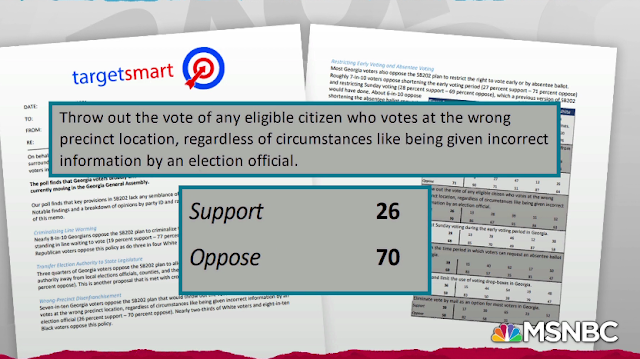 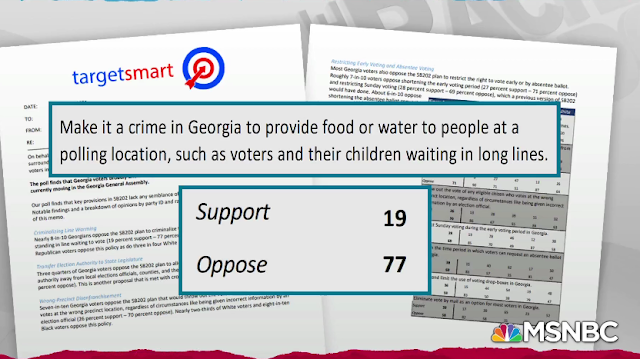 Republicans defy State law and their State constitution to avoid fulfilling their democratic obligation to listen to the people's vote. Only tyrants and dictators ignore votes. Not Americans.

Rachel Maddow reports on Missouri voters defying Republicans and approving a referendum to expand Medicaid that would extend health insurance coverage to over 200,000 people. Instead of accepting the loss, state Republicans are attempting to block the law's implementation. 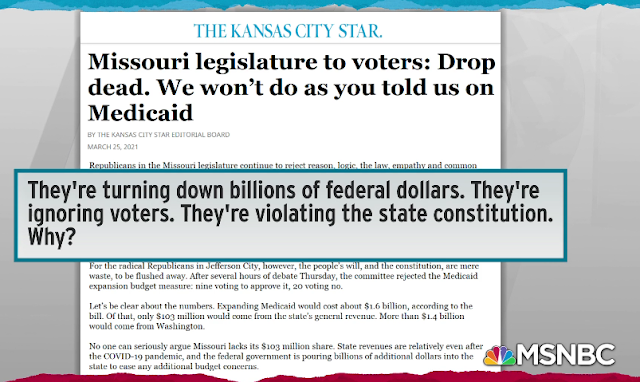 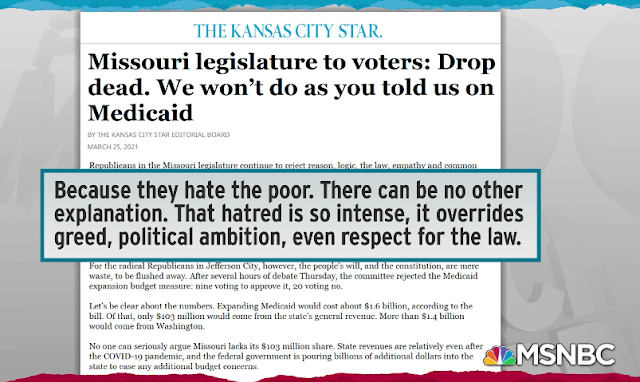 The problem the Republicans solved for themselves is that now Honorable election officials can be thrown out by the Republicans. Since the election in Michigan wasn't even close, to try and subvert an election with these many votes against you (as Trump did) shows no intention of following the Constitution. But Trump and the Republicans DID try and overturn this election showing they are Russians and not Americans.
How one man stood up to Trump and saved democracy for Michigan
Rachel Maddow looks back on how close Donald Trump and his supporting Republicans came to subverting democracy in Michigan in 2020 but for one man, Aaron Van Langevelde, Republican vice chair of the Michigan State Board of Canvassers, who sided with the rule of law instead.
People like him will not be allowed to sit on elections boards. Only bought people will be allowed in Georgia and even Michigan if their anti Democracy/American bills pass; 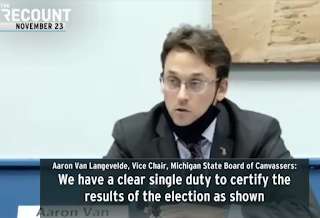 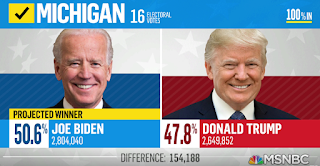 Trump even called a meeting to try and overturn a transparent election; 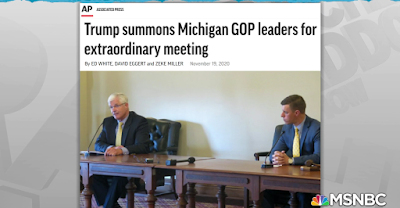 Republicans are setting up to steal the next election while calling any move to support their insurrection a "power grab" (standard Nazi mirror tactic GOP has been using for as long as I've been tracking them).
Georgia Republicans concentrate control over how elections are run
Ari Berman, senior reporter for Mother Jones, talks with Rachel Maddow about how the most nefarious part of the new Republican election law in Georgia is the way it entrenches the state legislature's power over every aspect of how the state's elections are run.
Interestingly enough (or revealing), GOP donors don't like that the American people like democracy! And they are clearly against it!
Broad, Bipartisan Appeal Of Dems' Voting Rights Ideas Alarms Far-Right Billionaires | Rachel Maddow

Rachel Maddow shares highlights of new reporting from the New Yorker's Jane Mayer that far-right dark money groups are panicked over research that shows election reforms proposed by Democrats are popular across the American political spectrum and, as such, are particularly difficult to demonize. 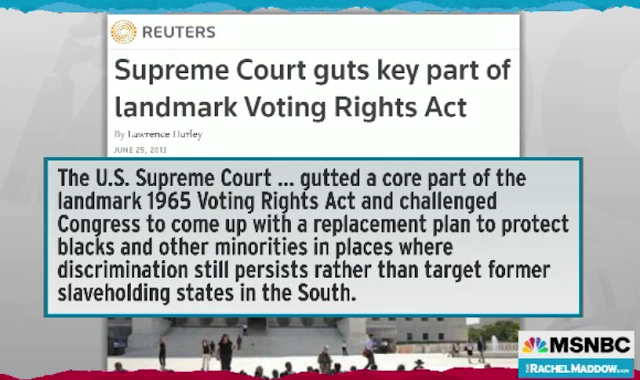 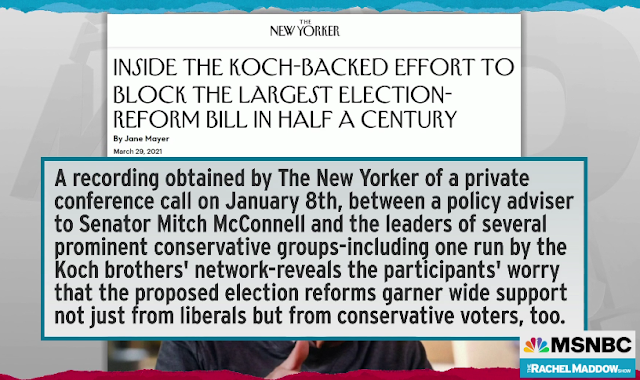 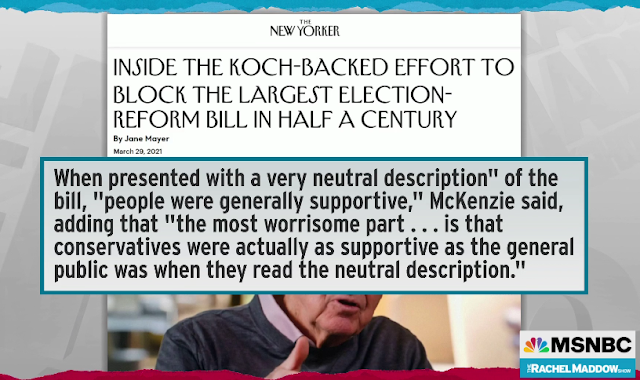 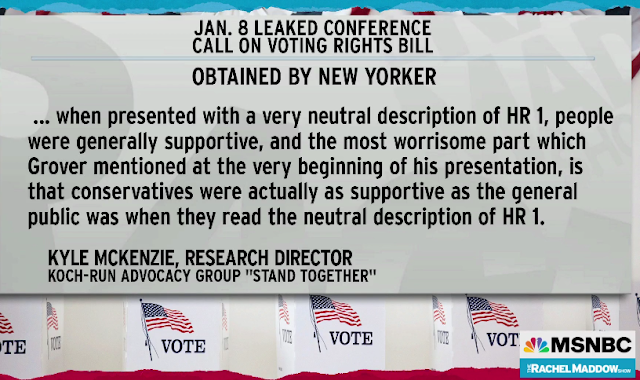 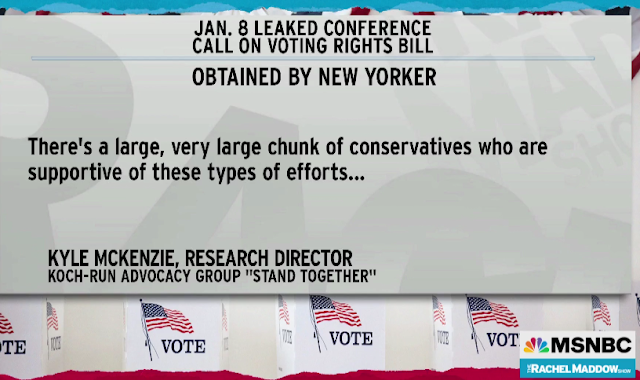 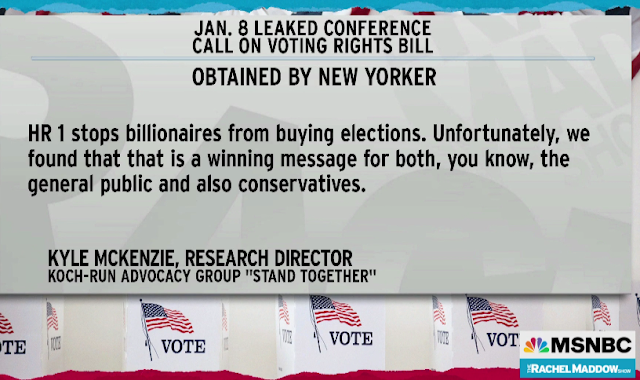 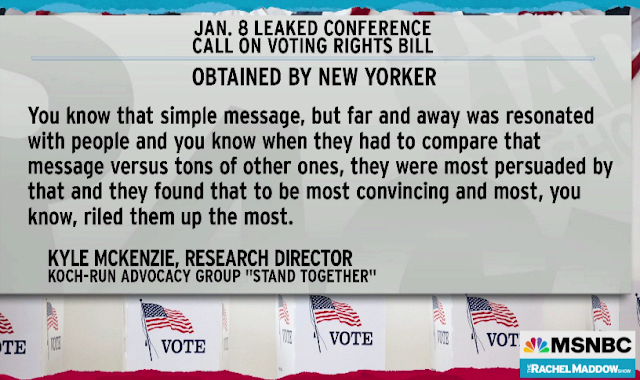 Why Would Corporations Support A Party That Opposes American Democracy?
Corporations normally give to both sides but doing that in this case means you support treason over truth or lies over facts, tyranny over democracy. You would become like corporate media. Malleable on the Constitution and truth. Every corporation who values democracy should actively campaign against Republicans winning elections.
Defending democracy, corporations reprise 2006 role, this time against Republicans
Rachel Maddow reminds viewers of when Republicans, in 2006, worked with corporations to rally support for renewing the Voting Rights Act in a bid to draw the support of Black voters. Fifteen years later, corporations are again standing up for voting rights but this time in opposition to Republicans. 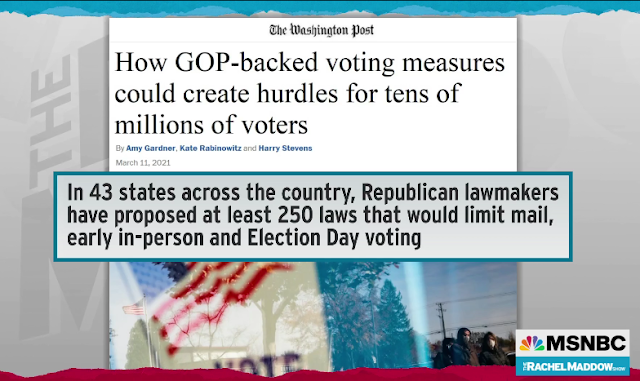 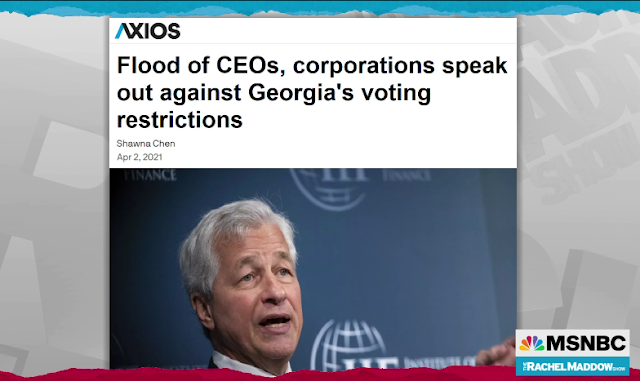 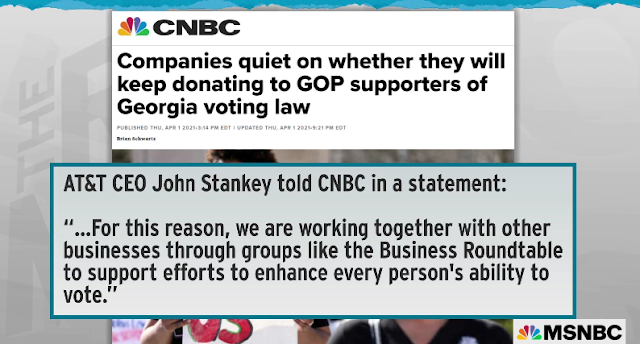 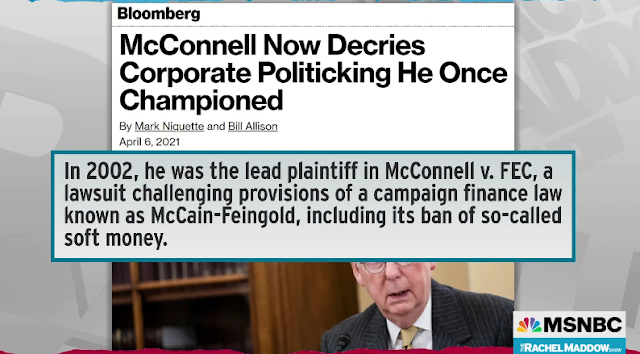 Chris Hayes: 'Republican party is radicalizing against democracy' and saying that Colorado voting laws are the same as Georgia's, which is an outright lie. The measure for good voting access in ANY State. No lines. Colorado is one of the best as far as democracy is concerned.
‘Audacious lie’: Chris Hayes debunks GOP’s false claims on Colorado voting access
Chris Hayes: “The new audacious Trumpian lie from Republicans is that Colorado, where the MLB All-Star game was moved, actually has more restrictive voting laws than Georgia.” 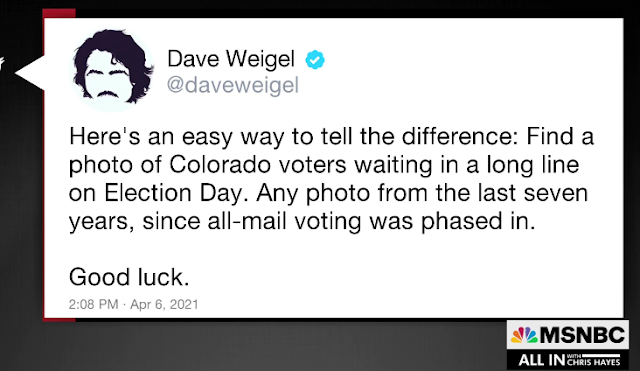 Chris Hayes: “Mitch McConnell's theory is this: money is speech—but speech is not speech. And that's because none of this was ever about speech for McConnell or any of the other Republicans now taking umbrage. It was always about power.”