Crimes Against Humanity: Jesus Says "Love Thy Neighbor" While The Christian Rights Response To Covid (Led By Trump, Fox News & The GOP) Is "Risk Thy Neighbors Life" Or Even "Kill Thy Neighbor"... IN THE NAME OF FREEDOM!

1. The Murdoch/Fox War On The People 2 - Fox News Continues To Spread Misinformation About Coronavirus Inevitably Killing Some Of Their Viewers And Leaving Others Unprepared

2. After Canceling Over 500,000 Lives With Covid-19 Misinformation, Fox News Complains About Dr. Seuss Books The AUTHORS Private Estate Decided Not To Print Anymore

4. Trump The Terrorist: Every Opportunity Trump Has Had He Has Used To Undermine The Health & Safety Of The American People And The GOP Have Supported Him Gleefully
5. ABC News: An American tragedy: US COVID death toll tops 700,000
About 1,500 American lives are still being reported lost to COVID each day.
As Covid deaths reach 750,000 and New Zealand remains at 24, I think its a good idea to outline how we got here. What Fox and the GOP have been selling has been the opposite of what normal people associate with good religion. Normally societies follow the golden rule of doing no harm to others in pursuit of the good life but here Fox News and the GOP have framed good neighborly behavior, as espoused by Jesus himself, into a war by saying having the freedom not to wear masks outweigh any harm or deaths you may cause to others by your negligence. That is the very opposite of good morality and thus the very opposite what Christians say Jesus taught. That the Christian right easily bought into the Nazi style lies of the right wing media is even more fascinating. Here is an outline of how the right has used cries of freedom to wage a health based Anti-Christian war on the people - using mostly Christians - that has killed over 750,000 people.
Fox News Tries To Pass Off Anti-Vax Segments As Being About Freedom
If the only way to defeat this virus is to get everyone vaccinated, then the anti-vax propaganda on Fox News is not helping.

Freedom to breathe without masks while risking the lives of innocent people isn't freedom its terrorism using the words of the patriot. As terrorists tend to do.

36 Master, which is the great commandment in the law?

38 This is the first and great commandment.

39 And the second is like unto it, Thou shalt love thy neighbour as thyself.

40 On these two commandments hang all the law and the prophets.

Simple reality is that if Trump had been interested in protecting the people rather than the volatile markets that stabilize in prosperity anyways, then the US would have a death rate comparable to New Zealand... instead Trump went the way of the terrorist and the GOP and Fox News have fallen in line, using their power and influence to spread lies to deceive the people so that many would die. 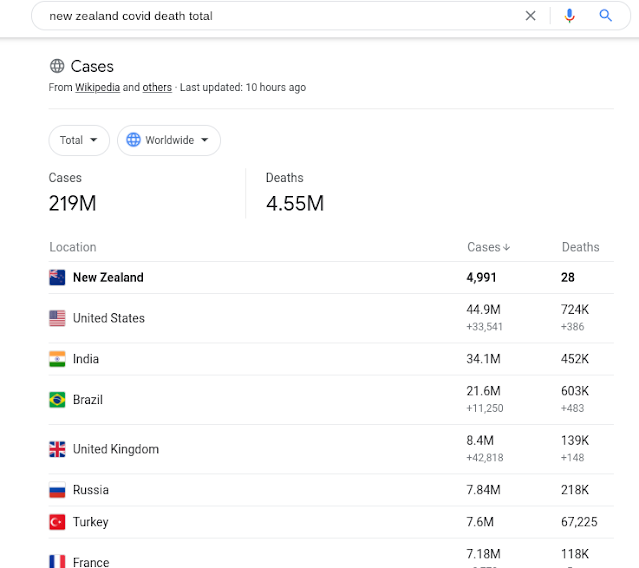 Outline of whats going on:
'Crimes Against Humanity': Hayes On Holding Leaders Accountable For Covid Failure

“This is the first time I've seen some official action taken that accurately represents how I feel about the crimes we have all witnessed,” says Chris Hayes on a panel finding Brazil's president at fault for their botched Covid response. “Bolsonaro and Trump, along with several others like them around the world, willfully got hundreds of thousands of people killed.”

Republicans Choose Cries Of Freedom Over Science And Mandates
Senior columnist at Bloomberg Opinion Tim O’Brien and director of the Republican Accountability Project Olivia Troye react to the resistance from Republicans to vaccine and mask mandates.

'More Of A Lunatic Than Trump': MAGA Gov. DeSantis Touts COVID ‘Success’ As ‘Bodies Pile Up’

A judge has found that Florida Governor Ron DeSantis cannot ban mask mandates in school. The MAGA governor remains isolated in his stance against COVID safety measures, and even Trump is now encouraging people to get vaccinated. Physician and former DNC chair Howard Dean joins MSNBC’s Ari Melber to discuss
Trump Wave Crashing? Dean Hits Hannity, Carlson For COVID Lies As Cases Surge
The FDA has given full approval to Pfizer’s two-dose vaccine in a move that could spur more Americans to get vaccinated. The approval comes as many Southern states are seeing a dramatic rise in cases and hospitalizations.
Trump Rally Crowd Boos Vaccines, Pfizer Shot Gets Full FDA Approval: A Closer Look
Seth takes a closer look at the crowd at a Trump rally booing COVID-19 vaccines before the FDA finally granted full approval to the Pfizer vaccine.
Band of Bullsh*tters: Freedom is Contagious | The Daily Show
Band of Bullsh*tters: When fighting a vaccine is the same as fighting Hitler