Trump The Pro-Pedophile Incestuous Creep: Did Trump Turn The GOP Into A Den Of Pedophiles Or Were They Always Pedophiles & Thus Created QAnon For Cover?

Previously:
1. Trump The Terrorist: Every Opportunity Trump Has Had He Has Used To Undermine The Health & Safety Of The American People And The GOP Have Supported Him Gleefully
2. Crimes Against Humanity: Jesus Says "Love Thy Neighbor" While The Christian Rights Response To Covid (Led By Trump, Fox News & The GOP) Is "Risk Thy Neighbors Life" Or Even "Kill Thy Neighbor"... IN THE NAME OF FREEDOM!
This post simply outlines, with news videos, Trump supporting confirmed pedophiliacs and making non-stop incestuous comments about his daughter . Taken together this reflects a disgusting pattern that shows Trump is a pedophile or at least pro-pedophilia. Whats also interesting is that Tucker is also an open pedophile that doesn't get any attention, indicating there is a whole den of these pedos in the GOP and Fox. Apparently the right is OK with pedophiliacs if they support the right politically! That aspect is also covered below.
Trump wishes a close friend of his, and associate and helper of a confirmed pedophile, well.

CNN: Trump on Epstein confidante Ghislaine Maxwell: I wish her wellCNN: President Donald Trump that he wishes Ghislaine Maxwell "well," as she faces charges for recruiting, grooming and ultimately sexually abusing minors as young as 14 as Jeffrey Epstein's alleged accomplice. "I just wish her well, frankly," Trump said during a White House press briefing on the coronavirus pandemic. Trump acknowledged that he has met Maxwell "numerous times" over the years, but said he hasn't been following her case. The President was also asked whether he believes Maxwell will turn on powerful men, including Prince Andrew, who has faced public pressure to explain his relationship with Epstein and one of his accusers, Virginia Roberts Giuffre. Giuffre has alleged that she was forced into sexual encounters with the prince while she was underage. rump replied on Maxwell, "I don't know. I haven't really been following it too much. I just wish her well, frankly. I've met her numerous times over the years, especially since I lived in Palm Beach. I guess they lived in Palm Beach. But I wish her well. Whatever it is. I don't know the situation with Prince Andrew. Just don't know. Not aware of it." CNN #News

Trump shares his sexual perspective on his baby daughter:

Trump even defended Matt Gatez while being investigated by the FBI for trafficking underage girls for sex;

“Congressman Matt Gaetz has never asked me for a pardon,” reads Trump’s Wednesday statement. “It must also be remembered that he has totally denied the accusations against him.”

On Tuesday night, the New York Times reported that Gaetz, in the final weeks of Trump’s presidency, approached the White House for “blanket preemptive pardons for himself and unidentified congressional aides.” The request came as the Justice Department began questioning Gaetz about his alleged sexual relationship with a 17-year-old. Trump’s response on Wednesday appears carefully worded to note that Gaetz did not ask him personally for such pardons—never mind that the Times never reported that.

As for the allegations of sex trafficking a minor, paying for sex, and other sordid details that have emerged in the past week, Trump merely noted that Gaetz denies them all. That rather milquetoast defense is a good reminder that Trump, who stands credibly accused by more than 20 women of sexual assault and misconduct, also denies the allegations against him.

Some more revealing videos:
Donald Trump On Tape: I Grab Women "By The Pu**y”

#7 Chatty foreplay with Stormy (covered above)

When asked what he and his daughter both consider their favorite things, Trump answered, “I was going to say sex, but I can relate to [golf and real estate].”

#5: Would Ivanka make a great Playmate?

“Ivanka posing for Playboy would be really disappointing… not really. But it would depend on what was inside the magazine…I don’t think Ivanka would [do a nude shoot] inside the magazine, Although she does have a very nice figure. I’ve said that if Ivanka weren’t my daughter, perhaps I’d be dating her.”

“You know who’s one of the great beauties of the world, according to everybody? And I helped create her. Ivanka. My daughter, Ivanka. She’s 6 feet tall, she’s got the best body.”

Journalist Julia Ioffe’s Politico contract was terminated during the presidential transition after she tweeted, “Either Trump is fucking his daughter or he’s shirking nepotism laws. Which is worse?” The tweet linked to a report in The Hill that claimed Ivanka Trump was eyeing the White House office space traditionally reserved for the First Lady.

“Yeah, she’s really something, and what a beauty, that one. If I weren’t happily married and, ya know, her father….”

“Is it wrong to be more sexually attracted to your own daughter than your wife?”

What's interesting that a a right wing Christian movement has emerged in the Republican party called QAnon who believe that pedophile rings are operating in the United States at the highest levels. What's interesting is that there are pedophiles who operate openly but only in the Republican party which they refuse to see because of Christian reasons! Its hilarious. Here is an old video mocking this behavior;

LOCKED IN WITH ROY MOORE - Jordan realizes that there's no escape from supporting Roy Moore as more sexual assault allegations surface against the Republican Senate nominee.This is one of the crazy defenses the "smart" Christians of Alabama came up with. Apparently Mary & Josephs age was relevant despite Jesus being born to a virgin. Either the Christians don't really believe Mary was a virgin when Jesus was born or they are dumber than nails... 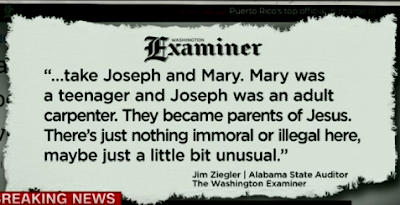 The rights response can be summarized as; 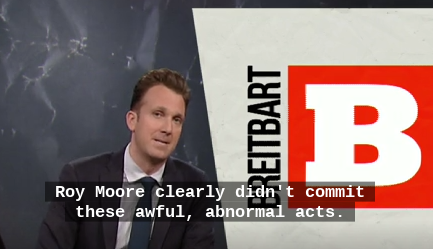 Some of the rights excuses are great (except for the pedophilia part... but they are too creepy or crazy to see it that way!);

Stories About The Other Defenders Of These Pedophiles

GOP Senate candidate Roy Moore suggested 9/11 was punishment for "legitimized sodomy," but top media outlets just call him a "firebrand" Moore has called homosexuality “the same thing” as having sex with a cow, repeatedly asserted that “homosexual conduct should be illegal,” and was kicked off Alabama’s Supreme Court for discriminating against same-sex couples
Roy Moore and the rot in conservative politics Some prominent conservatives would rather defend a reported pedophile than lose an election; that choice should haunt them
"Perfectly legitimate": How right-wing media figures tried to play defense for Roy Moore
Alex Jones lies about child molestation report against Roy Moore in order to dismiss it Jones: “Roy Moore told girls they were purty. Whoo. He didn’t try to take them out, he didn’t try to have sex with them, but you know what he told them they were purty”Breitbart’s Joel Pollak argues Roy Moore’s reported sexual relationships with teenagers were “perfectly legitimate” Breitbart is defending Moore even after multiple women spoke out about Moore soliciting themBannon to stump for Roy Moore in Alabama
Breitbart's Joel Pollak cites a Ringo Starr song to defend Roy Moore against child molestation allegationsBreitbart radio guest: The left is criticizing Roy Moore, but “they’ve been saying ‘love is love’ for years” Breitbart editor-in-chief also suggests another Moore accuser lied about her age: "What if we find out [Corfman] wasn't 14? What if we find out that she's older?"
On CNN, Alabama political reporter compares Roy Moore's alleged sexual abuse to stealing a lawn mower Brandon Moseley: If "Roy Moore had stolen a lawn mower when he was 21, that's bad," but it's not a reason to "throw him off the ballot"
Fox's Ed Rollins bemoans "the morality police" for calling on Roy Moore to exit AL Senate race
Breitbart tried to help Roy Moore, but bolstered Washington Post reporting instead Steve Bannon’s publication is doing whatever it can to save Moore’s troubled candidacy
CNN's New Day highlights how the Fox News propaganda mill downplays Roy Moore's sexual misconduct, but hypes Uranium One “scandal” Chris Cuomo: "These are pundits, not journalists"
Of course there are more examples but that is enough for this post.