{Mainstream Documentary - Lost Civilizations} Atlantis ... Has An Ancient Lost Megalithic City Been Discovered & Ignored Off The Coast Of Cuba?

This documentary takes a thorough look at the legend of Atlantis. Malta is explored as a possible site for Atlantis because of its megalithic stone structures, but Gobekli Tepe's stone structures are much older, so the argument that Malta was the most advanced culture of ancient times before the Egyptians isn't necessarily true. Bahamas are explored for the 'Bimini Road' covering the possibility that the Bahamas may have had an ice age culture. Possibility of a comet destroying Atlantis is noted. Underwater structures off the island of Cuba are explored with sonar that are over 2000 feet deep and appear to have the structure of an ancient Mayan pyramidal city. The Yucatan people have a legend that they came from an island that sunk in one day to the east of Mexico, that may be the story of Atlantis from the other side of the ocean situating Atlantis on a sunken island off the coast of Cuba... or it could be older. Maybe something that was above water at the last glacial maximum. Finally, Santorini is explored as a city buried by volcanic ash but it doesn't fit all the criteria noted by Plato. Even Pompei was destroyed by a volcano. The structures off the coats of Cuba haven't been explored enough to reach a definite conclusion.

Note: The following is a screen shot from 34 minutes into the video showing an artists impression of what the sonar scans off of Cuba reveal. The problem is that these structures are too deep to fit the pattern of most ice age civilizations, as Robert Schoch explains, but even the Sphinx had no cultural precedents that mainstream could accept to date it older than 4500 years ago till Gobekli Tepe. Robert Schoch was the geologist who confirmed the rain erosion patterns on the Sphinx making it older than what the mainstream suggests (and with the discovery of Gobekli Tepe, old stone building cultures are known to exist). Until the site is properly explored for structures and possible sinking (or not) it can't be dismissed. Simply finding Gobekli Tepe and other stone structures would suggest there might be older and bigger stones underwater. This could be a site that sank or something from an earlier time (back when stone bracelets were being made by Denisovans, over 40,000 years ago)! 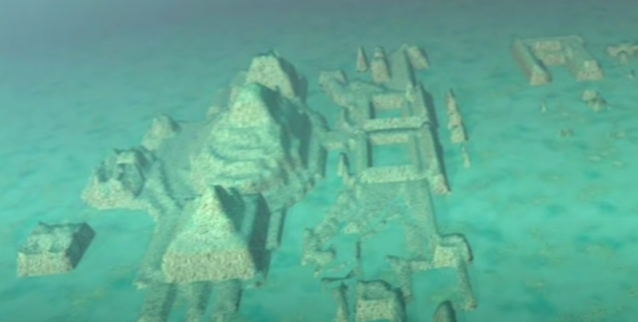 Video Description: A disaster is looming.  A fabulous city, rich in culture, and technological advances, is about to be destroyed.  Buildings, people, an entire civilisation, swept away by an overwhelming natural disaster.  The legend has entranced scientists and scholars for centuries.

In this episode Naked Science goes in search of the most enduring myth of all - The City of Atlantis - lost beneath the waves to a massive natural cataclysm some 11,000 years ago.  We know very little of Atlantis, in fact were it not for the writings of the Greek philosopher Plato we might not have encountered it at all.  Plato, recounting a story he heard as a child, described a huge metropolis, rich in fine art, architecture and culture.  The city was destroyed in the space of a day and a night, sunk beneath the waves for eternity by a massive natural cataclysm.  For thousands of years the tale remained an obscure yet tantalising fable until an American by the name of Ignatius Donnelly reignited the idea, bringing it to worldwide attention and sending archaeologists and trophy hunters alike across the globe in its wake.