Background:
Fox News Are Just White Supremacists Using "The Nazi Mirror Tactic" Being Given A Free Pass By The Media

GOP's "Fox News" will often lie to its innocent viewers in the same way the Nazis did, i.e. pretend others have their own traits (they will also lie in a way that is so silly you can't help but feel sorry for the poor Americans who believe their crap, left to fend for themselves against our party of terrorists and traitors). In any case, Fox News functions above the law, so to speak, as media pretends they are a real news station that doesn't need to be fought as a station of lies because they are number one and that would be impolite (or some other ridiculous piece of logic such as that). But thier viewers think they are being told the truth... that means they would turn on thier own party/"leaders" if they knew the truth (something like 9/11 would be great to get the Republicans to take care of the Nazis terrorists that have infiltrated this Nation). Anyways, here is an example of Hannity using this Nazi tactic (a tactic they use on a daily basis in their war on the Constitution, truth and any group of Citizens they can scapegoat or maliciously attack).

Sean Hannity and guests claim only states run by Democrats have homeless people Hannity: "There's one commonality. This is not happening in Florida or Texas or states that have zero income tax."


SEAN HANNITY (HOST): There's one commonality. This is not happening in Florida or Texas or states that have zero income tax. This is happening in big cities where they have massive amounts of taxation.
...
PAM BONDI: It's all these liberal cities.
HANNITY: It begs the question Governor, what are they doing with all the money that they're confiscating from people in their states?
...
We went to San Francisco twice, a mile from Nancy Pelosi's, you know, gated community and a mile from her office right in the middle, feces all over the place, needles all over the place, no help. She can't raise money from all of those rich San Francisco liberals that she lives next to and build a place with a shower, counseling, food, and help for these people?

What Hannity is telling the few poor people watching his show (who will then tell others) are total lies if facts, rather than medieval style propaganda, is taken into account;

USA Today: Midterms: Poorest states have Republican legislatures, and richest have Democratic ones
What you see is exactly the reverse of our cultural mythology: Heading into midterms, Republicans are very much the party of the poor and Democrats are the party of the rich. This seemingly sounds nuts. It isn’t. Thirty-two states have Republican-controlled legislatures. Eighteen of the 19 poorest states have legislatures where both chambers are Republican controlled. New Mexico (46th richest, fifth poorest) is Democratic. But there isn’t another blue or purple state until you get to purple Maine (31st richest, 20th poorest) with its “split” legislature of one party in each chamber. All the states in between (such as Tennessee and Florida) are Republican, both chambers. So is Michigan, where Republicans hold all high state offices (where Donald Trump won in 2016). Above New Mexico, you jump all the way to middle of the pack Vermont (27th richest, 24th poorest) to find a state with both legislative chambers held by Democrats.


A new report reveals that almost all of the states where people earn the least are controlled by Republicans, while the states where people make the most money are almost exclusively led by Democratic politicians.
USA Today recently ranked the states from poorest to richest, using the median household income figures from the U.S. Census Bureau’s 2017 American Community Survey. And while President Trump credits his policies with transforming the American economy he inherited from Barack Obama from “pretty good” to “pretty good,” the state-by-state numbers show that the wealthier states are mostly under Democratic control, while the poorest states are almost exclusively controlled by the GOP.
According to the National Council of State Legislatures, Republicans control both chambers of the legislatures in eight of the nineteen poorest states, with New Mexico being the lone GOP holdout. Nine of the 10 poorest states also have Republican governors.
Six of the 10 states with the highest median incomes are controlled by Democratic legislatures and six also elected Republican governors. And while Republicans control the House, Senate and governorship in eight of the states where people make the least money, New Hampshire is the only state in the top 10 that is totally controlled by Republicans. In fact, Democrats have at least two-thirds control in seven of the 10 states whose residents make the most money.

Situation: Hannity/GOP running with the claim that thier fake napkin economics is what is causing this stimulus led economic boom after the GOP economic crash in 2008, based on the same lack of legislation, tax cuts and oversight as today ... so we know what history dictates will happen to this economy the GOP/Plutocrats/Oligarchs pulls us towards again and again, always harming the many at the cost of the few and always getting away with it despite this being so ancient and debunked that its not even considered to be economic science anymore (not accepting mainstream science after decades of investigation is actually normal for the GOP as their war on Climate Science suggests).


Note: "The Nazi Mirror Tactic" Fox News and the GOP (who take their talking points from Fox) are using is as follows: 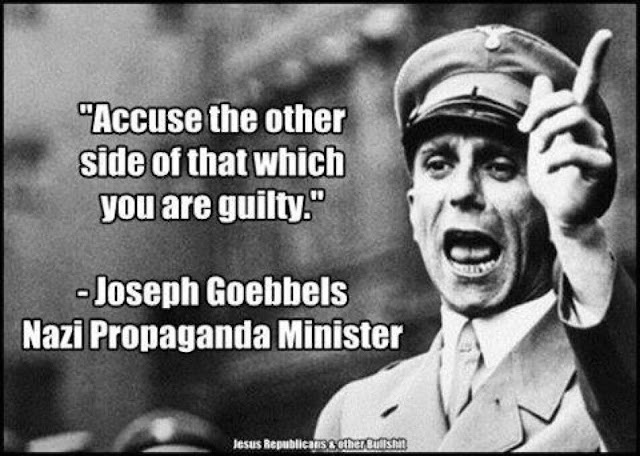