The Pussycrats: The Democrats Need To Grow A Backbone

The Democrats tendency is to do nothing for their base (thus losing credibility) because they are too busy worrying about appealing to the people not in their base, who, more often than not, hate them as that's the divisive politics the GOP uses to win, year after year, decade after decade. Rather than treat the GOP as the anti-American and Nazi-like organization that it has become, the Democrats try to treat them like honorable Americans, and things can only get worse from such a cowardly approach to enemies of the people. The following outlines this age old problem of the Democrats being too much of cowards to deal with the fundamentalist GOP.

Daily Show: OBAMA AND THE PUSSY'CRATS 11/6/2014 After holding off on several important legislative decisions until after the midterm elections, the Obama administration must decide how to handle divisive political issues.


Note:
"The Democrats 2014 strategy, instead of doing things that the people who voted for them would like, they decided to not do anything so as not to offend the voters who already didn't like them." Jon Stewart 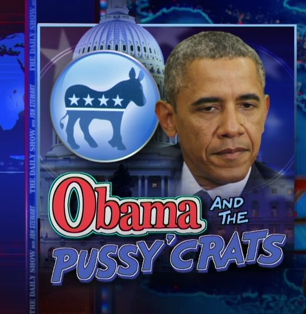 Or to put that another way. 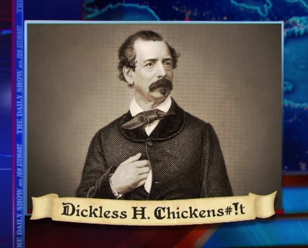 Moment Of Zen - MSNBC: GOP thanks Dems for keeping Obama on the bench Today members of the GOP poked fun at democrats that backed away from aligning themselves with President Obama before midterms.

NBC: Robert Mueller's statement made the Democrats look like cowards Trump sees a Democratic Congress reluctant to wield the impeachment power voters gave it in the midterms. And he may be right.


Last November, the American people overwhelmingly elected a new majority in the House of Representatives, giving Democrats the power to impeach President Donald J. Trump — if it was warranted. But Wednesday, special counsel Robert Mueller publicly reiteratedwhat his report already made clear: that “if we had confidence that the president clearly did not commit a crime, we would have said that.” Put another way, Mueller noted that despite what Trump might think or tweet, he was not an exonerated man.
Democrats have a version of the report, and they have Mueller’s clear interpretation of the facts in it. And what have they done? Issued a lot of strongly worded statements, for one. Why did Democrats ask the American people to grant them the power of the majority if they are so reluctant to use it to protect the sovereignty of Congress?
Trump, perhaps more than any political figure of our time, is preoccupied with the optics of force and strength. What he sees is a Democratic Congress reluctant to wield the power the voters gave them in the midterms. He sees hesitancy and division. Mueller’s report and his subsequent press conference today has only made this clearer.
Notice that the words “insufficient evidence” were not a part of Mueller’s statement, despite what the president immediately and falsely claimed on Twitter. Also in contrast to Attorney General William Barr’s statement on the report, Mueller never uttered Trump’s favorite and false refrain, “no collusion.”
The other week, I was talking with MSNBC host Joy Reid and she asked me what I thought the difference between Republicans and Democrats was when it came to congressional investigations. I spent the better part of a decade working on Capitol Hill for Republicans, including at the House Oversight Committee during the Obama years. I told her that Republicans love to fight and Democrats love to think.
Republicans view Democrats as the political party that’s scared of its own shadow. Republicans aren’t preoccupied with decency or morality, they just want to win. It’s why the GOP House members always felt like we had an advantage in our fights with the Obama administration over subpoenas and investigations.
Democrats worry about the political ramifications of impeachment and so they make strong statements; they say they won’t tolerate the president’s assault on checks and balances but they do nothing of substance to stop him. Trump sees that inaction as a license to take a sledgehammer to Congress’ oversight authority.
Read more.

Salon: Censure rather than impeach? Hell no, Democrats — that's inexcusable cowardice There's a push to censure Trump instead of impeaching him. Do Democrats actually want to look like waffling wimps?

New Republic: Democrats Are Hoping You Don’t Understand What “Impeachment” Entails Focusing on how it would "fail" in the Senate is a handy way to duck responsibility for a full investigation into the Trump administration.

Universal Healthcare (even Medicare for All) could have been an easy slam dunk in Obama's first term since Dems had both the House and Senate but they listened to Republicans and have thus literally accomplished nothing. Republicans, by contrast, have taken extreme measures using their powers of Congress and the Senate while lying to the people at the same time (both to thier base and generally). Even Obama's economy has been usurped by lies and is set to break with the huge deficit the Republicans are hypocritically piling on. The old strategy of facing the Republicans - as honorable Americans - doesn't work.

Democrats Need to Be as Relentless as Republicans | The Daily Show
Neal Brennan pleads with Democrats to use the GOP’s never-back-down approach when passing legislation.

The Republicans ENTIRE argument for over a decade has been that they are the true carriers of truth, justice and the American way. Clearly, everyone else isn't. Haters are gonna hate and there is nothing you can do to change them. Fox is going to lie and help the GOP lie and there is something the media can do to deal with that. But the media doesn't like conflict.

SCORN IN THE U.S.A. 10/18/2011 It must be tough for Republicans to love America so much but hate almost three-quarters of the people living in it.


You can't negotiate with terrorists because that would only encourage such behavior. The GOP are nothing if not terrorists and dealing with them like a civilized first nation party veils the truth and thus makes your strategy ineffective and/or weak. You have to treat Nazis like Nazis.

Note: If fake videos bother you, then make your own fake videos. Get with the times.

OUTRAGE OVER A DOCTORED VIDEO OF NANCY PELOSI 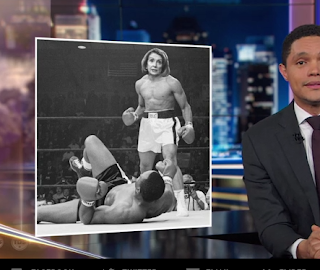