Bread Making Is Confirmed At A Minimum Of 23,000 Years Ago. This Means The Earliest Cereal Production Sites Are Now Underwater Given Sea Level Changes Over The Last 20,000 Years.

Evidence for baking going back 23,000 years has been discovered. If bread making has been confirmed when sea levels were at their lowest then logically it follows that all the oldest bread making and cereal processing sites will now be underwater. Based on the sea level chart used below we are talking about over 426 feet of water. Now the evidence in logical sequence;

Weiss and colleagues from the Smithsonian Institution and University of Haifa found evidence of ancient cereal production at a site called Ohalo II, located in present-day Israel and known from previous research to be 23,000 years old.

Within the remains of a hut at this site, Weiss and his colleagues found 150 starch granules buried in crevices in a footlong stone apparently used to grind grains. Comprehensive studies of these starch molecules revealed that more than half were from the family that includes barley and wheat. No starches from roots or tubers were found lodged in the stone, suggesting it was used only as a cereal-processing implement.

Several meters away, the archaeologists found a special alignment of burned stones, similar to hearthlike ovens used by recent and modern nomads and hunter-gatherers. This blackened area was covered with a mixture of ashes and barley grains, suggesting that dough made from grain flour was baked there. 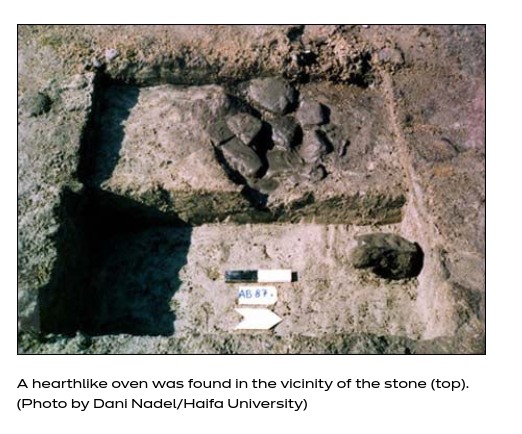 We know grain production became popular a long time ago.

Using Paleolithic conical mortars carved into bedrock, a team of experimental archaeologists has reconstructed how the Natufian people – hunter-gatherers who lived in the Levant region between about 12,500 and 10,200 years ago – processed wild barley to produce groat meals, as well as a delicacy that might be termed ‘proto-pita’ – small loaves of coal-baked, unleavened bread.

In fact, based on a genetic study, it appears that grain became something that people gathered regularly and in large amounts, 30,000 years ago! We know that people have been using different temperatures of heat to temper their weapons way back in the middle stone age, so making an oven for grain, with gathering being an important part of a hunter-gatherer culture, is not that big of a leap.

Cereal Domestication May Have Started 10,000 Years Earlier than Scientists Thought
Wild plants contain a gene which enables them to spread or shatter their seeds widely.
When a plant begins to be gathered on a large scale, human activity alters its evolution, changing this gene and causing the plant to retain its seeds instead of spreading them — thus adapting it to the human environment, and eventually agriculture.
University of Warwick Professor Robin Allaby and his colleagues from University College London and the Universities of Tsukuba and Warwick made calculations from archaeobotanical remains of einkorn, emmer wheat, rice, and barley that contained ‘non-shattering’ genes.
“Our shows that crop plants adapted to domestication exponentially around 8,000 years ago, with the emergence of sickle farming technology, but also that selection changed over time,” the researchers said.
“It pinpoints the origins of the selective pressures leading to crop domestication much earlier, and in geological eras considered inhospitable to farming.”
In Tell Qaramel, an area of modern day northern Syria, the study demonstrates evidence of einkorn wheat (Triticum monococcum) being affected up to 30,000 years ago.
Furthermore, emmer wheat (Triticum dicoccon) is proved to have been affected 25,000 years ago in the Southern Levant, barley (Hordeum vulgare) in the same geographical region over 21,000 years ago, and rice (Oryza sativa) in South, East and South-East Asia more than 13,000 years ago.
“Demonstrating that crops were being gathered to the extent of being pushed towards domestication up to 30,000 years ago proves the existence of dense populations of people at this time,” the scientists said.
“This study changes the nature of the debate about the origins of agriculture, showing that very long term natural processes seem to lead to domestication — putting us on a par with the natural world, where we have species like ants that have domesticated fungi, for instance,” Professor Allaby said.

This means that cereals were being gathered and used since the last glacial maximum. Most likely to make bread, in my opinion, and the earliest sites of interest (even large community ovens!) are likely under over 400 feet of water based on sea level change over the last 30,000 years.

First, note that we know that the biggest settlements are always on the coastlines or close to it. Now look at the chart of sea levels to the 30 thousand year mark when cereal gathering is likely to have become common practice based on the genetic study above. We see that sea levels continued to fall for another 1000 years so people's technology would be expanding over time as they tinker and they would also be moving closer towards the coasts. 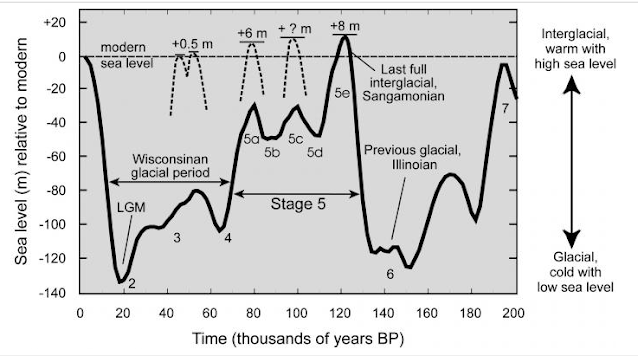 The above confirmed evidence of bread making goes back to 23000 years ago. 23,000 years ago the earth was a very different place with alot of land of that time now underwater all over the world. That means that the oldest evidence of ovens and bread making will most likely be under 426 feet of water.

Above chart is from this page:

Probably, the factor that influences sea levels on the planet more than any other is the proportion of the Earth’s water that is in the form of ice at any point in time.

The figure illustrates this very well. Take a look at the curve on the graph, obtained by analyzing oxygen isotopes in ice cores. It represents the fluctuations in sea level from 200,000 years ago to the present (going from right to left on the x-axis). Approximately 125,000 years ago, the sea level was approximately 8 meters higher than it is today. This was during the Sangamonian Interglacial, the last time the north polar ice cap completely melted. After this peak in sea level, ice returned to the planet. And the Wisconsinan Glacial period followed between 80,000 and 20,000 years ago when a glacial maximum, and sea level low stand (more than 130 m lower than today) took place. This is what most people mean when they refer to the "ice age". Glaciers covered much of North America. Following the glacial maximum, we see sea levels rising rapidly - the curve is about as steep as the one leading up to the Sangamonian Interglacial. It began to level off about 5,000 years ago, leading to fairly slow sea level rise in recent geologic time and the sea level human society has been accustomed to.