Background/Context:
1. BREAKING: "WTC 7 Did Not Collapse from Fire" Dr. Leroy Hulsey... Engineering Experts, 9/11 Families And A Former NIST Employee Call On Congress To Launch A New Investigation Into 9/11!
2. 9/11 News: Video Shows How World Trade Center Building # 7 Fell And How Badly The NIST Got The Modeling Of The Collapse Wrong
3. 9/11 Analysis: The Strange FBI 9/11 Attack Photos That Would Have Provoked An Inquiry On ANY TV Detective Show But Not In Real Life
Before going into this security video I would like to point out that the "plane" appears at 5 seconds and a tiny bit of it at 1 minute 32 seconds. No close up analysis using computers of this video exists online that I could find, just an nontransparent analysis from the Pentagon saying that this was definitely a passenger airliner despite contradictory visual evidence as I will show:
AP: Security video of plane hitting Pentagon - 1. Security camera view of plane smashing into Pentagon 2. Second security camera view of plane smashing into Pentagon AP Television
The following screen shot is taken at 5 seconds. 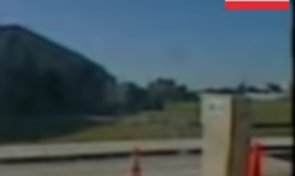 It appears to be the plane. Simply comparing it with the gas pump and the size of the building suggests this plane is no bigger than a drone. If the argument is made that this is just the wing then there is no video of the plane period and the plane seems to be flying a little beneath level ground (i.e. as if the earth turned to water, or more like empty space since there is no trail or wake of any kind), given the size of a passenger plane vs a drone. Also, no red markings of the alleged plane, though given its size that point is moot. Notice the plane is just too close to the ground for it to be a wing or a passenger jet. But not too close to the ground, or flying too straight, to be a drone.
Close up shows a blurry image, but still no indication that it is anything other than a tiny plane.

I think its pretty clear that what was caught on the security camera was the - then - unknown drone which became famous later in media. Drone image: 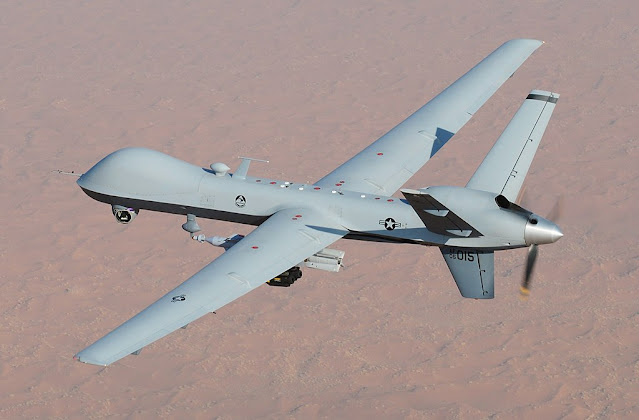 At 1:32 you find an even smaller view of the plane on the right edge of the screen. 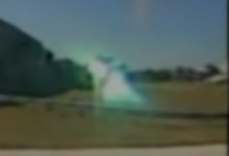 If the argument is made that this is just the wing then there is no video of the plane period and the plane seems to be flying a little beneath level ground, given the size of a passenger plane vs a drone. (i.e. as if the earth turned to water, or more like empty space since there is no trail or wake of any kind)
Analysis:
I have been looking into the events and facts of 9/11 for a while now but hadn't noticed the video in this post from a credible source. In the controversy that swirled around Marjorie and QAnon I got caught up on the Pentagon Plane part of the mystery and what the mainstream uses as evidence against it (Personally, the mainstream version of 9/11 sounds like a conspiracy theory to me as so many facts have to be ignored, like with the climate science denial part of the political debate that the media likes to help with). Till now I thought it was a missile that hit the Pentagon as the evidence of a plane crash doesn't exist. Three pictures of an aircraft, all with identifying marks on it - including the license plate - don't constitute evidence but an obvious frame... by comparison if a car crashed in your house and you only found the brand name and license plate and didn't get suspicious that would make you a complete idiot and moron unable to comprehend the facts in front of your eyes. Where did the car/plane go so fast from a crime scene? Anyways, now that I've seen an authorized copy of the video I don't think the Pentagon was hit by a missile but a drone armed with explosives, i.e. a mini plane. Both sides are right.
Here is the excerpt I'm basing this post on.
Media Matters: QAnon candidate Marjorie Taylor Greene is a 9/11 conspiracy theorist who claimed that there’s no evidence a plane crashed into the Pentagon Greene also falsely claimed that Obama “is a Muslim”
The claim that there was “never any evidence” of a plane hitting the Pentagon is a refrain of 9/11 conspiracy theories. In reality, video and photographic evidence show a plane hit the Pentagon.
Notice how the link to the video doesn't actually have the video (too obvious to even need to look!) but I did find the video online, which I embedded and analysed below. The photographic evidence is referring to the three pictures of pieces of plane identifying which plane it was with no other remains visible in ANY picture taken by the FBI anywhere.
The only thing left to analyse is the article which mostly argues against claims I haven't really made. Also, it begins by pointing to one piece of a plane and saying thats evidence enough like an old GOP political tactic. Looking at it further; Saying the plane bounced off the ground and dissipated its energy is just ridiculous. Saying the original/first observer of the anomalies at the Pentagon didn't provide a theory so people are just over imagining shows intellectual laziness and is also stupid. Its like reading a Fox News story. And this explanation: “This theory suits everyone — there are no Islamic extremists and everyone is happy. It eliminates reality.” is a total cop out. The idea that the 'plane burnt to a crisp thus leaving no evidence'... is unobservant as it doesn't explain why so much of the Pentagon office equipment, including wood didn't burn up but the passengers, luggage, and big parts of the plane did (everything except the license plate and a piece of metal identifying the plane, ridiculous).