An Exclusive Look At The 9/11 Terrorists In Their Den On 9/11: Pictures Of Dick Cheney Admiring His Handiwork On 9/11

Background:
BREAKING: "WTC 7 Did Not Collapse from Fire" Dr. Leroy Hulsey... Engineering Experts, 9/11 Families And A Former NIST Employee Call On Congress To Launch A New Investigation Into 9/11!

The context in the background above adds a new dimension to pictures taken on 9/11 that the Freedom of Information Act forced the Bush Administration to release... actually it was the Obama Administration that they got released under. The following looks at the treason and terrorism of 9/11 in action by looking at the leaders of that horrible attack on the day they did it...

“Dick Cheney watches television”: The four previously unseen 9/11 photos that will make you hate the evil VP all over again Feet up and watching TV. Maybe plotting the wars that would become our worst foreign policy blunders ever 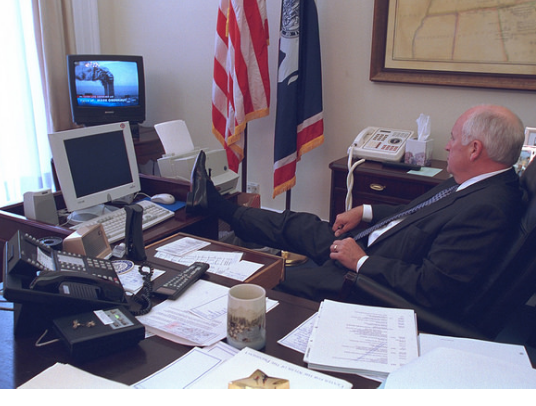 After a long day of treason Cheney is tired... or maybe he couldn't sleep the night before as he was tense before the action? 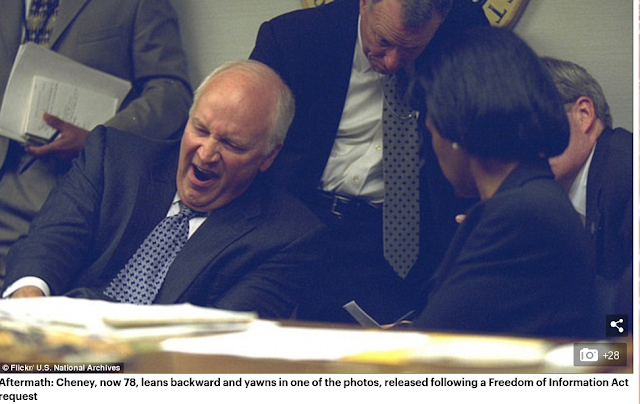 Here is Dick Cheney looking kinda guilty... did his wife figure out this was his handiwork? 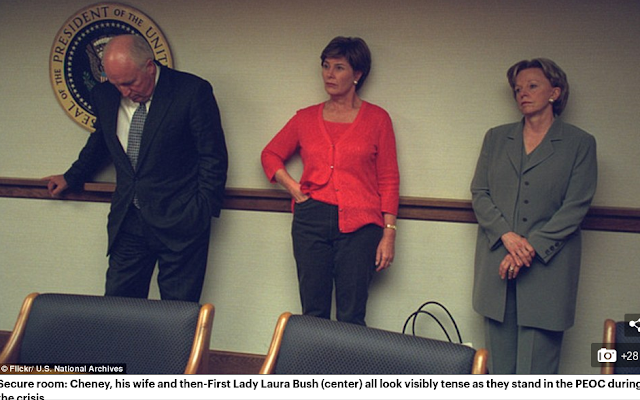 A smile from the terrorist  and traitor, Cheney 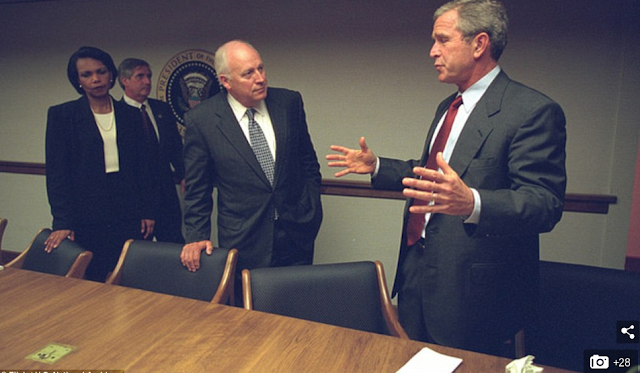 One person is tense and one isn't! 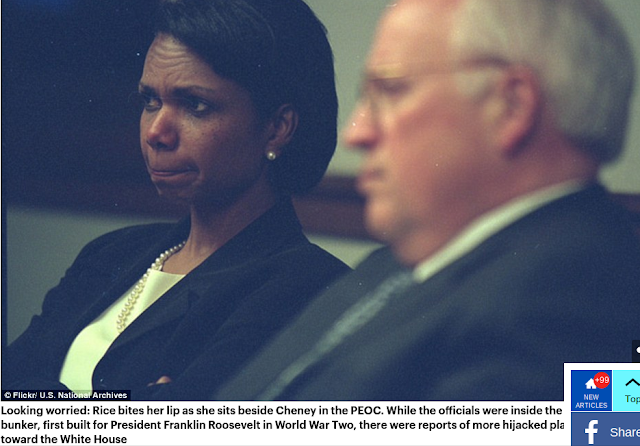 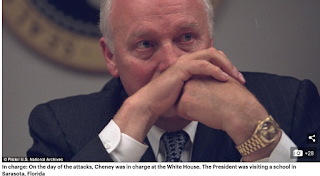 A smile? A feeling of having conquered America? 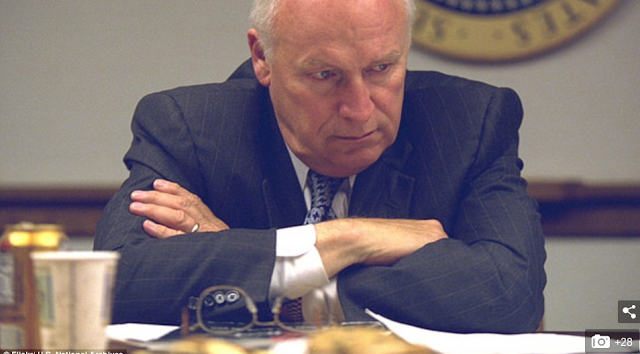 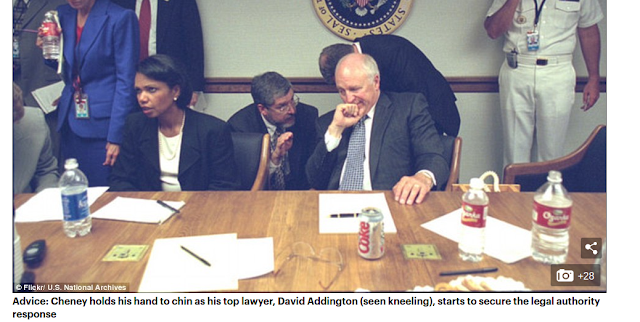 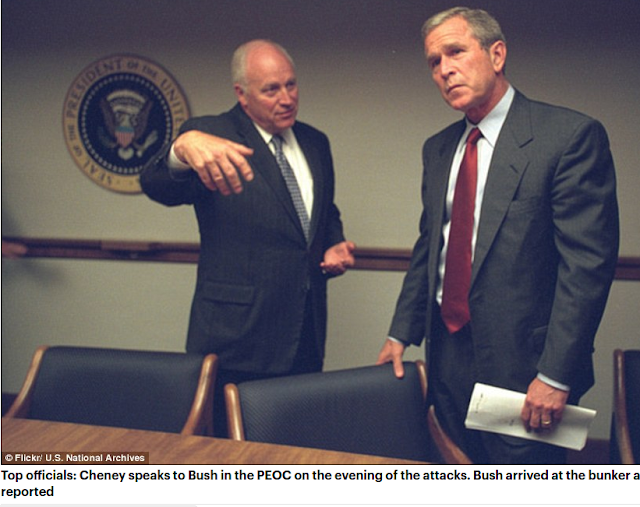 Here was Bush during the "attacks", by the way... 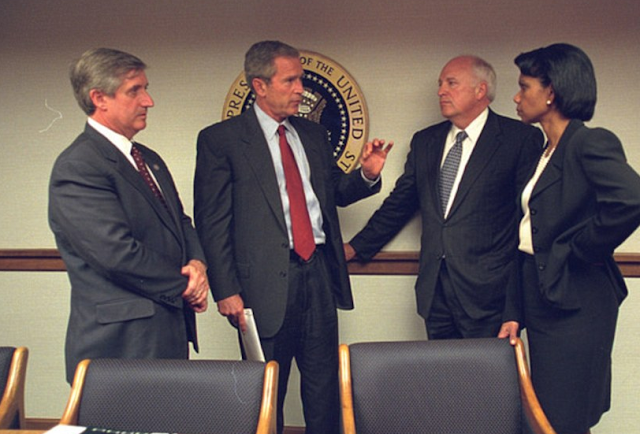 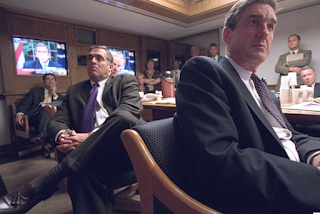 Anyone notice there are no frowny faces of Dick Cheney in response to his attack on America?

Miscellaneous Smoking Guns That Should Have Alerted Us To The Real Culprits Of 9/11 Sooner;


Video: On 9/9/2004, 9/11 Family Members, Citizen Researchers, and then Former Rep. Cynthia McKinney held what were called the "9/11 Omission Hearings" in New York City.

Senate Intelligence Committee: Bush and Cheney Misled us on Iraq In news that should surprise no one, a bipartisan report finds the Bush administration exaggerated threats of WMDs as well as Saddam/al Queda links.

WASHINGTON -- Claims by U.S. President George W. Bush and other top administration officials before the 2003 invasion of Iraq regarding Baghdad's ties to al Qaeda and its weapons of mass destruction (WMD) programs were generally not supported by the evidence that the U.S. intelligence community had at the time, according to a major new report by the Senate Intelligence Committee released Thursday.
The long-awaited report, the last in a series published over the past several years by the committee, found that Bush and Vice President Dick Cheney, in particular, frequently made assertions in the run-up to the war that key intelligence agencies could not substantiate or about which there was substantial disagreement within the intelligence community.

Talk about leaving a burden for the next president. Bush and Cheney left a disaster for President Obama to clean up. Our respect among the international community was in the toilet. Our economy was nearly left in ruins. And the Bush/Cheney Middle East playbook put Iran several steps closer to developing a nuclear weapon and gave them more power in the region than ever before. But thanks to President Obama and his willingness to slap sanctions on Iran and his focus on finding diplomatic solutions, it appears that Iran’s nuclear capabilities will be heavily restricted.

Video: THE JON STEWART MYSTERIES PRESENTS: THE CASE OF THE IRANIAN AGENT! 4/16/2015 Former Vice President Dick Cheney makes an ironic assertion about the legacy and burden of President Obama's administration.

Liz and Dick were not amused. The official propaganda line says that the Ayatollah was so shocked and awed by George W. Bush and Dick Cheney's big swinging leadership that when we invaded he threw his robe over his head and ran around in circles, screaming at his minions to tear up all plans to make a nuclear weapon before bursting into tears and taking to his bed for a good old fashioned cry.
That didn't actually happen. In fact, the invasion of Iraq was cheered by the Iranian regime; they all high fived each other over their good fortune. Who could have ever predicted that America would be so generous as to take out Iran's most hated rival on both a sectarian and nationalist basis for them? To then refuse to even engage in non-proliferation discussions, giving the regime the room to really crank up a nuclear program was just too kind.
And as for Iraq, Wallace had it right. The Bush administration left their successor with a terrible mess on his hands. Even the master dealmaker and four time bankrupt real estate mogul Donald Trump himself would have had a hard time extricating himself from that agreement. The Obama administration tried, much to the chagrin of his liberal supporters whose votes were largely based on his promise to get out. But the Bush administration and the Iraqi government had left them with very little to work with short of re-invading and putting the country under occupation.
According to the Cheneys' book, none of that is correct. It's a bizarroworld tour de force in which the Iraq war was a rousing American victory that resulted in the Middle East becoming a stable region where the Sunni and Shia were holding hands and promising to love one another. That is until Barack Obama came along and tore it all asunder with his weak and cowardly refusal to "lead."


When Dick Cheney told the truth about Iraq Before becoming vice president, Cheney acknowledged the country could disintegrate following a U.S. invasion

Stephan Richter’s recent “Iraq’s Predictable Fate” notes that then German Chancellor Gerhard Schröder had warned the George W. Bush administration in 2002 that the invasion of Iraq was ill-advised.
The majority of Americans — and both political parties — once cheered on that invasion. Americans belatedly have come to realize that they would have been much better off if Schröder’s advice had been heeded.
To be sure, only a tiny minority of Americans have been directly touched by the cost of the war in terms of American lives lost and limbs destroyed. But all Americans will long feel the fiscal burden of amortizing the money cost of the war, including the long-term medical and social support of the warriors sent out to fight that war.
And it is anybody’s guess what the Iraqi people might say now if they were polled on the benefits of the U.S. invasion.
Cheney in 1994 on Iraq


A tactic to cover up their crimes?...

Put the evil bastards on trial: The case for trying Bush, Cheney and more for war crimes The evidence for the prosecution is clear. Human decency requires putting the Bush administration on trial

But just as genuine legal experts have been appalled by the perversion of normal and normative legal process in the grand jury proceedings in St. Louis County and Staten Island, there’s been a sharp line drawn by human rights lawyers and advocates in response to the Senate torture report, calling for prosecutions to match the crimes.  A 2011 report from Human Rights Watch, “Getting Away With Torture: The Bush Administration and Mistreatment of Detainees,” argued, among other things, for the criminal prosecution of former President Bush, Vice President Cheney, Defense Secretary Rumsfeld and CIA Director George Tenet.  Nothing has changed since then, HRW executive director Kenneth Roth told Salon.
“We believe in 2011 and we believe just as strongly today that senior U.S. leaders have a case to answer for torture and war crimes,” Roth said. Although the Senate report’s focus is narrower than that earlier report—ignoring the issue of renditions and everything done by military as well—where it does focus, it has only reinforced what HRW has been arguing.
“I would say the evidence becomes even stronger for [prosecuting] the CIA leadership, because it's clear that they were turning a purposely blind eye even to reports of torture,” Roth continued. “The report talks a lot about how the CIA lied and covered up, but it doesn't change the fact that the basic practices were authorized, you know, waterboarding, sleep deprivation, things like that.” But also, “George Bush approved waterboarding by his own admission, he approved the CIA renditions program,”  while Cheney  “was the driving force behind many of the illegal detention and interrogation policies to begin with.”