Background/Context: How The CIA Has Been Attacking Iran Since 1953! Beginning With Bringing Down Their Democracy!

Trying to link Iran to 9/11, something the GOP did, is instant proof that the person is a lying traitor. Unless the person is a moron and Pompeo is not a moron if he was in the CIA (CIA are well known traitors who tortured innocent people using debunked torture techniques from the 60s to get false confessions, i.e. its been well known for ages that torture can get a person to say anything, so this was obviously a con unless the CIA are also uneducated an stupid, highly unlikely). Here is Pompeo and Pence using 9/11 on a country that had nothing to do with it like Cheney, Bush and Nentanyahu did with Iraq (its not even the same sect of Islam as the Saudis who allegedly attacked us on 9/11) {Note: Technical explanation of why the word Traitor is appropriate is here};

Are America and Iran on the Brink of War? | The Daily Show
The Daily Show with Trevor Noah Published on 19 Jun 2019 U.S. Secretary of State Mike Pompeo blames Iran for attacks on oil tankers in the Gulf of Oman, prompting the deployment of more U.S. troops to the region and raising the possibility of war with Iran.

Highlights: releases a video we are supposed to trust for no reason except the Government released it; 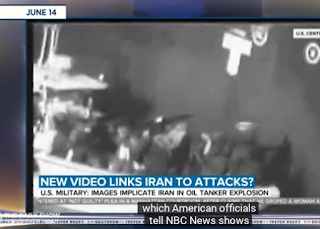 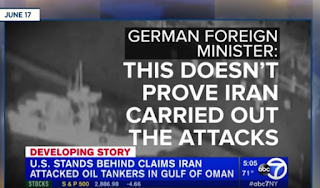 Lying and fearmongering to create war for oil is what America/GOP did last time; 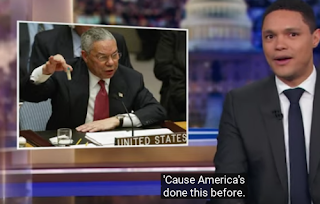 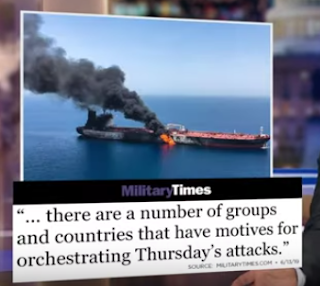 Pompeo using the same outdated and inappropriate and obvious tactic proving he is lying and a traitor; 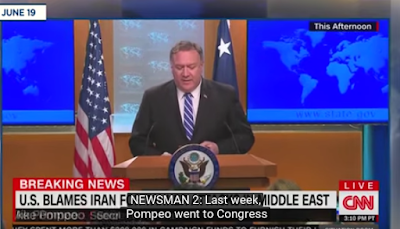 i.e. simply being "Muslim" is enough to go after an innocent country as per talking points in media for years as encouraged by the GOP after 9/11 as part of thier scapegoating strategy, willingly accepted by media. 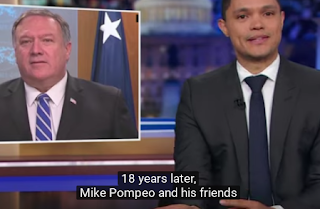 GOP always use the same playbook of lies and deceptions: With Iraq, Cheney lied and said Saddam had something to do with AL Qaeda and thus 9/11 (and now Pence is doing the same as Bush/Cheney/GOP did with Iraq, i.e. invoke 9/11. Something the GOP did.:

News report on how Pompeo gave no evidence for his assertions about Iran (and thus people are having flashbacks to the war of 2003, i.e. Iraq War and its con enabled by mainstream media as some are doing now);

Mike Pompeo Constructs Iran Narrative Moving US Toward War Footing | Rachel Maddow | MSNBC
Rachel Maddow reports on the speed with which Secretary of State Mike Pompeo blamed Iran for attacks on oil tankers, and the curious series of events he claims as context for the attacks.

Its clear Pompeo is claiming everything bad that happens in the region is from Iran without proof. Maybe even orchestrating attacks in the middle east to blame on Iran such as the oil tanker bombing? This party did this before.

Here Pompeo's bullying strategy of picking on someone to get a reaction becomes obvious. Clealry Pomeo wants a war and is starting one with whatever resources he can, even intimidation. This war is not an accident. Its intentional manipulation by Pompeo to fulfill old goals by the GOP. (As Bush called it after he bombed the United State son 9/11, "the Axis of evil'. i.e. the perfect scapegoat in post 9/11 American media)


How GOP have been trying to pick a fight with Iran through bullying; 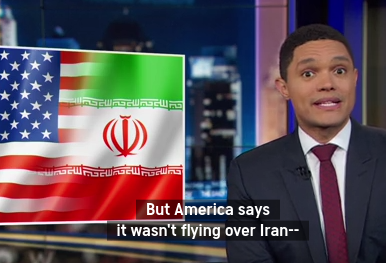 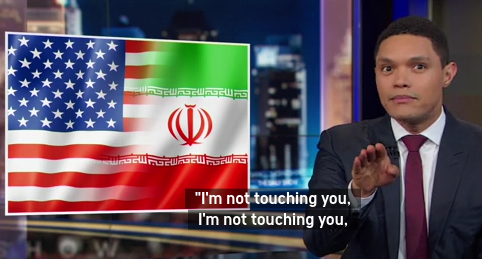 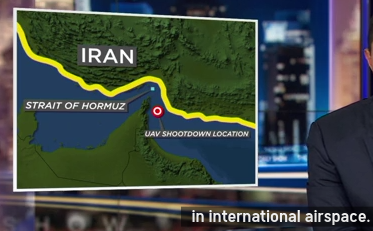 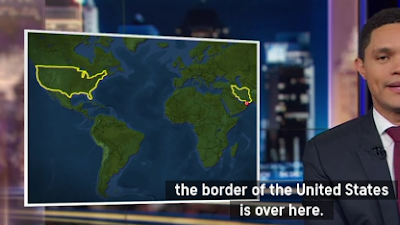 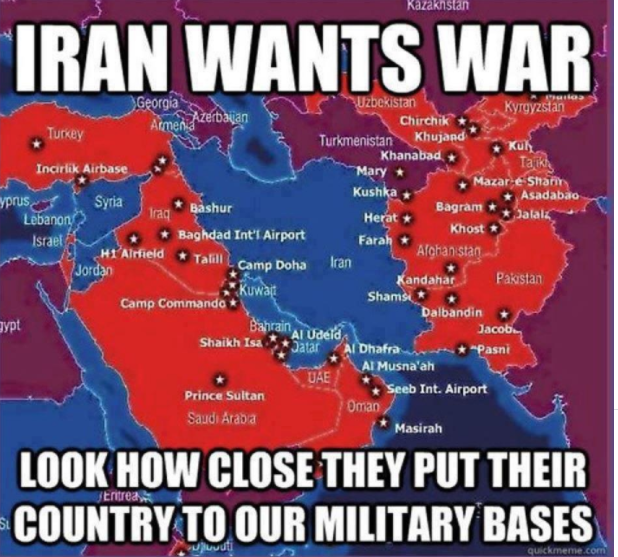 Another example: Here Pompeo blames Iran on Obama despite the fact that Obama had an internationally agreed upon agreement with Iran curbing nuclear power. The GOP literally had to fight democracy, diplomacy and America's National Security to get to the point where they removed a deal and put in place no deal with constant bullying of Iran in an attempt to get it to react.

Media Matters: Secretary Pompeo joins Fox & Friends to hype Iran as a threat to America and blame it on Obama Pompeo: The Obama administration gave Iran "the ability to put the terror team in place that we're seeing today, the very terror threat that we're facing"

BRAIN KILMEADE (CO-HOST): So Mr. Secretary, we understand that it's going to be an intense day today. Word is out that the Pentagon is asking for 5,000 troops to go into the region, it's revolving around the threat that you know about coming from Iran. What could you tell us here today?
MIKE POMPEO (SECRETARY OF STATE): So, the threat is real. It's been credible. Without getting into specifics, you can be sure that President Trump will ensure that we have all the resources necessary to respond in the event that the Islamic Republic of Iran should decide to attack Americans or American interests or some of our great soldiers, sailors, airmen, or Marines that are serving in that region, or the diplomats serving in Iraq or elsewhere. The exact force posture the president is looking at every day. We're evaluating the risks, making sure that we have it right. This is an important mission. We have 40 years of terror coming out of the Islamic Republic of Iran and President Trump is determined to change the course of that regime.
STEVE DOOCY (CO-HOST): There are stories that in the country of Iran, the sanctions have taken such a toll and the people are desperate. I mean, there's a lot going on, there's a lot of unrest in the country. So ultimately, the sanctions are working, the question is what do they do next.
POMPEO: Yeah. The sanctions have certainly had their intended effect. They have put constraints on the leadership in Iran's ability to foment terror. There are Hezbollah soldiers who are no longer being paid, or being paid a fraction of what they were being paid before. Their ability to expand their terror network around has been reduced. The previous administration took a different path. They underwrote that government, giving them hundreds of billions of dollars and the ability to put the terror team in place that we're seeing today, the very terror threat that we're facing. President Trump's taken a very different course of action. We are determined to stop not only their nuclear program and from them ever getting a nuclear weapon, but to prevent them from building up their missile program and conducting terror campaigns.
AINSLEY EARHARDT (CO-HOST): So the sanctions are working and they are retaliating as a result?
POMPEO: Yeah. I think that's true. It's a little more complicated than that in the sense of -- you have to remember the history, they killed 600 American soldiers long before our pressure.
EARHARDT: Just the ones that are unclassified that we know about.
POMPEO: That's right. Just before the pressure campaign, they blew up an embassy. There is a long history of Iranian terror that long predates our sanctions efforts. So, this isn't just about our sanctions. This is about the nature of this theocratic regime, these kleptocrats in Tehran. We're determined to push back against them.

Previously:
Tomi Lahren: "If the plan were to send a huge surge of land and war power to wipe out Iran and turn it into glass... that might actually solve the problem."
Fox & Friends guest says "I feel like we have been at war with Iran for 40 years" and likens escalating tensions to a bar fight
Fox's Brian Kilmeade blames Obama for Trump's unilateral withdrawal from Iran nuclear agreement


Moment of Zen: The setup before the bullying campaign to try and instigate a war.

Iran, Venezuela and China: Finalists for America’s Next Top Battle | The Daily Show
The Daily Show with Trevor Noah Published on 6 May 2019 America’s global standing weakens after a rescinded nuclear agreement with Iran, contradictory positions on Venezuela and increasing trade tensions with China. 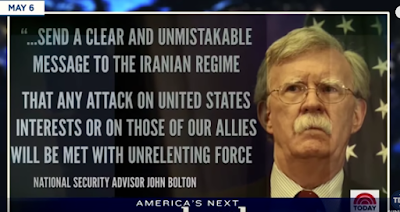 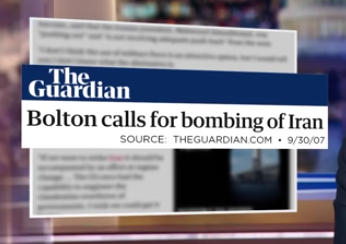 Expert argues Soleimani killing does not make the U.S. safer - Richard Haass of the Council on Foreign Relations discusses the impact of the killing of Gen. Qassem Soleimani, and why he doesn't believe the action benefits the U.S.


[Update Jan 8 2020] - Honorable Mention: Newt Gingrich decided to jump in and prove he is a traitor so I thought I should do him the honor of adding his words here for documentation purposes;


Newt Gingrich tries to connect Iran to 9/11 to justify regime change Gingrich falsely claimed that the 9/11 commission found Iran “directly helped the people who attacked us on 9/11 and killed 3,000 people”

After a U.S. airstrike ordered by President Donald Trump killed Iranian Maj. Gen. Qassem Soleimani, dramatically escalating tensions in the reason, Fox News contributor Newt Gingrich misleadingly tried to link Iran to 9/11 to justify pushing for regime change in Iran.
On January 7, Iran launched more than a dozen ballistic missiles at two U.S. military bases located in Iraq. The move was a significant attack from Iran and a clear retaliation for the airstrike that killed Soleimani.
On Wednesday morning’s edition of Fox & Friends, Fox News contributor Newt Gingrich pushed for regime change in Iran, insisting that it’s the best long-term option and that Iran is not “too big” of a country. In making his case, Gingrich claimed that Iran “get[s] away with an amazing number of things, including court findings and 9/11 Commission findings that they directly helped the people who attacked us on 9/11 and killed 3,000 people.” The show’s co-hosts did not counter his claim.
The push to link Iran with 9/11 echoes a tweet sent by Vice President Mike Pence over the weekend, which drew widespread criticism and was swiftly debunked as misleading. Although Pence’s spokesperson pointed to a State Department document that claims Iran permitted members of Al Qaeda to travel through Iran to Afghanistan, where some received military training, this is not evidence that Iran or Soleimani knowingly helped to carry out the attacks. Additionally, the 9/11 Commission Report found that Iran was not involved with and had no knowledge of the attacks that occurred on September 11.
Still, Gingrich tried to justify Soleimani’s assassination by saying Iran “directly helped” Al Qaeda carry out the talks. (There is actually evidence suggesting that Saudi Arabia, which the Trump administration considers to be a strong ally, actually did play a role in the 9/11 attacks, yet Trump took a previously undisclosed meeting with a top Saudi official only two days ago.)
Note that the fact that there is actually a link to Saudi Arabia for 9/11 and not for Iran further proves treason in addition to the fact that Iran is not the same sect of Islam as the people who allegedly attacked us on 9/11 but Saudi Arabia does (we need a real investigation to find out what happened, that includes all testimony and evidence).