Over 140 New Nazca Lines Found! And A Look At How A Plane Could Have Developed In The Americas From A Colony From Egypt


The Nazca lines are huge (and small) figures drawn in the sand. 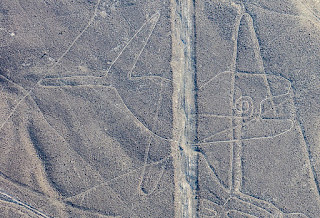 Since these lines weren't noticed till we had flight, making the drawings possible to see, many people believe aliens might be involved. 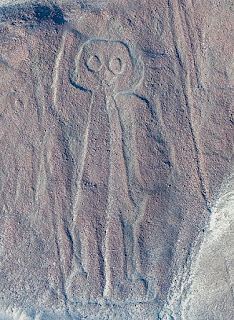 The Giant
(or dude in a flight suit indicating how high they managed to get? i.e. where oxygen is not so good)

But the lines are not smooth for landings and there is no reason for aliens to leave if they wanted to settle here. So there must be a more terrestrial explanation for the Nazca Lines. 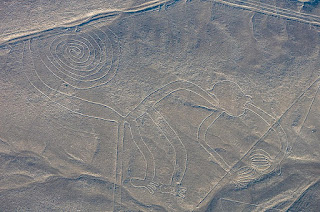 Given the lack of rain, simply removing the top soil to expose the rocks beneath was enough to create this ancient desert "art". This post has the breaking news on the Nazca lines plus the full scientific theory for evidence of flight in the Americas at some point (Amazon basin?). We do know that about 95% of the population of the Americas died when the Spanish introduced small pox by their arrival and cities in the Amazon were decimated and quickly overtaken by the forest... so alot more probably remains to be discovered in the Amazon and its surrounding areas. Such as a culture that increased its technological achievement to an unheard of level before disapearing into history again.

Giant drawings found near Nazca Lines in Peru desert
Archaeologists using drones have discovered 25 ancient geoglyphs thought to have been created by the Paracas culture in southern Peru.…

NY Times: More Than 140 Nazca Lines Are Discovered in Peruvian Desert A team of Japanese researchers combined on-the-ground archaeology with modern technology, including artificial intelligence, to identify the 2,000-year-old images.

A huge carving of a monkey with its tail twirled in a spiral; vast, geometric images of a condor and a hummingbird; an immense spider — the 2,000-year-old Nazca Lines in Peru have awed and mystified modern viewers since they were first seen from the air last century.
Now, 143 more images have been discovered, etched into a coastal desert plain about 250 miles southeast of Lima, the Peruvian capital. The Japanese researchers who found them combined on-the-ground work with the most modern of tools: satellite photography, three-dimensional imaging and, in one case, artificial intelligence.
The newly discovered carvings, or geoglyphs, depict human forms and a broad variety of animals, including camelids, a group of mammals that includes llamas and alpacas; cats; fish; and snakes, according to the research group from Yamagata University.
The shapes, some of which are believed to date from at least 100 B.C., were mainly identified in the western side of the area through fieldwork — picking through pottery remnants, stones and soil — and by analyzing high-resolution imagery, the university said in a statement last week. The largest are more than 300 feet long.

But one geoglyph was revealed as a result of a collaboration between the university research team and Watson, IBM’s artificial intelligence system.
When the university and IBM Japan analyzed data with software called Watson Machine Learning Community Edition, they identified various candidates for “biomorphic” shapes. The university said the researchers then chose one of them and, after conducting work on the ground in 2019, discovered a previously unknown, 16-foot figure of a human standing on two feet.
The Nazca Lines cover an area of about 173 square miles and are thought to have been scratched into the earth from 500 B.C. to A.D. 500. The shapes are best seen from the air, and many are impossible to discern from the ground.

The geoglyphs include humans, birds, camels, cats and other animals and were found between 2016 and 2018. They were identified through fieldwork and analysing high-resolution 3D data and aerial photography. Incredibly, one geoglyph in particular was solely discovered with AI technology, without the aid of humans, making it the first geoglyph discovered by an AI.


A look at how a plane could have developed in the Americas from a colony from Egypt;

Having a culture, or even city, with flying machines would certainly explain the desert art called the Nazca Lines that wasn't noticed till we too had flying machines of our own.
We know there was famine, disease and war in the old world. We also know there was an invasion on barbaric hordes in the ancient world, around 1177 BC, that destroyed the bronze age civilization (probably the result of displaced peoples from areas turned to desert or from floods and other natural disasters or wars etc.). Maybe people from more developed cultures (with pottery, books, boats, ideas etc) fled east, west and over the ocean looking for a more peaceful life? When Persians fled the Greeks into India there was a flowering of sculpture and a new Golden Age in India, Why not somewhere else? We do know there have been many inventions throughout history that were lost and in some cases rediscovered and in some not.

Wikipedia: The Saqqara Bird is a bird-shaped artifact made of sycamore wood, discovered during the 1898 excavation of the Pa-di-Imen tomb in Saqqara, Egypt. It has been dated to approximately 200 BCE, and is now housed in the Museum of Egyptian Antiquities in Cairo. The Saqqara Bird has a wingspan of 180 mm (7.1 in) and weighs 39.12 g (1.380 oz).[1] Its purpose is not understood because of a lack of period documentation.

History.com: The Saqqarra Bird: An Ancient Glider Or Child's Plaything With Accidental Aerodynamic Properties?
Extract from an article on Time.com: Cryptids: The Saqqara Bird

Mainstream researchers chalk the artifact up to nothing more than a carving of an actual bird that takes on some of the characteristics of a glider by coincidence, a child’s toy, a boomerang, or an early weather vane.
However, Dr. Khalil Messiha published a paper in 1991 called African Experimental Aeronautics: A 2,000-Year-Old Model Glider wherein he detailed the following:
“The wing is made of one piece of wood, and its span is exactly 18 cms. The part of the body is the thickest—8 millimeters. Then it tapers in thickness towards the tips. One can note also that there is a Dihedral angle which is slightly unequal on both sides due to slight distortion of the wood, caused by the passage of time.”
The “Dihedral angle” in this case refers to the same principle used in modern day aircraft to achieve lift. Here’s the diagram from Dr. Messiha’s paper.

Did an Ancient Egyptian colony in the Americas (or somewhere in that area) eventually attain flight?

On a developing WIkipedia page on this matter you get to hear the full story on this artifact: The Quimbaya artifacts are several dozen golden objects, found in Colombia, made by the Quimbaya civilization culture, dated around 1000 CE, a few of which (the so-called Quimbaya airplanes) are supposed by ancient astronauts theorists[who?] to represent modern airplanes, and therefore to be out-of-place artifacts. The whole of the figurines, measuring 2 to 3 inches (5 to 7.5 cm) each, are described in mainstream archaeology as depicting birds, lizards, amphibians and insects common in that region and period, some of them highly stylized, as in the Gold Museum, Bogotá.
In 1994, Germans Peter Belting and Conrad Lubbers created simplified radio-controlled scale models of these objects and showed that their models, which lack some convoluted features present in the real figurines, could fly.[1]
A 1500 year old pre-columbian artifact in the shape of a modern aircraft is tested for flight worthiness.
Full Show: CARS AND PLANES 44M 34S 2007 TV-PG CC Surprising archaeological finds lead historians to new conclusions about the underrated transportation technologies invented by ancient civilizations.

Top 10 Lost Technologies We Really Could Use Today

It is unclear how advanced technology got in the ancient world, all we can be sure of is that all libraries have been burnt, so all the records are lost and the civilizations that may have flowered into something out of a sci-fi movie, if even for only a few decades or a few hundred years - in our 10s of thousands of years of history - are long gone and even its remains have turned to dust. All that remains are these stone monuments and a few pieces of knowledge and artifacts that have survived through the millenniums of war, migrations and just getting rid of trash.

How can anyone say one culture couldn't have made a plane at some point before falling as all human civilizations or cities have fallen before it. There is still alot more to learn and discover.