Astrology depends on assigning predictable rotations of the planets and the sun in the backdrop of constellations from birth onwards. But ALL the Stars are in motion so the Earth has literally never been in the same space twice. In a million years even the constellations won't be the same, then how could Astrology be a science? Who will modify it and develop it? Psychics? The whole ridiculousness of this argument for astrology indicates it probably started as a more developed form of the primitive tendency to seek to forecast the future using stones, turtle shells etc. of which even the I Ching is a later development. The following is an extract on an article from CNN in which a scientist explains how the galaxy works. Notice that no planet or star has been in the same place twice so astrology can't be predictive in nature because the future would always be changing - since the stars are changing position - while the "science" it is based in doesn't, i.e. Astrology assumes for all time what the planets and constellations signify in a non-physical & non-scientific sense). Note: Astrology may also be the remnants of the star gazing knowledge of an ancient culture, mostly lost in a comet 12,800 years ago (Science Article), mixed in with more primitive/childish beliefs.

Extract from CNN (See same news on a Fox Affiliate): While astronomers are still learning how stars rotate around the center of the galaxy, ultimately everything in our galaxy is spinning around the black hole at its center. The stars closer to the center spin faster, while those in the outer regions spin more slowly. Our solar system is in one of the galaxy's spiral arms and the whole arm travels together around the galaxy, including the other stars in our "neighborhood," Christiansen said.

And the Milky Way galaxy itself is moving toward its large neighbor, the Andromeda galaxy. The two are on a collision course and will come together in about 4 billion years. While that sounds violent, galaxies are largely empty space and the stars won't collide with each other, Christiansen said.
So, relatively speaking, we're back to where we were between 200 to 250 million years ago. But based on our orbit of the Milky Way, which itself is moving and spiraling, we've never really back at the same absolute point in space because it's not possible.
"The simple idea I was trying to get across is, astronomy has certain timescales, and archaeology has them, and sometimes they match up. Isn't that cool?"

I actually made a slightly updated version to address some of the critiques of the original (updated the period of rotation of the Galaxy, took out plesiosaurs since THEY'RE NOT ACTUALLY DINOSAURS JESSIE WHAT KIND OF NERD ARE YOU ANYWAY?!) pic.twitter.com/LjLW6k5IGU
— Dr. Jessie Christiansen (@aussiastronomer) November 7, 2019

CNN(See same news on a Fox Affiliate): Earth was on the other side of the galaxy when dinosaurs reigned

She told her fellow stargazers that before they went extinct, dinosaurs wouldn't have even seen these stars in the sky because they didn't exist until millions of years after the extinction event. And she told them that when dinosaurs such as stegosaurs roamed the Earth, our entire solar neighborhood was on the opposite of the Milky Way galaxy that it is now.
Christiansen wasn't sharing new information, she said. But the fact caught everyone's attention because the movement of our solar system as it orbits the galaxy isn't something most people think about.
"You don't think about the sky changing," Christiansen said. "But the stars come and go, in step with our timescales."
She had been wanting to create an animation of this intriguing idea for a while and the reaction of the stargazers inspired her one night after her children went to bed. Using the classic Milky Way illustration, as if it were viewed from above, by Caltech senior scientist Robert Hurt, Christiansen built the animation using timed slides in PowerPoint. Then she recorded the screen to create a video she could share on Twitter.

Ah! @MorganMJohnsen's interview with me for @businessinsider about the Milky Way/dinosaur animation I made recently is live!https://www.businessinsider.com/video-nasa-scientist-dinosaurs-milky-way-2019-10 …

A NASA scientist's incredible animation shows how dinosaurs roamed the Earth on the other side of...

Dinosaurs lived on the other side of the galaxy. This animation combines paleontology and astronomy to show how that works.
businessinsider.com

Dr. Jessie Christiansen
✔@aussiastronomer
I actually made a slightly updated version to address some of the critiques of the original (updated the period of rotation of the Galaxy, took out plesiosaurs since THEY'RE NOT ACTUALLY DINOSAURS JESSIE WHAT KIND OF NERD ARE YOU ANYWAY?!) 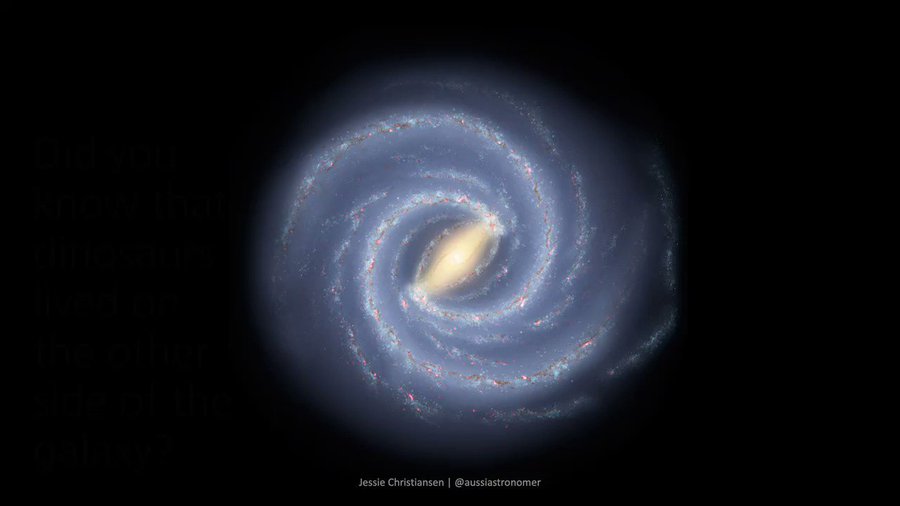 1,209 people are talking about this

She wanted to share the idea that even though astronomical timescales seem vastly different from our own, they actually match up quite well with archaeological timescales.The animation shows that it takes anywhere between 200 to 250 million years for the sun to orbit around the center of the galaxy, which is a grand spiral, skirting the dangerous middle that would be inhospitable to life.
Based on our current position in the galaxy and the timescales shared in the animation, we've essentially completed an orbit of it.
The last time our solar neighborhood was in this part of the galaxy, relatively speaking, the earliest of the dinosaurs began to appear on Earth during the Triassic period. After that, the Jurassic Period lasted for 55 million years, followed by the Cretaceous Period, which lasted until the dinosaurs went extinct 65 million years ago.
...