Background/Context:
1. Why Does The NRA Lie About Its Role In Preventing Legislation For Background Checks?
2. The NRA's Support For No Background Checks... Helps Terrorists, Domestic Abusers And Mass Shooters Alike!

The NRA likes to block background checks for guns and then pretend like it doesn't but everyone with half a brain thinks that's crazy and that there should be background checks (including approx. 69% of NRA members). So the question is, why would the NRA not want background checks when it can increase mass shootings and other such killings? The answer should be simple. Its because the NRA has basically become a terrorist organization (you could even see it in its now defunct TV station). Pushing ideas that cause the deaths of innocents for personal profit and or ideology is the very essence of terrorism.

The NRA is a Cult | March 7, 2018 Act 1 | Full Frontal on TBS
There are two great American cults that preach blind adherence to dogma, but only one is heavily armed.

As another debate about gun control unfolds in Washington D.C., Samantha Bee outlined the similarities between the National Rifle Association and the Church of Scientology during the latest episode of Full Frontal.
“Both of these cults are based on fanciful myths that when repeated enough, their otherwise intelligent followers start to believe,” Bee argued. “One says that 75 million years ago, an intergalactic warlord nuked billions of people in volcanoes. And then there’s the really crazy myth that guns have nothing to do with gun violence.”
“Both of these messianic cults push the narrative that only they can save the world,” she continued. “But if you join them, you can share in their power – they’ll make you a superhero, whether that means healing the sick with your mind or making a kill shot on a mass murder despite being unable to even hit the toilet bowl when you’re taking a leak.”
...
“Is Scientology safe?” Bee asked rhetorically. “Of course not. It’s bonkers. But it’s safer for the rest of us.”

Problem is, even thier cult like following isn't so stupid as yet to accept no background checks as a sane policy and thus the NRA has to lie - fear monger - about it (the "confiscation" con works very well on people uneducated in the Constitution or civil society and America's system of government). Recently, however, this NRA lie was exposed;


Recently Trump said there is strong support for background checks (probably looking at the polls on this); 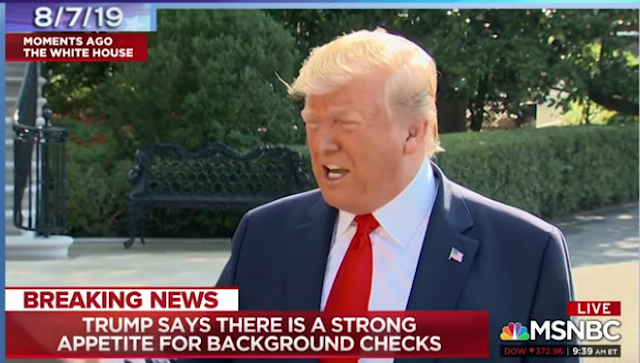 The NRA leader immediately lied to him and told him it was an unpopular move amougst his supporters; 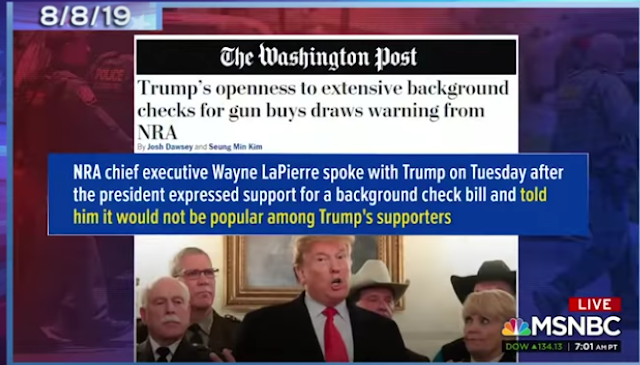 While this is going on we also know the leader of the NRA is making a boat load of money are are the other board members. 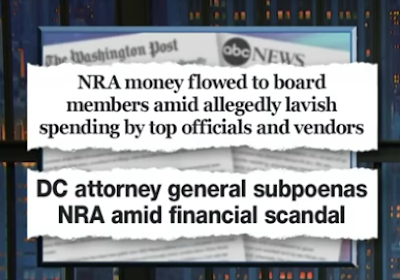 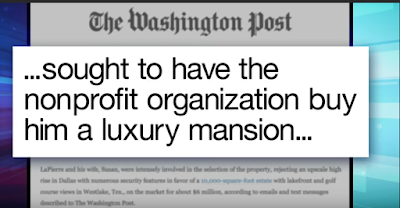 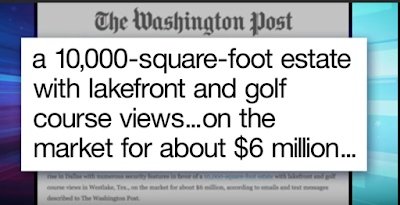 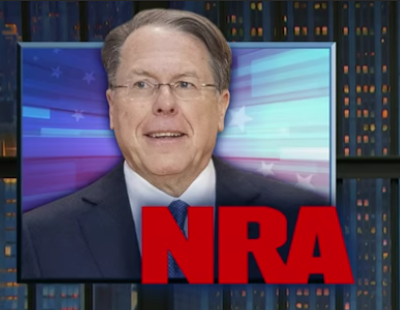 The NRA’s new warning for President Trump - The president's openness to extensive background checks may be gaining support on both sides of the aisle and with the majority of Americans there is one organization standing in the way. NBC’s Hans Nichols, Washington Post Opinion Writer Jonathan Capehart, and Moms Demand Action for Gun Sense in America Founder Shannon Watts join Stephanie Ruhle and Ali Velshi to discuss the NRA’s warning for President Trump.

CNN: Facts First: It is true that any company or shop that sells guns must put buyers through a background check. However, in the majority of states, private sellers -- those who occasionally sell guns they own and are not trying to turn a profit -- do not have to submit a buyer to the federal background check system.


Turns out Wayne LePiere gets alot of benefits for lying to the people for the NRA and its board members and big donors. Could terrorism be one of them?


This is something Republicans feel cognitive dissonance for... it shows where. & how, the cult breaks when faced with reality.

Of course, Trump has bought the whole spiel hook, line and sinker.

Trump retreats on background checks, says mental health is to blame for gun violence - “We already have a lot of background checks, ” President Trump said to reporters on Sunday, appearing to back away from calling for the “meaningful background checks” he said he wanted to implement earlier this month after a rash of deadly mass shootings in Dayton, Ohio, El Paso, Texas, and at the Gilroy Garlic Festival in California. New NBC News/WSJ polling shows that Americans favor expanded background checks by an overwhelming margin. Which side will win out — the majority, or the NRA?


Media outlets repeated a tired myth about the National Rifle Association’s power when their headlines credited the pro-gun organization’s “influence” as the reason President Donald Trump walked back his support for universal background checks. Media claimed the NRA saw “results” after Trump “caved” to the group, providing a simple counternarrative to reporting on recent massive turmoil, corruption scandals and infighting at the organization.
The reality is more complicated: By the time the president reportedly calledNRA CEO Wayne LaPierre to say he wouldn’t support expanded background checks, Trump had reportedly already lost interest in the gun safety measures as the mass shootings faded from the news cycle, according to sources within the administration.
While the NRA remains entwined within GOP gun politics, that fact shouldn’t be confused with the media conventional wisdom that sometimes falsely suggests the NRA can decide the outcomes of general elections at will.
Read more.