Background: Why Does The NRA Lie About Its Role In Preventing Legislation For Background Checks?

NRA has a pattern of supporting laws that are destructive and illogical in nature (as this post further illustrates). For example... the NRA/GOP supports the idea of terrorists being able to buy guns by not supporting a universal background check system;

Notes from screenshots:
i.e. here they argue that a determined terrorist can get a gun no matter what (without providing proof, as is normal to the GOP/fox) and thus making it tougher for a terrorist to get a gun is inappropriate!

Given NRA policy of supporting legislation that cuts background checks, clearly they want terrorists to roam free with guns in America... the question is why?;

Clearly laws to keep guns out of the hands of criminals is not a top priority of the NRA judging by the current laws after years of NRA lobbying amidst a growing epidemic of mass shootings;

GRANT STINCHFIELD (HOST): This is a very important point, that even the president didn’t address: Piers Morgan says make it harder for the Las Vegas shooter to get his firearms. There is no law, or proposed law today that would have stopped him from getting his firearms. He would have passed every background check, there was no evidence of mental illness, not one new law would have stopped him. So make it harder for him to get his firearms means make it harder for all of us to get our firearms. And that is simply unacceptable. It is our right in America to keep and bear arms. The left wants to get in the way of that right, and they do it under the guise of somehow being called common sense gun control. There was nothing common sense about where Piers Morgan was going there, I want to make that clear.

Related:
USA Today: Las Vegas shooter bought 33 guns in last 12 months
Previously:
NRATV host speculates without evidence that Las Vegas shooting was motivated by a desire to attack Trump supporters
NRATV host befuddled that man “who had money” and “seemed to be well-adjusted” went on Las Vegas gun rampage
NRATV host: Congress will “start with bump stocks and it ends with an all out assault on the Second Amendment”


NRA and Fox News, of course, often function as a unit in their propaganda;

FOX NEWS HAS A HARD TIME PROCESSING THE LAS VEGAS SHOOTING 10/3/2017 While most Fox News anchors struggle to push a narrative after the mass shooting in Las Vegas, Sean Hannity takes a preemptive stance against gun control.

Here the NRA pushes and passes a law that helps criminals get thier guns past State lines where criminals may be allowed to have guns! (An attempt to make domestic abuse issues worse?);

JUST BETWEEN US - AMERICA IS GUNNY AS F**K A House panel is set to approve a bill allowing good guys with guns to carry concealed weapons across state lines, even if they happen to have violent criminal pasts. 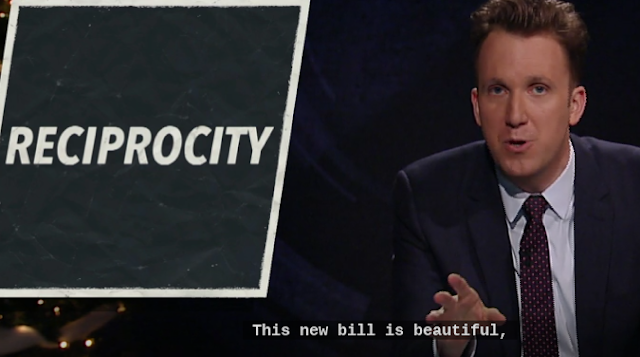 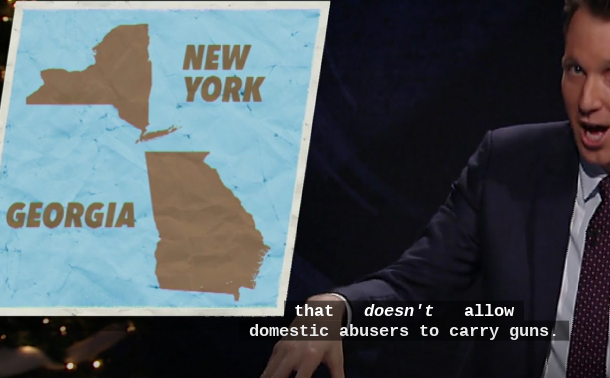 WASHINGTON — A key House panel passed legislation Wednesday to expand the rights of concealed carry permit holders — the National Rifle Association’s top legislative priority — as part of the first congressional action on gun legislation since this fall’s mass shootings. The House Judiciary Committee voted 19-11 in favor of the “Concealed Carry Reciprocity Act” Wednesday, after rejecting numerous attempts by Democrats to amend the bill.
...
The concealed carry bill would require each state to recognize concealed carry permits from every other state — as they would a driver’s license — regardless of different permitting standards. Residents of states that don't require permits to carry a concealed weapon would be able to carry their weapons in other states that allow concealed carry, as long as they abide by local laws.

Supporters of tighter gun restrictions for those with a history of domestic violence hope Florida’s school shooting will bolster the chance of passage for bills to make state laws more uniform and enforceable. Accused Florida gunman Nikolas Cruz had abused his ex-girlfriend, just as 54% of the mass shooters before him had committed domestic or family abuse, according to an analysis of mass shootings by the group Everytown for Gun Safety. The risk of death for abused partners is five times greater if guns are present, says Everytown policy and legal director Elizabeth Avore. The group has worked on domestic violence and gun legislation in about two dozen states since 2013. The NRA has promoted the idea of women buying guns to protect themselves and their children from domestic abusers and generally toned down its opposition to bills that restrict guns for those found guilty of domestic abuse. In a 2015 ad, spokeswoman Dana Loesch warned "every rapist, domestic abuser, violent criminal thug and every other monster who preys upon women" that their "life expectancy just got shorter" thanks to the millions of women buying guns.

The NRA, which did not respond to a request for comment, opposes what they call states' "anti-gun legislation." That includes an Oregon measure that would allow guns to be taken away from people found guilty of the misdemeanor crime of stalking because it "requires no finding that the individual is a credible threat, and furthermore, requires no use of force or even attempted use of force." Federal law prohibits spouses and certain boyfriends and girlfriends convicted of misdemeanor domestic violence crimes or under final domestic violence restraining orders from having guns. But without state laws that give state and local authorities the power to enforce the prohibitions, the federal requirements are toothless, critics say.