Given the cultural context I think this shooter may have been inspired by the El Paso terrorist shooting and other such shootings to take action but his anger took the form of vengeance for personal complaints and he was a leftist. All his targets were personal and not political, i.e. he wasn't targeting Republicans or any other political group, he was targeting people he didn't like from school. In other words, what we may have here is an example of untreated mental illness as he is known to have a hit list for boys and rape list for girls in his school...

(CNN)As a high school student, the gunman in the Dayton, Ohio, massacre had a "hit list" of classmates he wanted to kill or hurt, according to four former students who said they were told by school officials they were on the list.

Spencer Brickler said a counselor at Bellbrook High School told him that he and his sister were on Connor Betts' hit list. Brickler said he was riding on a school bus when he saw Betts getting escorted off by officers who were investigating the threats.

"He was kind of dark and depressive in high school," said Brickler, who recalled the incident occurring about nine years ago when he was a freshman. He said he had no idea what prompted Betts, then a sophomore, to put him or his sister on the list.

The information has taken on new significance now that Betts has been identified as the gunman who killed nine people early Sunday morning in a popular nightlife district in downtown Dayton, authorities said. Police officers on patrol nearby immediately responded and killed Betts less than a minute after he opened fire, authorities said.
...
Another former classmate, who asked not to be identified out of concerns for his privacy, also recalled being summoned to a school administrator's office and being told he was "number one" on the list of students Betts wanted to kill.


Said another way, lack of socialization and increasing anger caused a psychotic break. There were probably many signs of his mental breakdown way before the incident. A sharp decline in mental health services due to (I'm guessing) Republican led budget cuts to save money for their donors is probably a factor here. By comparison the El Paso shooter was a regular right wing psycho driven crazy by Fox News lies (a normal pattern) and was inspired by Trump (the Trump effect to traditional right wing terror) but he also saw Trump getting attacked in the media because of his support for hate and discrimination and seeks to protect him by trying to above him of guilt for his crimes. The following extracts show what a big problem the mental health crisis in America is and its relation to mass shootings where applicable.


LA Times: Op-Ed: Actually, there is a clear link between mass shootings and mental illness

According to our research, at least 59% of the 185 public mass shootings that took place in the United States from 1900 through 2017 were carried out by people who had either been diagnosed with a mental disorder or demonstrated signs of serious mental illness prior to the attack. (We define a mass public shooting as any incident in which four or more victims are killed with a gun within a 24-hour period at a public location in the absence of military conflict, collective violence or other criminal activity, such as robberies, drug deals or gang turf wars.)
Mother Jones found a similarly high rate of potential mental health problems among perpetrators of mass shootings — 61% — when the magazine examined 62 cases in 2012.
Both rates are considerably higher than those found in the general population — more than three times higher than the rate of mental illness found among American adults, and about 15 times higher than the rate of serious mental illness found among American adults.

It’s possible for mass public shootings to be both a gun problem and a mental health problem.

And yet this nuance often gets lost in mainstream news reports. In a story that largely suggested mass murderers are not “insane,” the New York Times cited research showing that, in fact, mass murderers are nearly 20 times more likely to have a “severe” mental illness than the general population.
According to our research, only one-third of the people who have committed mass shootings in the U.S. since 1900 had sought or received mental health care prior to their attacks, which suggests that most shooters did not seek or receive care they may have needed.
This treatment gap is underscored by evidence showing that the U.S. has higher rates of untreated serious mental illness than most other Western countries. Additional research shows that the gap is even larger for males, who have committed 99% of the country’s mass public shootings.
Although the link between mass shootings and mental illness has only recently gained widespread recognition, the correlation itself is longstanding. Indeed, we see it in some of the earliest such shootings in the U.S. Gilbert Twigg, who opened fire on a concert crowd in Winfield, Kan., in 1903, killing nine, had displayed signs of paranoia beforehand. Howard Unruh, who shot and killed 13 people in Camden, N.J., in 1949, was later diagnosed with paranoid schizophrenia. (Both were also Army veterans who had seen combat.)
Read more.

Cummings Institute On Effects Of Budget Cuts To Mental Health Services; Since states have reduced their health care funding by billions of dollars, many mental health care facilities in the United States are experiencing negative side effects. The budget cuts have caused an increase in emergency room visits for patients seeking mental health treatment with a total of 5.5 million seeking care in these facilities. It cost hospitals $38.5 billion to take care of these patients alone. This amount of spending could be significantly reduced by integrating mental health professionals within the ER and hospital settings.
To learn more about the effects of mental health care budget cuts, check out this infographic created by the Cummings Institute’s Doctorate in Behavioral Health degree program. Read more.

Late one night, while riding along with a police officer on patrol, the mayor of Fishers, Ind., asked the officer what kinds of calls most concerned him. He got an unexpected answer: mental health situations. They were occurring almost once a shift.
Mental illness isn’t readily visible in a place like Fishers, an affluent suburb of Indianapolis with just under 90,000 residents. “In our community,” Mayor Scott Fadness says, “there are a lot of people living in quiet despair and suffering from mental health issues, but they’re not being addressed in a systemic way.”
In the country as a whole, mental health situations are responsible for about 1 in 10 police calls. Many stem from undiagnosed conditions unknown to police and first responders. The consequences can be tragic. While about 3 percent of U.S. adults suffer from a severe mental illness, they make up a quarter to one-half of all fatal law enforcement encounters, according to the nonprofit Treatment Advocacy Center. Similarly, a recent internal review by the Los Angeles Police Department reported that 37 percent of police shootings last year involved suspects with documented signs of mental illness.
...
“When I became a police officer in 1977, we had health facilities,” Woody says. “Now, there’s no place to take them to.”
... 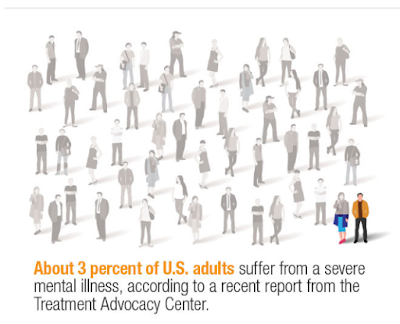 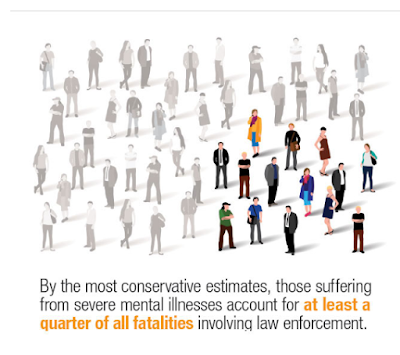 Calls for greater use of Assisted Outpatient Treatment

A nationwide survey of 2,406 senior law enforcement officials (75% who were officers longer than 20 years) documents police and sheriffs are being overwhelmed “dealing with the unintended consequences of a policy change that in effect removed the daily care of our nation’s severely mentally ill population from the medical community and placed it with the criminal justice system.” …This policy change has caused a spike in the frequency of arrests of severely mentally ill persons, prison and jail population and the homeless population…(and) has become a major consumer of law enforcement resources nationwide.”
The unpublished survey, Management of the Severely Mentally Ill and its Effects on Homeland Security was conducted by Michael C. Biasotti, VP, NYS Chiefs of Police at the Naval Postgraduate School and calls for implementation of Assisted Outpatient Treatment (AOT) laws as a way to lead people with severe untreated mental illness back into the mental health system and to force the system to accept responsibility for their care.
AOT allows courts–after extensive due process–to order a subset of severely mentally ill individuals–only those who have a past history of dangerous behavior, arrest, incarceration or multiple hospitalizations–to accept treatment as a condition of living in the community. The court order can also require the mental health system to deliver the treatment, monitor compliance, and evaluate people who fail to comply to see if they are becoming ‘danger to self or others’. Chief Besoot argues this “highly cost-effective policy… would assist in correcting the current situation, which is needlessly draining law enforcement resources nationwide.” He points out that most people with mental illness are not more violent than others, but there is a subgroup of the most seriously ill, who often refuse treatment, who are well-known to law enforcement and do offend repeatedly. (See 115 Law Enforcement Officers Killed by Mentally Ill)
According to the survey:

Note: This doesn't change the fact that not allowing nukes have resulting in no nuclear explosions and the fact that fighter jets and Apache helicopters haven't been made available to the people there haven't been incidents involving those war machines either. The frequency and deadliness of mass shooting have increased since the assault rifle ban wasn't renewed, though (meaning that tactic had some effect but probably wasn't enough). Mental health is an important issue but its not the only issue. The other issue is easily available guns to help with gun sales by the NRA (formerly an organization committed to safety and not terror).