A Collection of News Reports On The Newly Declassified UFO Videos


BBC - UFO spotted by US fighter jet pilots, new footage reveals - BBC News
UFO Spotted: The video was filmed in 2004 and investigated as part of the Advanced Aerospace Threat Identification Program. It's not clear if the object was ever identified. The New York Times reports that the US Department of Defense programme was shut down in 2012.


MSNBC: Pentagon Confirms They've Been Investigating UFOs, Releases Video | All In | MSNBC - The U.S. military has been investigating UFOs - and weirdly, no one seems to be too worked up about it. (Updated May 20, 2019)

CNN - Ex-UFO program chief: We may not be alone
Luis Elizondo, a former military intelligence official who ran the Pentagon's secret UFO unit, says it is his personal view given all the evidence he's seen that we may not be alone.

CNN - Former Navy pilot describes UFO encounterErin Burnett Out Front Former Navy pilot David Fravor, who caught the video of an unidentified flying object off the coast of San Diego in 2004, spoke with CNN's Jim Sciutto about the encounter.Source: CNN


Even Fox News covered it! (They normally don't cover science, they must be up to something?)...

Navy pilot recalls 'out of this world' encounter
Cmdr. David Fravor says in 2004 he had an unforgettable encounter with a strange aircraft he believes was defying the laws of physics - maybe a UFO. #Tucker

The Three UFO Videos Released By The Pentagon , So Far, Are;

1. Gimbal: The First Official UAP Footage from the USG for Public Release
Exclusive analysis brought to you by To The Stars Academy of Arts & Science. Gimbal is the first of three US military videos of unidentified aerial phenomenon (UAP) that has been through the official declassification review process of the United States government and has been approved for public release.

This footage, and all official USG footage you will see on TTS Academy’s community of interest (COI), comes with essential chain-of-custody documentation validating that it is received in its original and unaltered form and is authentic. The US Department of Defense uses this process in order to meticulously ensure that information and material retain their integrity without revealing sources and methods. This documentation is what sets this footage apart from anything else that has made its way to the public domain, by establishing its authenticity and thereby giving it enormous historical significance.


2. FLIR1: Official UAP Footage from the USG for Public Release
GO FAST is the third of three official USG videos selected for release after official review by multiple government organizations. While To The Stars Academy of Arts & Science was the first to obtain a copy, it should be available to any member of the press or public via the Freedom of Information Act.

This footage was captured by a U.S. Navy F/A-18 Super Hornet using the Raytheon ATFLIR Pod that was being operated by a highly trained aerial observer and weapons system operator whom the government has spent millions of dollars to train. Go Fast reveals a Navy encounter that occurred off the East Coast of the United States in 2015 and the object in view remains unidentified. Read further analysis of what is being observed in Go Fast by our team of experts including additional videos and reports on our community of interest: coi.tothestarsacademy.com. It is the mission of To The Stars Academy to support underfunded areas of research that could lead to a better understanding of scientific anomalies and breakthrough discoveries in technology.


3. Go Fast: Official USG Footage of UAP for Public Release
GO FAST is the third of three official USG videos selected for release after official review by multiple government organizations. While To The Stars Academy of Arts & Science was the first to obtain a copy, it should be available to any member of the press or public via the Freedom of Information Act.

This footage was captured by a U.S. Navy F/A-18 Super Hornet using the Raytheon ATFLIR Pod that was being operated by a highly trained aerial observer and weapons system operator whom the government has spent millions of dollars to train. Go Fast reveals a Navy encounter that occurred off the East Coast of the United States in 2015 and the object in view remains unidentified. Read further analysis of what is being observed in Go Fast by our team of experts including additional videos and reports on our community of interest: coi.tothestarsacademy.com. It is the mission of To The Stars Academy to support underfunded areas of research that could lead to a better understanding of scientific anomalies and breakthrough discoveries in technology.


Read analysis on the "To The Stars Academy" Website. 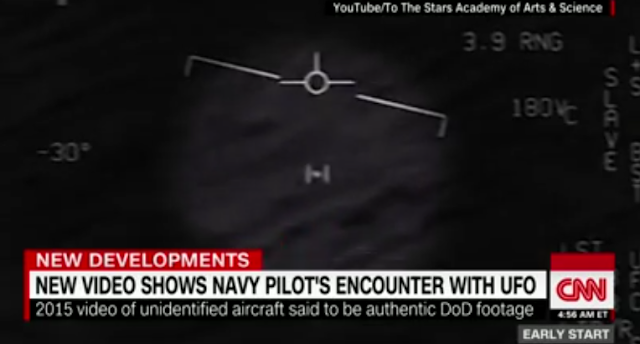 Washington Post - Navy: No release of UFO information to the general public expected


NY Mage: 5 Great Stories You Might Have Missed This Week

Extraterrestrials, take note: The U.S. Navy plans to set up an official reporting and investigative system that will monitor reports from its pilots about unidentified flying objects.
But while this "X-Files"-worthy operation sounds newsy, don't expect to hear details about it anytime soon. The Navy doesn't intend to make the data public, citing the privileged and classified information that these reports usually include, according to The Washington Post.
"Military aviation safety organizations always retain reporting of hazards to aviation as privileged information in order to preserve the free and honest prioritization and discussion of safety among aircrew," Joe Gradisher, a spokesman for the Office of the Deputy Chief of Naval Operations for Information Warfare, told The Washington Post. [7 Things Most Often Mistaken for UFOs]
In fact, beyond the announcement that the Navy is setting up this UFO-reporting procedure, "no release of information to the general public is expected," Gradisher said.
The upcoming procedure comes in the wake of other government-related UFO news. In late 2017, word came out that the Pentagon had a secret "UFO" office that spent $22 million over five years to study strange and threatening aeronautical events. Although funding for the venture, called the Advanced Aerospace Threat Identification Program (AATIP), ended in 2012, the program didn't entirely stop, according to those reports.
When news of AATIP became public in 2017, the Defense Department released two declassified videos, which showed pilots talking about a bizarre aircraft that appeared to accelerate quickly, even though it had no recognizable means of propulsion. These aircraft, which looked like blobs on the video, could allegedly drive thousands of feet in an instant.
By creating this new program, the Navy hopes to destigmatize any reporting associated with incidents that involve UFOs, which could, after all, be militarized aircraft from other parts of the world.
"There have been a number of reports of unauthorized and/or unidentified aircraft entering various military-controlled ranges and designated air space in recent years," the Navy told Politico, which broke the story. "For safety and security concerns, the Navy and the [U.S. Air Force] takes these reports very seriously and investigates each and every report."
The public may get a whiff of these incidents eventually, although the details may be scarce. For instance, perhaps unclassified parts, broad overviews or statistics about the number of sightings could be released, Luis Elizondo, an intelligence officer who ran AATIP before leaving the Pentagon, told The Washington Post.
"If it remains strictly within classified channels, then the 'right person' may not actually get the information," Elizondo said. "The right person doesn't necessarily mean a military leader. It can be a lawmaker. It can be a whole host of different individuals."
Read more.

Washington Post: UFOs exist and everyone needs to adjust to that fact

MSNBC: Why we need to adjust to the existence of UFOs - For the first time, the New York Times got experienced Navy pilots on record about unusual sights seen in the air. Professor Dan Drezner joins Morning Joe to discuss his latest column on UFOs and what that term means.

Space.com: UFOs Are Real, But Don't Assume They're Alien Spaceships
Aliens shouldn't be the default explanation for weird stuff in the sky.

History.com: UFO Investigations: Revealing Documents from HISTORY's 'Unidentified' Check back each week during the run of the show for new, behind-the-scenes documents from the Department of Defense and more.

CNN: The US Navy just confirmed these UFO videos are the real deal


(CNN)The US Navy has finally acknowledged footage purported to show UFOs hurtling through the air. And while officials said they don't know what the objects are, they're not indulging any hints either.
The objects seen in three clips of declassified military footage are "unidentified aerial phenomena," Navy spokesperson Joe Gradisher confirmed to CNN.
The clips, released between December 2017 and March 2018 by To The Stars Academy of Arts & Sciences, appear to show fast-moving, oblong objects captured by advanced infrared sensors.
In footage from 2004, sensors lock on a target as it flies before it accelerates out of the left side of the frame, too quickly for the sensors to relocate it.


NBC: Navy confirms videos did capture UFO sightings, but it calls them by another name - The U.S. Navy doesn't know exactly what the "unidentified aerial phenomena" seen in the videos are.


Three videos posted online that have been described as being related to UFO sightings do indeed include footage of “unidentified aerial phenomena,” a U.S. Navy spokesman confirmed.
But as for specifics, spokesman Joseph Gradisher said the Navy doesn't know exactly what the objects are.
"The three videos (one from 2004 and two from 2015) show incursions into our military training ranges by unidentified aerial phenomena," Gradisher told NBC News in an emailed statement.
"The Navy has characterized the observed phenomena as unidentified," he said.
To the Stars Academy of Arts and Sciences, a group dedicated to pursuing research into UFOs and extraterrestrial life that was co-founded by rocker Tom DeLonge of Blink 182, helped bring attention to the videos. The three videos were posted by TTSA and The New York Times in December 2017 and March 2018, NBC New York reported.
The website The Black Vault last week first reported the Navy's "unidentified aerial phenomena" designation and said the three videos are commonly known as "FLIR1," "Gimbal" and "GoFast."
The video called FLIR1 shows an oblong-shaped object, which accelerates out of view from sensors. The group says that video is from 2004 and the "2004 Nimitz incident."
Gradisher did not name the videos in his emails, but said the video from the 2004 sighting is from an aircraft from the carrier USS Nimitz.
In the video called Gimbal, a crew member is heard saying "look at that thing" about an object that they said appeared to be going against the wind. One says they believed it was a drone.
The video called Go Fast, which the group says is from 2015, shows an object that appears to be over water and crews are heard asking "what the f--- is that?" and "what is that, man?"

Note: - A discovery I made by accident (a UFO event following the same pattern described by a Navy pilot):

With The Release Of UFO/UAP Videos By The Pentagon... Can We Now Confirm That The UFOs Sighted At The Dome Of The Rock In Israel Are Real?