Besides similarities to talking points, ones audience dictates your ideological credentials. Both on talking points and most passionate listeners, Tucker Carlson proves himself to be a white supremacist, yet again and on a consistent basis, so there is no argument on what he is.

Tucker Carlson's 8 p.m. show on Fox News is the third most popular cable news show in the country, and he's quickly made use of his rising popularity to turn white nationalist narratives into prime-time stories. Carlson's brand has drawn a following of notable white supremacists, anti-Semites, and misogynists, making him a media figurehead among the “alt-right.”
His show has also grabbed the attention of the president. In August, President Donald Trump responded to a fearmongering Carlson segment on “white oppression” in South Africa, stating that he had ordered Secretary of State Mike Pompeo to investigate the issue.
Here is Carlson using language that echoes notable far-right figures:


The figures in this video:
Lana Lokteff: Lokteff runs the white supremacist internet media company Red Ice TV with her husband, Henrik Palmgren. Red Ice TV has hosted extremist Richard Spencer and featured Holocaust denier Kevin MacDonald discussing the “JQ” (Jewish Question). Lokteff and Palmgren took part in the 2017 white nationalist rally in Charlottesville, VA. The Daily Beast recently reported that “Red Ice regularly promotes hate against immigrants and Jews, riling up its listeners with claims that white people are ... facing extinction at hands of minority groups.”
Jared Taylor: Taylor is the head of the white nationalist American Renaissance group. The Pittsburgh Post-Gazette reports that Taylor “believes black people are genetically predisposed to lower IQs” than white people and that Black people “are sexually promiscuous because of hyperactive sex drives.” Taylor has appeared on talk shows to attack the legacy of Martin Luther King Jr.
Read the rest of the background of the videos Nazis.


Media Matters: Tucker Carlson is a hero on these white supremacist podcasts

According to a review by Media Matters, white supremacist podcasts revere Tucker Carlson and his nightly Fox News show Tucker Carlson Tonight.
White supremacist podcasts praise the Fox host for elevating white supremacist discourse into mainstream conservative media, talking about demographic change in America, and for his position on the Syrian civil war. Former Ku Klux Klan leader David Duke described Carlson as his “favorite commentator” and praised him for “naming the Jews” on his nightly show. White supremacist Mike “Enoch” Peinovich bragged that the “alt-right” is “putting things into the zeitgeist” that Carlson has “picked up.” Daily Stormer writer Eric Striker lauded Carlson for offering “real analysis [and] real solutions” for white nationalists and that “he single handed has risen right-wing discourse by mountains.” Duke associate Patrick Slattery said “on a lot of things, [Carlson]’s our only voice to a large extent.”
Many of the podcasts included in this review can be found on the white supremacist blog The Right Stuff (TRS), which currently aggregates 16 programs that feature vile anti-semitic, racist, and misogynistic content. TRS was founded by Peinovich, one of the white supremacists who helped organize the August 2017 “Unite the Right” rally in Charlottesville, VA, where counter-protester Heather Heyer was killed after a white supremacist charged a car into the crowd. In September, TRS had 1.02 million site visits.
Two of the most popular podcasts are The Daily Shoah -- a hateful wordplay on Comedy Central’s The Daily Show and the Hebrew word “Shoah,” meaning Holocaust -- and Fash the Nation, a fascist variation of CBS’s flagship Sunday news program Face the Nation. According to Newsweek, notorious neo-Nazi Andrew Anglin of the Daily Stormer wrote that “Tens of thousands—maybe even hundreds of thousands—of men have been brought into the [alt-right] movement through TRS and Mike’s work.” The Daily Shoah and Fash the Nation, as well as other podcasts published to TRS, have repeatedly praised Carlson as an ally of the “alt-right” who advocates for the interests of white people in America.
While many who appear on these shows use aliases to avoid real world consequences for their online hate, the identities of The Daily Shoah hosts are openly known: Peinovich, Jesse Craig Dunstan AKA “Sven”, and Alex McNabb.
Also including in this review are shows promoted by Duke and his associate Slattery, who runs a collection of websites pushing hateful content, including one called “Zio-Watch” that aggregates stories about Jews and Israel. These shows do not appear on TRS.
The Daily Shoah
Fash the Nation
Exodus Americanus
Third Rail
The David Duke Program
National Bugle Radio


Since the early days of his tenure as a Fox prime-time host, Tucker Carlson’s unabashed championing of white grievances earned him the accolades of neo-Nazis, who praised him as a “one man gas chamber” and complimented the way he “lampshad[ed] Jews on national television.” While Carlson claims to have nothing in common with neo-Nazis and white supremacists, he constantly echoes their talking points on his show and was very reluctant to condemn white supremacists following their deadly 2017 demonstration in Charlottesville, VA. In fact, Carlson’s racist roots can be traced back more than a decade.
Here’s a timeline of the public devolution of Tucker Carlson’s thinly veiled racism into full-throated white supremacy:


Nazis modeled their movement off American politics (particularly Southern politics)... could the following be a decoy to throw off would be investigators?

Tucker Carlson is aghast anyone would compare Trump to a Nazi...
(He previously compared the Obama administration to Nazis.)

First notice all the similarities between white supremacist above and Nazism in these links;

Now notice the similarities between Nazis and what conservatives are today: 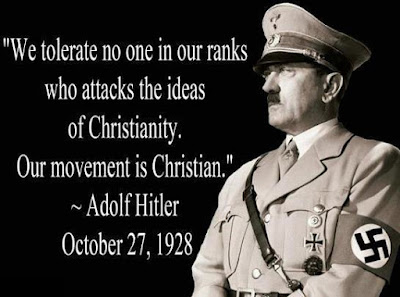