Related Context:
1. Nazism Has Been Repackaged as "Conservatism" Part 3 - The Pattern Of Unquestioned Obedience To Ones Leader Is The Same For The GOP & Trump's Followers As It Was For The Nazis & Hitler!
2. Height Of Hypocrisy 5: Roy Moore Hypocrisy & Deficit Hypocrisy Show GOP Stand For Nothing. Not Family Values. Not Fiscal Responsibility. Nothing. Except Maybe Pedophiles.

Its natural for the GOP to treat thier leaders like Tyrants/Dictators because that's how their party is structured and thus this is how they have behaving for a long time, i.e. like an internal Nazi terrorist organization that functions on lies above all else

GOP tax plan: Republicans praise Trump profusely Republican leaders told Donald Trump multiple times how great they think he is because of the passing of the GOP tax plan. Trump biographer Tim O’Brien joins Joy Reid on what he says is the president’s bottomless need for love. Duration: 7:01

Trumps plan seems to have been to lie till the Bill passes and then just admit he lied!

Donald Trump and the ‘just tell them’ approach to the truth

Does the president believe the nonsense or is he trying to deceive the public? Billy Bush, to whom Trump bragged about sexual assault during the infamous “Access Hollywood” recording, recently wrote a piece for the New York Times, which included an interesting anecdote.

In the days, weeks and months to follow, I was highly critical of the idea of a Trump presidency. The man who once told me – ironically, in another off-camera conversation – after I called him out for inflating his ratings: “People will just believe you. You just tell them and they believe you,” was, I thought, not a good choice to lead our country.

“People will just believe you. You just tell them and they believe you.”
It’s like “Field of Dreams” for propagandists incapable of shame. Instead of “if you build it, they will come,” we’re effectively witnessing “if you say it, people will accept it.”
Trump wants the Republican tax plan to be popular, so he declares it “very popular.” Does he know that the plan is unpopular? I suspect he simply doesn’t care.
As has been clear for quite some time, what matters to Donald J. Trump isn’t what’s true; it’s what he can get people to believe.

Fox's Kilmeade parrots Trump's false claim that GOP tax plan would "hurt him as a businessman"Tax plan could save Trump and his family over $1 billion
Related:
NBC News: Trump and his family could save more than $1 billion under House tax bill
Previously:
MSNBC hosts outline how GOP tax plan directly benefits Trump and the super rich
Study: Local TV news omits key details of Senate GOP's tax bill
4 ways right-wing media are shilling for tax reform (and why they're wrong)

White House finally admits Trump will benefit from tax bill President Donald Trump insisted for months that he wouldn't benefit from the tax bill, but his press secretary has finally admitted he will. Jason Johnson predicts a 2018 "boondoggle" for the GOP after the tax bill. He joins Joy Reid with David Cay Johnston. Duration: 8:31

Here is Trump insisting (lying) that he loses on this bill...

No one, of course, read the bill so it wasn't written by the politician OR for the people and is thus anti-constitutional in nature as its not for "we the people" but for "we the corporations" (with a push on fake economics to make it seem like its for the people so they can get away with their cams); - links

House Republicans Can't Answer One Basic Question About the Tax Bill They Just Signed Into Law Not even the legislation's co-author seems to know how many tax brackets it creates.

According to HuffPost's Matt Fuller, he had to interview 18 congressmen and women before he could find one, Rep. Chris Stewart (R-UT), who knew how many tax brackets the legislation creates. (For those scoring at home, the correct answer is seven: 10 percent, 12 percent, 22 percent, 24 percent, 32 percent, 35 percent and 37 percent.) These House members included Budget Committee Chairwoman Rep. Diane Black (R-TN) and Ways and Means Chairman Kevin Brady (R-TX), who co-authored the bill.
Still others, like Rep. Roger Williams (R-TX), Mike Gallagher (R-WI), Kevin Cramer (R-ND) and Chris Collins (R-NY), resorted to educated guessing. (Gallagher and Cramer reportedly came the closest, but each left out two of the seven brackets.)
The Republican Party passed the Tax Cuts and Jobs Act without holding a single public hearing. Before the bill was returned to the House later that morning, the Senate GOP passed the legislation sometime after midnight Wednesday.
Read the full report at HuffPost.

The GOP tax plan passed despite Trump’s ‘leadership,’ not because of it


The president played no meaningful role in shaping the plan’s core elements.
How is this “leadership”?

In fact, this may be an inconvenient detail, but what those singing Trump’s praises yesterday failed to note is that he didn’t even get what he requested from the legislation. The president asked for a 15% corporate rate, which was rejected. He drew a “red line” at a 20% corporate rate, which his own party ultimately ignored. He wanted to close the carried-interest loophole, only to see it survive. Of the seven new tax brackets, most of them aren’t even multiples of 5.

As for his role as “the marketer in chief,” let’s also not forget that the GOP tax plan is the least popular major piece of legislation to pass in three decades.

I don’t blame Trump for rejoicing – he’ll finally be able to hold a real bill-signing ceremony for something important – but he provided no meaningful leadership at all. This legislation signed despite him, not because of him.

Republican Politicians Got Away With Ridiculous Claims to Defend Their Tax Bill—and It's Trump's Fault How Trump paved the way for Republican lawmakers to be openly classist and racist.

Increasingly, it seems like Donald Trump has paved the way for Republicans to get away with statements that are nearly as outrageous as his own. Take the shameless claims the Republicans have used to push for the tax bill over the past two months. In case you're having trouble keeping up, here’s a brief rundown of a few times Republican officials made it perfectly clear they prioritize the wealthy over the poor:

In the good old days, politicians used to pretend they served their constituents. What happened?

Side Note: Everything with the GOP moves towards the creation of a "royalty" or rich people (a plutarchy, oligarchy ... with a Monarchy clearly visible over the horizon)...

Journalism professor: Anti-net neutrality FCC chairman Ajit Pai "wants to enable the oligopoly of cable and the telephone to control the net"

From the December 13 edition of MSNBC Live with Stephanie Ruhle:


... and straight up dictatorships...

Trump just threatened to shut down news outlets critical of him. That's what's happened in Turkey.Update: Trump doubles down, calls it "disgusting" that "the press is able to write whatever they want to write and people should look into it"

Yesterday, The Wall Street Journal reported that one of its journalists, Ayla Albayrak, had been convicted of “engaging in terrorist propaganda” by a Turkish court over Albayrak’s reporting in the Journal on a Kurdish separatist party banned in that nation. The move was condemned by the Journal’s editor-in-chief, Gerard Baker, and press freedom advocates.
Turkey’s increasingly authoritarian government has closed down more than 150 media outlets in recent years and imprisoned at least 200 journalists, according to the Stockholm Center for Freedom. But the move to prosecute and imprison a reporter for a Western media outlet for terrorism is extremely unusual. When Turkey arrests such reporters, the country can usually expect vigorous protests from the outlet’s home government.
But President Donald Trump did not take to Twitter this morning to condemn Turkey for its outrageous act. Instead, in a move that must have warmed Turkish president Recep Tayyip Erdogan’s heart, he offered up his own unrelated authoritarian condemnation of the American press.

✔@realDonaldTrump
With all of the Fake News coming out of NBC and the Networks, at what point is it appropriate to challenge their License? Bad for country!

Twitter Ads info and privacy
The president of the United States, in response to critical reporting about his administration, is calling for federal government reprisals against the outlet that produced that reporting. That the threat seems uninformeddoes not make it less chilling -- what matters is the president seems eager to use the power of government to restrict critical journalists.
This is what dictators do. First they criticize the media, and then they use the power of the government to crush them.

Fox Business ran defense for Scott Pruitt by baselessly attacking a CNN investigation CNN reported on the EPA chief helping a mining company. Fox Business Network didn't like that at all.

An extreme, conspiracy/infowars like, asskissing - "praise"- example: Lou Dobbs credits Trump presidency with increase in Christmas displays and holiday joy Dobbs: "I am seeing far more in the way of Christmas displays, Christmas lights ... and so much obvious joy"

From the December 15 edition of Fox Business' Lou Dobbs Tonight:
Kissing Trumps ass is practically Lou Dobbs profession now (as it is for any GOP or Fox personality when confronted with thier Supreme Leader;

Lou Dobbs: Trump is "possibly the strongest individual to serve in the Oval Office in my lifetime"
Lou Dobbs: "U.S. Marshals should follow" Obama and bring him back when he criticizes Trump while abroad
Fox's Lou Dobbs is outraged FBI nominee refuses to take a loyalty oath to Trump (As if the President is above the Constitution!)
Wow! Lou Dobbs expects loyalty oaths to the President (not the Constitution) and that a president can't be critizeds (like a Monarch/King) thus attacking the very foudnations of American (& global) democracy 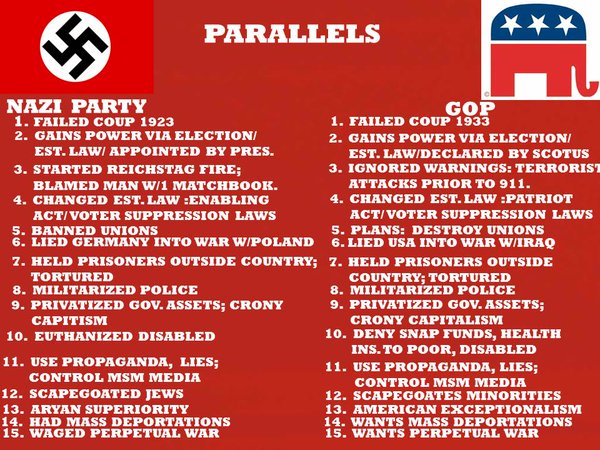