Tucker Demonstrates What Spinning Lies Into Truth Looks Like

Background:
1. Greg Gutfeld Nails It. The Right Wing Media Is Really Just A Bunch of Sheep.
2. Fox News Has The Highest Ratings As A Fake News Site... Even The President Listens to Them... Yet The Media Says Nothing.

This post documents some of the lies Tucker is spinning as truths;

A few comments on his spin disguised as truth;

Well, to some people allowing more people die due to lack of healthcare rather than covering everyone through a medicare type program and thus letting no people die to lack of access to healthcare, is something to freak out over. In fact it would bother any honorable human being only an evil Sith Lord could possibly be OK with no covering ALL the citizens with basic healthcare.


Raul Labrador's claim that no one dies from lack of health care access: Pants on Fire 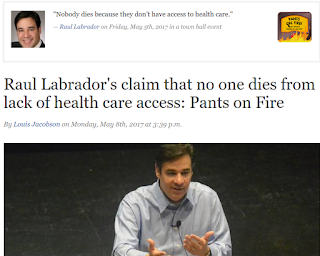 • A 2014 study published by the health policy publication Health Affairs looked at states that, at the time, had declined to expand Medicaid under the Affordable Care Act. It estimated that the 25 states studied would have collectively avoided between 7,000 and 17,000 deaths.
• A 2014 study in the Journal of Clinical Oncology found improved survival rates for young adults with cancer after securing insurance under the Affordable Care Act.
• A 2017 study in the journal Medical Care looked at a provision of the Affordable Care Act that allows young adults to be covered under a parent’s policy. The study found a decline in mortality among this population from diseases amenable to preventive treatment. (Mortality from trauma, such as car accidents, saw no decrease, as would be expected.)

Yeah, this confuses me to. It would make more sense to call them rich robber barons who are passing laws to destroy the American economy the way the Koch Brother destroyed Kansas, but it's like high school on the liberal side of corporate media while they go full traitor on the right (and have been since the Bush Administration did 9/11 and then lied to use taxpayers money and lives to make money in Iraq).


Report:Trump’s tax plan ‘would be Kansas on steroids’

Shortly after the 2012 elections, with Kansas Gov. Sam Brownback’s (R) radical economic experiment already underway, then-Senate Minority Leader Mitch McConnell (R-Ky.) said of his former colleague’s plan, “This is exactly the sort of thing we want to do here, in Washington, but can’t, at least for now.”
The Republican senator was referring, of course, to President Obama standing in the way of Congress imposing a Kansas-style experiment on the entire country.
That’s no longer a concern for GOP policymakers. On the contrary, with Donald Trump in the White House, McConnell’s dream of bringing Brownback’s Kansas experiment to the nation is now possible, and the administration’s ridiculous new tax outline suggests many Republican officials intend to follow Topeka’s lead.
With this in mind, the Kansas City Star’s editorial board offered some worthwhile advice this week.

Next week, Kansas lawmakers will once again try to figure out how to cover a massive shortfall in the state’s budget.
We hope President Donald Trump will be in the gallery, taking notes. That’s because the president’s tax plan, unveiled by the White House Wednesday, strongly resembles the disastrous tax plan passed in Kansas in 2012.
Trump wants to consolidate individual tax brackets and lower the top rate. He would eliminate some deductions and, most crucially, dramatically reduce taxes for business owners, including millions of people who own businesses but pay taxes on their profits as individuals.
Kansas Gov. Sam Brownback’s 2012 tax reform blueprint was quite similar, and we know why. The same worn-out supply-side “experts” helped write both proposals.

The difference is, we know how things worked out in Kansas. Brownback effectively destroyed the state’s finances, while failing to deliver the promised economic results in the form of jobs and growth. There’s no need to wonder how this agenda would work on a national scale because Kansas has already flunked the proof-of-concept test.
GOP officials in Kansas, following Brownback’s lead, tried a radical experiment, watched it fail, and then saw Trump and his friends pick up the same playbook. (I keep waiting for someone to tell the “it doesn’t work in practice, but maybe it’ll work in theory” joke.) 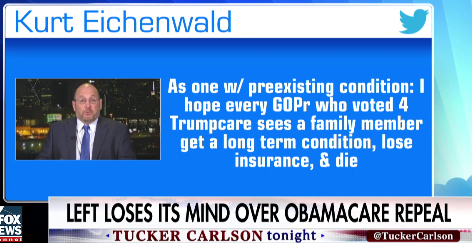 Well, they should be wanting GOP to die for 9/11 and the Iraq War lies but I guess some anger is better than none. In any case, now would be a good time to go after the GOP for thier 9/11 treason. 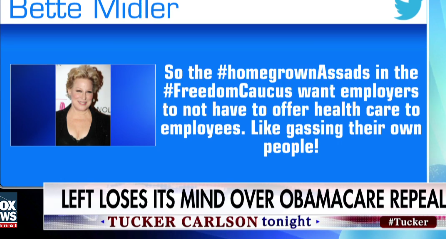 So very true! The GOP has become a homegrown terrorist movement. I documented this in these links;

A lie for no reason except to betray the truth to Citizen viewers;

A Collection Of Fox News Lies

Email ThisBlogThis!Share to TwitterShare to FacebookShare to Pinterest
Labels: Tucker