Trump's Betrayal Of The Sanders Republicans (Or Sanders Democrats, i.e. The Reason He Won The Elections): Trump's Shatters His Campaign Promises On Healthcare Proving Hes Not A Man Of His Word

This documents the lies and the fallout from those lies that the Trump "Administration" has been dealing with amidst other things. Of interesting to note here is how badly Trump turned his back on all his campaign promises on healthcare he said to get Sanders Democrats. Clearly whenever he says anything to Democrats hes lying.

FEELING THE SHAME: HOUSE REPUBLICANS FACE A HEALTH CARE BILL BACKLASH - After voting to repeal and replace the Affordable Care Act with their own health care bill, House Republicans receive blowback from their constituents.


THE ALL-MALE PANEL ON WOMEN'S HEALTH - Michelle Wolf explains why Senate Republicans need to include women on the panel responsible for crafting health care legislation.


F**KING UNBELIEVABLE: THE GOP SHOVES HEALTH CARE THROUGH THE HOUSE - Despite opposition from almost every major health organization, the GOP pushes an Affordable Care Act replacement bill through the House of Representatives.

Two big GOP lies on health care GOP Congressman Raul Labrador says nobody dies because they don't have health insurance and House Majority Whip Steve Scalise defends Trumpcare by saying 'nobody can be charged more than anybody else.'


Politifact: Raul Labrador's claim that no one dies from lack of health care access: Pants on Fire 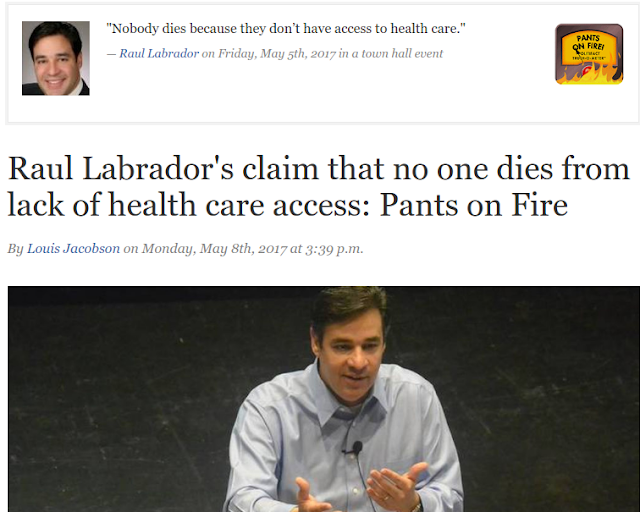 A literature review
We found at least seven academic papers that detected a link between securing health insurance and a decline in mortality. In general, these papers present a stronger consensus that having insurance saves lives.
• In 2002, a panel of more than a dozen medical specialists convened by the federally chartered Institute of Medicine estimated that 18,000 Americans had died in 2000 because they were uninsured. In January 2008, Stan Dorn, a senior research associate at the Urban Institute, published a paper that sought to update the IOM study with newer data. Replicating the study’s methodology, Dorn concluded that the figure should be increased to 22,000.
• A 2009 American Journal of Public Health study concluded that a lack of health insurance "is associated with as many as 44,789 deaths in the United States, more than those caused by kidney disease."
• Three studies looked at state-level expansions of Medicaid and in each case found "significant" improvements in mortality after such expansions of coverage. These include a 2012 New England Journal of Medicine study of New York, Maine, and Arizona by Harvard researchers, and a 2014 study of Massachusetts by researchers from Harvard and the Urban Institute.
• A 2014 study published by the health policy publication Health Affairs looked at states that, at the time, had declined to expand Medicaid under the Affordable Care Act. It estimated that the 25 states studied would have collectively avoided between 7,000 and 17,000 deaths.
• A 2014 study in the Journal of Clinical Oncology found improved survival rates for young adults with cancer after securing insurance under the Affordable Care Act.
• A 2017 study in the journal Medical Care looked at a provision of the Affordable Care Act that allows young adults to be covered under a parent’s policy. The study found a decline in mortality among this population from diseases amenable to preventive treatment. (Mortality from trauma, such as car accidents, saw no decrease, as would be expected.)


Republicans betray those who believed their health care promises

While most Republican rhetoric about health acre has been vague and unhelpful, at various points in recent months leading GOP officials have made a variety of specific promises. Today, with the passage of their regressive and unpopular American Health Care Act, those promises have been blithely cast aside.
1. Donald Trump vowed, “We’re going to have insurance for everybody…. Everybody’s going to be taken care of.” The Congressional Budget Office, scrutinizing an earlier version of the GOP legislation, projected that the ranks of the uninsured would grow by 14 million by next year, and that number would expand to 24 million by 2026. There’s no new CBO score, but by most estimates, the new total is expected to be even higher.
2. Trump promised, “I’m not going to cut Medicare or Medicaid.” The Republican slashes Medicaid by hundreds of billions of dollars.
3. Trump insisted the Republican plan would cover consumers with “much lower deductibles.” While the CBO report points to a range of cost changes, based largely on age, it also found millions of Americans would pay higher deductibles.
4. Trump vowed the GOP policy would offer “lower premiums” for consumers. The Republican plan would actually raise premiums considerably.
5. The House Republican leadership assured the public, in writing, “Americans should never be denied coverage or charged more because of a pre-existing condition.” The version of the GOP bill that passed today would gut protections for Americans with pre-existing conditions.
6. Trump “guaranteed” that pre-existing-conditions protections “are in the bill,” because he personally “mandated” it. The protections aren’t in the bill.
7. Paul Ryan vowed the Republican approach will make sure that “no one is left out in the cold” and “no one is worse off.” Tens of millions of Americans will be worse off if the GOP plan becomes law.
8. HHS Secretary Tom Price vowed that “nobody will be worse off financially” as a result of the Republican plan. That might be funnier now if it weren’t so sad.
9. Price said the GOP plan “will, in fact, cover more individuals than are currently covered.” This is, of course, the opposite of the truth, and even most Republicans have backed away from this kind of rhetoric.
10. Trump said his approach to health care would “end [the] opioid epidemic in America” and “dramatically expand access to treatment slots.” The opposite appears to be true.
If you’re one of those Americans who took the Republican promises seriously, and were counting on GOP leaders to keep their word, I’m afraid I have some bad news for you.
It’s plainly obvious that Republicans have betrayed those who believed their health care promises. To date, GOP leaders – including Trump and Ryan – haven’t even tried to defend these broken commitments.


Trump's empty promises on health care Chris Hayes spars with Republican Rep. Michael Burgess about what Trump and the GOP promised -- which was a lot! -- versus what the House bill delivers.

The GOP has a pre-existing condition Republicans made health care promises that are impossible to keep. And now they're coming back to haunt them.

GOP Rep. defends huge cuts to Medicaid The GOP health care bill cuts Medicaid by $880 billion, or 25% - but Rep. Bill Johnson insists 'we aren't going to pull the rug out' from people.

Kennedy on Medicaid cuts: 'it’s not who we are' There are big cuts to Medicaid in the GOP health care bill, despite President Trump's promises to the contrary. Duration: 4:37

Gov. Beshear: GOP is playing 'word games' with ACA The Democratic Governor of Kentucky tells Chris Hayes: 'This is life and death for millions of Americans and all they want to do is play word games.' Duration: 3:08

Trump undercuts his travel ban argument It was supposed to be needed immediately to keep the country safe. So why is the White House delaying a revised version for PR? Duration: 2:14

Trump lashes out at judges - again The president says comments in court over his travel ban are 'disgraceful,' and says the ban would only be blocked due to politics. Duration: 6:44

GOP uses health care as means to tax cuts for the wealthy Jonathan Gruber, professor of economics at M.I.T. and an architect of the Affordable Care Act, talks with Rachel Maddow about how Republicans are using cuts in Medicaid as a stepping stone to make their upcoming tax plan easier to pass. Duration: 5:17