The Case To Impeach Trump JUST For Being Crazy

Background:
1. Trump's Betrayal Of The Sanders Republicans (Or Sanders Democrats, i.e. The Reason He Won The Elections): Trump's Shatters His Campaign Promises On Healthcare Proving Hes Not A Man Of His Word
2. The Case For Impeaching Trump For Foreign Financial Ties, Nepotism & Making Money Off The Presidency Using A "Trust" In His Name
3. The Fall Of America 2: Explaining Trump Asking Comey For A Loyalty Oath As Trump's Inner African Dictator (GOP's "Loyalty Oaths" & Treasonous Tendencies Are Preventing Them From Impeaching Trump)

Here is a collection of information showing that there really is a case to impeach Trump JUST for being crazy...

'House of Cards' stars: Trump crazier than show Neve Campbell and Michael Kelly from "House of Cards" tell CNN why the current political climate is more outrageous than what happens on their show.

George Will: Trump has a 'dangerous disability' Conservative Pulitzer Prize-winning columnist George F. Will joins Lawrence O'Donnell to discuss Donald Trump's "dangerous" inability "to think and speak clearly" and what Americans must do about it. Duration: 6:56

Former FBI Director James Comey reportedly told associates in March that President Trump was "crazy" for suggesting former President Obama had wiretapped him. Comey also called the president “outside the realm of normal,” according to a report from The New York Times on Wednesday. The Times said that, in return, Trump was furious when Comey publicly refused to back his claims that he was wiretapped during the 2016 campaign before the House Intelligence Committee in March.

Comey said during the March 20 hearing that the FBI had “no information” supporting Trump’s allegations. The Times report highlights lingering tensions between the president and Comey that led Trump to decide to fire the FBI chief on Tuesday, a decision that stunned Washington. Trump reportedly became increasingly angered by Comey’s remarks in the weeks after the March hearing and began discussing his possible firing. The president told aides there was “something wrong with” Comey Sunday, two days before his ultimate ouster.

News: More Crazy Than Nixon': Critics Shocked by Trump Admission on Comey "Isn't it inappropriate for a president to ask the FBI director directly if he is under investigation?": While it's hard to keep up with the shifting reports of how the decision to fire FBI Director James Comey came about, President Donald Trump on Thursday admitted to directly asking the former head of law enforcement if he was under investigation—a move many said presented a shocking conflict of interest.

The Root: Trump’s Latest Claim Shows Just How Crazy He Really Is

Alex Jones claims to be telling the truth on air but in court tells the truth that he is just a performance artist (& Trump believes his crap! How dangerously crazy is that?)

Turn out Alex Jones has to go to court for a custody battle (as if anyone should give any child to this psycho);

Problem (or Revelation) is that Alex Jones really has no choice but to tell the truth in court... thus we now know the truth about Alex Jones... HE'S LYING... HE IS JUST A PERFORMANCE ARTIST... THAT MEANS ALL HIS "NEWS" STORIES ARE BULLSH*T! As shown on CNN; ALEX JONES IS A PERFORMANCE ARTIST NOT A TRUTH TELLER. HE'S ACTING!!! 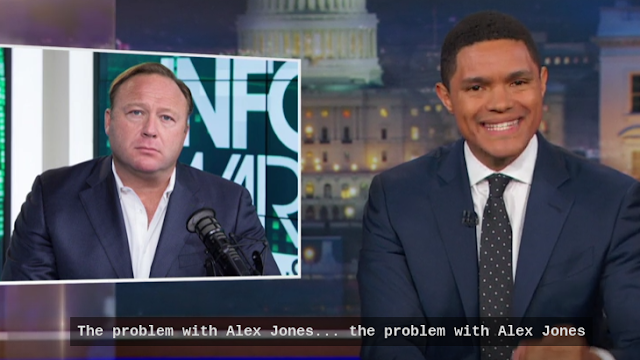 That's true. His fans think he's telling the truth and they are freaking out. His news stories and talking points (in total) suggest he is a paranoid schizophrenic who can't put two and two together to save his life.

Unfortunately he misses the mark with this one. Not acknowledging scientific facts when it comes to 9/11 actually makes Democrats look guilty of involvement or at least stupid. Many conservative commentators take this fact for granted when working for or against their idea of making America better. Even if it wasn't super easy to debunk a the Government appointed experts (or the Government explanation), there are still over 2800 architects and engineers one has to ignore. Liberals use facts except when it comes to big and important things... then they can be just as stupid as the right (or at least useless).

This is an example of bullshit that works because the media lacks credibility. This one Trevor Noah got right. 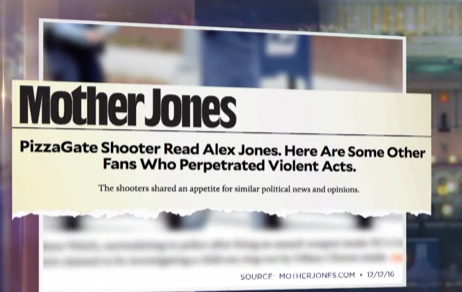 True. Later Alex Jones denied it like he knew his performance art had created violence and he was covering up...


Given that Alex Jones is a lying performance artist and Trump is listening to him like he is the real deal (even saying he has a great reputation!), clearly lacks the mental ability to distinguish crazy from sane to such a point that we can't help but classify Trump as crazy... 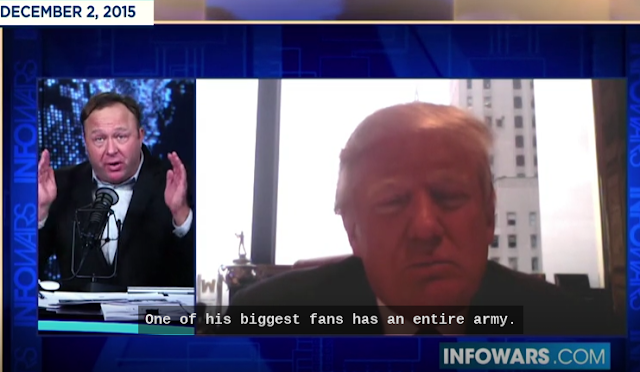 This co-ordination between Trumps talking points and Alex Jones talking points continues to this day with Alex Jones defending Trump with nonsensical theories like he's Mel Gibson in Conspiracy Theory (which is probably where Alex Jones got his character for his traitorous performance art from):

Alex Jones Says Trump Firing Comey Is About Stopping The Deep State "Fake Russia Narrative" Jones: "It’s Also The Fact That Comey Is Seen As Weak And As Very, Very Manipulative But In A Candy Ass Way"


Here is where Trump pulls his con on the 9/11 truthers suggesting he needs to "run things" for while... as if he doesn't have the army listening to him already. Trump could begin investigation 9/11 today but he doesn't do so because he is busy passing bills to destroy the country and make money off of it while violating the Constitution he swore an oath to. Clearly Trump si lying here...

By "a little but of time to run things" Trump clearly meant he was going to tie America and the Constitution onto a table a torture it and tear it apart, like SAW

I only say this because of the stuff he has done...


Trump administration weak on basic competence Rachel Maddow points out how Donald Trump has hired people who are ill-suited for the roles in which they're meant to serve, like contraception skeptic Teresa Manning in charge of contraception programs, or anti-abortion activist Charmaine Yoest bringing alternative facts to HHS. Duration: 9:43

Matthews: Trump has 'trashed everyone' Michael Steele and Eugene Robinson join Chris Matthews to discuss Lester Holt’s exclusive interview with President Trump where he comments on his reasoning for firing James Comey.