The Fall Of The American Economy: Trump Makes War On The Economy By Taking Treasonous Economic Policies Designed To Destroy The Economy From Koch Brother Think-Tanks

Background:
1. The GOP Is Pushing The Same Failed Economic Policies That Destroyed The Economy Under Jeb Bush's Brother
2. Trump's "Alternative Facts" Are The Ultimate Result Of Fox News Talking Points
3. The Fall Of America 2: Explaining Trump Asking Comey For A Loyalty Oath As Trump's Inner African Dictator (GOP's "Loyalty Oaths" & Treasonous Tendencies Are Preventing Them From Impeaching Trump)
4. The Last Time The GOP Passed A SPENDING Bill... They CREATED AND INCLUDED A LAW That Could Destroy The Economy
5. An Introduction To, And A Basic Overview Of, The Fake Economics Republicans Push

Trump has clearly decided to help the Koch Brothers destroy the economy, the country and the Constitution. So many traitors, so few Americans.

What Trump has done is push a standard GOP economic policy of gutting everything that helps give a hand up to American communities so America can grow and instead increase military spending for a military that already gets more money than a bunch of top countries combined; 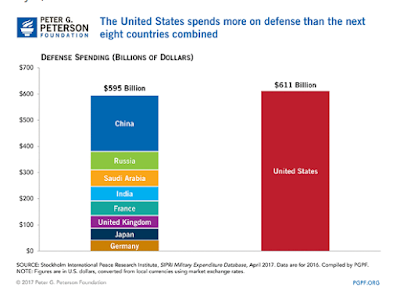 (given that the biggest threat to our security is us and our 9/11 covering asses, that is quite alot).

In other words, rather an America that grows with technology and respect (thus providing a humane guiding light to the world) we have an America that pursues empire and terrorism while calling others terrorists (i.e. Trump is just, apparently, enbracing the GOP's already established treasonous economic models to destroy the country to hide their sins).

No matter how the liars of the GOP and Fox News try and sell the GOP's economic bills, reality is that Trump's tax plan (the most recent economic bill) would destroy the economy like the Koch Brother Libertarians destroyed the Kansas economy... understandably since the plan came straight out of the Koch Brothers Kill America Labs (GOP States have always been moocher States - as they use fake economics probably for nefarious reasons - but destroying a State took some effort... I guess Koch Brothers got their wish of drowning the Constitutionally created Government - and thus the country - in a bathtub)

Maddow Blog: Trump’s tax plan ‘would be Kansas on steroids’


Shortly after the 2012 elections, with Kansas Gov. Sam Brownback’s (R) radical economic experiment already underway, then-Senate Minority Leader Mitch McConnell (R-Ky.) said of his former colleague’s plan, “This is exactly the sort of thing we want to do here, in Washington, but can’t, at least for now.”
The Republican senator was referring, of course, to President Obama standing in the way of Congress imposing a Kansas-style experiment on the entire country.
That’s no longer a concern for GOP policymakers. On the contrary, with Donald Trump in the White House, McConnell’s dream of bringing Brownback’s Kansas experiment to the nation is now possible, and the administration’s ridiculous new tax outline suggests many Republican officials intend to follow Topeka’s lead.
With this in mind, the Kansas City Star’s editorial board offered some worthwhile advice this week.

Next week, Kansas lawmakers will once again try to figure out how to cover a massive shortfall in the state’s budget.
We hope President Donald Trump will be in the gallery, taking notes. That’s because the president’s tax plan, unveiled by the White House Wednesday, strongly resembles the disastrous tax plan passed in Kansas in 2012.
Trump wants to consolidate individual tax brackets and lower the top rate. He would eliminate some deductions and, most crucially, dramatically reduce taxes for business owners, including millions of people who own businesses but pay taxes on their profits as individuals.
Kansas Gov. Sam Brownback’s 2012 tax reform blueprint was quite similar, and we know why. The same worn-out supply-side “experts” helped write both proposals.

The difference is, we know how things worked out in Kansas. Brownback effectively destroyed the state’s finances, while failing to deliver the promised economic results in the form of jobs and growth. There’s no need to wonder how this agenda would work on a national scale because Kansas has already flunked the proof-of-concept test.
GOP officials in Kansas, following Brownback’s lead, tried a radical experiment, watched it fail, and then saw Trump and his friends pick up the same playbook. (I keep waiting for someone to tell the “it doesn’t work in practice, but maybe it’ll work in theory” joke.)

Revenue + Expenditure = A State ... the example of Kansas;

PBS - The Warning: Long before the economic meltdown, one woman tried to warn about the threat to the financial system...

The con the GOP pulls to push fake economics to destroy the economy so people will be too caught up in economic problems to indict them for doing and/or covering up 9/11;


The debt problem isn't what we are being led to believe it is from the right (and this has been going on for years!). The whole argument on the right arose from false mathematics in a bad economic study. Unfortunately, the right no longer cares about science of math (a branch of science), now they scream about the debt, without knowing or seeking to know anything, as just a matter of "principle".
News Report: Is the evidence for austerity based on an Excel spreadsheet error?
Reinhart and Rogoff appear to have made an error with one of their Excel spreadsheet formulas. By typing AVERAGE(L30:L44) at one point instead of AVERAGE(L30:L49), they left out Belgium, a key counterexample:
Answer = Yes!


The Trump bait and switch He promised working people he'd fight for them. But his actions reveal him to be just another help-the-rich Republican. Duration: 7:58

Trump admin: Tax cuts for the wealthy will pay for themselves

As things stand, it’s hard to say with confidence whether Donald Trump’s White House intends to pursue a sweeping tax reform package, which would overhaul the entire federal system, or a more modest package of tax cuts. The former is a very heavy lift, while the latter is difficult to pay for.
At least, that is, in theory. In practice, the Washington Post reports that the Trump administration isn’t too worried about finding the money to pay for tax cuts, because it believes the Tax Fairy will come along and make the costs magically disappear.

The Trump administration plans to rely on controversial assumptions about economic growth to offset steep cuts to business and individual tax rates, a chief architect of the plan said Thursday.
Treasury Secretary Steven Mnuchin said the economic growth that would result from the proposed tax cuts would be so extreme – close to $2 trillion over 10 years – that it would come close to recouping all of the lost revenue from the dramatic rate reductions. Some other new revenue would come from eliminating certain tax breaks, although he would not specify which ones.

Mnuchin declared yesterday, “The plan will pay for itself with growth.”
This, alas, is not a new concept. For decades, conservative policymakers have said tax breaks, especially those targeted at the wealthiest Americans, supercharge the economy to such an extent that increased growth leads to increased revenue. Ergo, there’s no need to try to offset the costs of tax cuts because the cuts necessarily pay for themselves.
Republicans have even come up with some nice sounding jargon, “dynamic scoring,” to help rationalize the fiscal strategy.
The problem, of course, is that this has not worked, and does not work, in practice.
Sure, tax policy has an impact on the economy, but every time Republicans have said tax cuts will pay for themselves through increased, growth-based revenue, the money hasn’t materialized. For a contemporary refresher, consider what happened in Kansas when Gov. Sam Brownback (R) said his tax cuts would pay for themselves.
Even House Speaker Paul Ryan (R-Wis.) has said he disagrees with the idea. The person Republicans chose to lead the Congressional Budget Office doesn’t believe it, either.

John Boehner reveals the Republican plan to destroy government and create a super-race of right-wing Titans. (3:01):


The Daily Show
Get More: Daily Show Full Episodes,The Daily Show on Facebook,Daily Show Video Archive
Note: Left out unfunded Bush wars + the huge reduction in taxes for the rich which is the single largest contributor towards the debt i.e. if you don't remove the causes of a problem the problem will persist. Bush admits to this below.
Reminder: Republican rule put the country on the brink on economic collapse (remember 2008-09?). Even George Bush said that he didn't understand that his ideological position of no taxes etc. turned out to be bad for the economy (hehe)
Past GOP hypocrisy on this issue showing a pattern of behavior:

Miscellaneous article: 10 Things the GOP Doesn't Want You to Know About the Debt