The Case To Impeach The Trump Administration For Obstruction Of Justice

Background:
1. The Case To Impeach Trump JUST For Being Crazy
2. The Case For Impeaching Trump For Foreign Financial Ties, Nepotism & Making Money Off The Presidency Using A "Trust" In His Name
3. Trump's "Alternative Facts" Part 2: The Fall Of America
4. The Fall Of America 2: Explaining Trump Asking Comey For A Loyalty Oath As Trump's Inner African Dictator (GOP's "Loyalty Oaths" & Treasonous Tendencies Are Preventing Them From Impeaching Trump)
5. The Comey Firing Circus Begins - An Initial Overview Of Trumps FBI Scandal

What this post will show is that the case for Obstruction Of Justice is actually very strong. In fact, NOT seeking a special prosecutor under these circumstances IS Obstruction of Justice (as the DOJ wants to do... as they have probably sworn a loyalty oath to Trump... our entire government has been compromised!). In any case, Trump has changed his position on this issue so many times that its pretty clear that hes lying... as if the case wasn't strong enough. 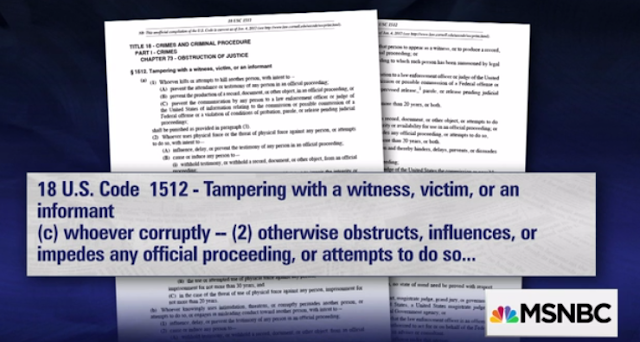 Whats Going On: Basically, in the middle of an intense investigation and questions about that investigation, Trump fires the guy investigating him (Comey) saying that he is doing it because Comey botched the investigation on Clinton who Trump said he would put in jail , till winning the election brought him some sanity and he recanted considering he had no stickable charges (i.e. the lie Trump came up with wasn't even a good one and given his history of constant lying since he became President he would have needed a very good explanation).

Clearly, Comey sped up the investigation and got fired (the case for obstruction of justice is solid)...

Lawrence: Subpoenas are nuclear weapons of political life Michael Flynn may have just had the worst day of his life, as the Senate Intel Committee issued a subpoena for his records relevant to the Russia probe. Plus, a new report Comey called Trump "crazy." John Heilemann, Joy Reid & Max Boot join Lawrence O'Donnell. Duration: 15:50 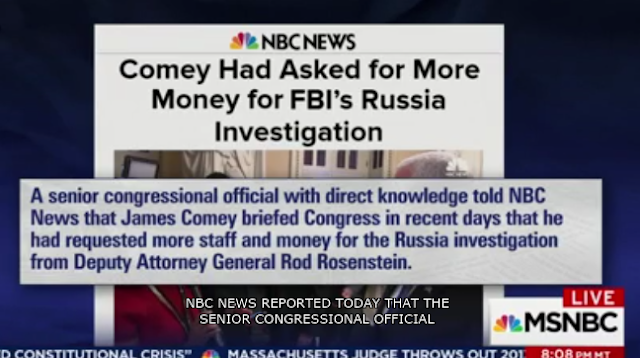 ***Comey sped up the investigation and got fired. Trump is clearly guilty (or at least members of his Administration are, which is the same thing).


The right is arguing that the Democrats didn't like Comey and now are making a martyr out him (using standardized alternative facts)...

Kellyanne Conway: Democrats trashed Comey then made him a martyr


This completely misses the point about being able to have unintended, independent investigations in this nation which keeps us from being a dictatorship...

Clearly, what we have here is obstruction of justice.

As the controversy surrounding Donald Trump's firing of FBI Director James Comey intensifies, one of the key questions is whether the president obstructed justice by firing the person overseeing the investigation into the Russia scandal. Trump's allies have gone to great lengths this week to argue that the firing and the investigation have nothing to do with one another.
The president, however, has now admitted that those defenses are wrong. In an interview with NBC News' Lester Holt yesterday, Trump admitted he was motivated by concerns about the Russia scandal when he decided to oust Comey from his FBI post.

"[W]hen I decided to just do it [fire Comey], I said to myself, I said you know, this Russia thing with Trump and Russia is a made up story."

About the same time as the interview, Trump's spokesperson also told reporters that by firing Comey, the White House has "taken steps" to end the investigation into the Russia scandal.
Democrats don't need to make the case that Trump obstructed justice; Trump and his team are doing it for them.
Perhaps you've seen a crime drama in which the smart detective sits down with a suspect and tries to cleverly get the accused to confess to the crime. In this case, however, the task is made far easier by the fact that the president has dropped the pretense of innocence. Trump is effectively admitting he's guilty.
And as Rachel noted on the show last night, the only appropriate remedy for a president who's obstructed justice is impeachment.


Trump seems to have basically been angry at Comey for not lying for him (which has alot of connotations);

Enough Was Enough’: How Festering Anger at Comey Ended in His Firing

WASHINGTON — By the end, neither of them thought much of the other. After President Trump accused his predecessor in March of wiretapping him, James B. Comey, the F.B.I. director, was flabbergasted. The president, Mr. Comey told associates, was “outside the realm of normal,” even “crazy.” For his part, Mr. Trump fumed when Mr. Comey publicly dismissed the sensational wiretapping claim. In the weeks that followed, he grew angrier and began talking about firing Mr. Comey. After stewing last weekend while watching Sunday talk shows at his New Jersey golf resort, Mr. Trump decided it was time. There was “something wrong with” Mr. Comey, he told aides.

Proofs of Obstruction of justice and thus we need a special prosecutor for democracy to survive;

Trump behavior toward Comey likely making his lawyers unhappy Bob Bauer, White House Counsel to President Obama, talks with Rachel Maddow about the legal issues at play in Donald Trump's firing of James Comey and his stated reasons for doing so with regard to the Trump-Russia investigation. Duration: 3:44

WH on Russia probe after Comey firing: It's time to move on When asked whether FBI Director Comey's firing will impact the Russia investigation, White House Deputy Press Secretary Sarah Huckabee Sanders answered "When are they gonna let that go?" Ken Dilanian and Ari Melber join Lawrence O'Donnell to weigh in. Duration: 4:54

Joe on Lester Holt’s exclusive interview with Trump Joe Scarborough talks about the effects of President Trump speaking with FBI Director James Comey to get an update on his criminal investigation. Duration: 6:42

(CNN)President Donald Trump issued a thinly veiled threat Friday to fired FBI Director James Comey, apparently suggesting there are possibly recorded conversations between the two men that could be leaked to counter the former FBI director if necessary.
"James Comey better hope that there are no 'tapes' of our conversations before he starts leaking to the press," Trump tweeted.
The remark is an extraordinary development in the ongoing feud between the President and the agencies investigating alleged ties between his campaign and Russia.

✔@realDonaldTrump
James Comey better hope that there are no "tapes" of our conversations before he starts leaking to the press!

White House press secretary Sean Spicer said at an afternoon briefing that Trump's warning was "not a threat," adding, "The President has nothing further to say on that."

Mike Pence gets caught making yet another bogus claim

There’s room for an interesting debate about who’s ultimately to blame for Mike Pence’s public falsehoods, but there’s no denying the fact that the list of the vice president’s bogus claims is getting longer. Politico reported yesterday:

Vice President Mike Pence has once again delivered the White House line, in the face of growing contradictory evidence, on a charged topic related to Russia’s possible connections to the Trump campaign.
In meetings on Capitol Hill and in interviews, Pence has said this week that Trump fired FBI Director James Comey on the recommendation of Deputy Attorney General Rod Rosenstein.

In fact, Pence was rather specific when talking to reporters on Wednesday, saying, “Let me be very clear that the president’s decision to accept the recommendation of the deputy attorney general and the attorney general to remove Director Comey as the head of the FBI was based solely and exclusively on his commitment to the best interests of the American people and to ensuring that the FBI has the trust and confidence of the people this nation.”
We now know these comments weren’t true – because Pence’s boss has now admitted as much. Trump acknowledged yesterday that his decision to fire the FBI director wasn’t related to the Justice Department’s recommendations, and wasn’t “based solely and exclusively” on the national interest. On the contrary, the president said it was Comey’s investigation into the Russia scandal that served as the motivation for the firing.

Clapper: US institutions 'under assault' from Trump

The only other time a FBI director was fired President Clinton fired FBI Director William Sessions in July 1993, following an ethics investigation of the director that was launched under Clinton's predecessor, George H.W. Bush. Duration: 2:39

Joe’s tough message to Republicans Joe Scabrough talks about the firing of James Comey and warns Republicans, that "the President is subverting the U.S. constitution, ‘If you allow this to go unchecked, you will be swept aside in 2018.” Duration: 4:28

Joe: The fish rots from the head Joe Scarborough and Mika Brzezinski discuss the ‘corruption and the lies that are entangling this White House and this president.’ Duration: 7:26