Background:
1. Lessons From History: Tips & Tools To Help You Understand HOW A Tyranny (Despotism) Can Take Root OR How To Avoid Oligarchies, Plutarchies & Dictatorships
2. Lessons In Politics From The Republicans 4 - Attack The Economy & Blame It On Your Opponents

The media loves to draw a false equivalency between right and left (since the Bush days, ... probably to keep the country at 50-50) but this is not true. The right's media machine is far worse in that it intentionally MISINFORMS it's viewers. That means that while it's acting like a news channel it's really a political propaganda channel PRETENDING to be a news channel. Any channel focused on political gain over helping their constituents is one that is dangerous to the Constitution as misinformation makes it easy to make the wrong decisions that leads to the Constitution being torn to shreds.

Now look, here is the problem of the Fox News echo chamber of misinformation which leaves citizens uninformed and incapable of making common sense decisions;

REPUBLICAN VOTERS DOUBT OBAMA'S AMERICAN CITIZENSHIP FEBRUARY 16, 2011 - Stephen is so proud to have been born in a country where unsubstantiated rumors about political opponents become majority beliefs. (1:23)


Notice that the 'protect the dictator' stance they have taken harkens back to the days of the Iraq Oil War coverup, when they were in power to attack the people with utter freedom;

Is the media covering the President-Elect fairly? Nov. 11, 2016 - 6:06 - Chris Wallace joins 'The O'Reilly Factor' to discuss the reporting on Donald Trump

Anyone familiar with the record of truth from Fox news and from it's pundits... AND from a proper scientific study done on the subject, that Fox News misinforms people... that means if the people follow their recommendations then they WON'T get what they want, i.e. a better life. All the other policy positions are irrelevant because they have been spoonfed through a channel DESIGNED to attack the populace.

Here is an outline of the Fox News echo chamber of misinformation;


Media Matters; New Study: Conservative Media Is An Echo Chamber That Increases Partisanship Vox Highlights Study: "Republicans Rely On A Media That Is More Likely To Echo Their Partisan Biases, And Democrats Rely On Media That Does Not Pick A Side"

Right-wing media has a noted effect on shaping its viewers perceptions.The conservative media echo chamber has been partly responsible for the rise of Donald Trump, by consistently providing a platform for his ideas and defending him when attacked. In addition, conservative media has created the environment where presidential candidates feel comfortable enough to claim that the media has a liberal bias and therefore shouldn't be trusted. This leads candidates to mold their candidacies towards what those who listen to conservative media want to hear and parrot popular conservative media hosts ideas and rhetoric.
In the April 1 article, the study highlighted by Matthews found these media echo chambers created by conservatives are having an impact. The study, conducted by two political science professors, argued that conservatives' "distrust of the mainstream media" caused them to "set up a parallel ecosystem to get their message out." Therefore, "Republicans rely on a media that is more likely to echo their partisan biases, and Democrats rely on media that does not pick a side and at least claims to be objective and empirical (whether or not it lives up to that promise)." The study also found that this echo chamber effect "has huge implications for how Democrats and Republicans view politics", "increas[ing] partisanship and ideological commitment": 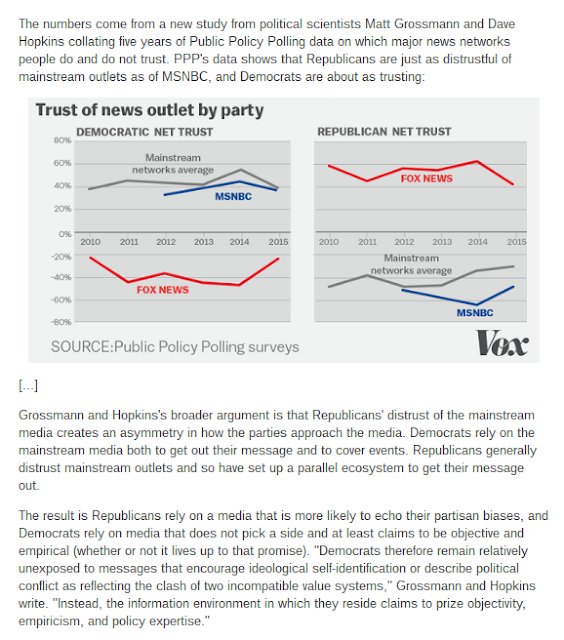 The rest of this post is a collection of videos that still exist illustrating the conservative echo chamber from my past posts on the subject.
GOP - SPECIAL VICTIMS UNIT JULY 27, 2011 - Conservative pundits hate it when liberals play the victim card because it distracts from the real victims: conservatives. (6:24)
Above: 'Conservative' Echo Chamber through Murdoch's Network (using multiple books on one view, talking about one perspective ONLY on a network owned by one man, i.e. the new republican party is an invention using multiple media channels all owned by the same group. Ironically, or perhaps, intelligently, the 'left' (i.e. the networks NOT owned by Murdoch) are grouped together as having a separate agenda thereby creating the 'Us vs. them' dynamic.
CONFIRMING ELENA MAY 13, 2010 - The New York Post isn't saying Elena Kagan is a lesbian, it's just asking the question next to a photo of her playing softball. (4:23)
Above: The train of planting News in the above echo chamber goes as follows - First story in the Wall Street Journal, Second Story in ...the NY Post and finally, news story on Fox News - Seems like different news sources commenting on a story but in reality it's ONE news story, created and promoted by the SAME news source.


MURDOCH HE WROTE FEBRUARY 16, 2011 - The Daily offers the convenience of using an iPad to read the news online without the Internet's annoying habit of being completely free. (4:46)
Above: Here is an example of using an echo chamber for JUST business reasons (i.e. Rupert Murdoch comes up with device and tries to sell it through his news channels)
JOBS BILL CLIPGATE SEPTEMBER 14, 2011 - If Barack Obama really believed in his jobs bill, he should have presented it in a leather-bound volume with gold filigree and illuminated initials. (3:03)
Above story only carried on Fox News/NY Post (Rupert Murdoch owned media)
INDECISION 2012 - CORN POLLED EDITION - RON PAUL & THE TOP TIER AUGUST 15, 2011 -Even when the media does remember Ron Paul, it's only to reassure themselves that there's no need to remember Ron Paul. (4:20)
Colbert Report: Tip/Wag - Breitbart
Breitbart News publishes an article that could have completely destroyed the credibility of Obama's pick for attorney general, Loretta Lynch -- if it wasn't completely untrue. (3:31)

The Colbert Report
Get More: Colbert Report Full Episodes,The Colbert Report on Facebook,Video Archive
Note: This one could be a mistake or done for "noble" reasons. The main culprit is the GOP establishment and Fox News
Here is an echo chamber using a different method (i.e. controlling sources of 'expert opinion' as opposed to the actual companies presenting the news). This is presented by Senator Bernie Sanders.
All of the above are examples of "echo chambers" - i.e. sources of information controlled by a few who use these sources to promote thier ideas over and over again while making them seem to be from independent (and therefore reliable) sources... but they are not. Listen to them and you will produce result the Citizens DON'T want but the Establishment DOES.

Source of the problem and conclusions;

There is a difference between what's good for the country and what any particular segment of the population THINKS is good for the country. For example; We know from science that increasing the minimum wage improves the economy and living standards of the people (thus increasing the middle class over time). We know what the Republican party advocates does the opposite (the Texas fertilizer bombing is a perfect example of that though a more mainstream example would be their continuous use of economic polices that we know through science AND history DON'T work). That said, there is a certain expectation the people have, i.e. they expect their lives to get better. If they get the same horseshit as before, they may ask for it in the beginning (because of the misinformation they've been fed) but they will wake up eventually to the fact that something is wrong and rebel again... in the past the Fox News echo chamber comes in handy to decoy the problem to some scapegoat (till now it was Obama... Hillary as a blonde woman would have been more difficult... but now I don't think these continuous decoys are gonna work... they didn't help Jeb Bush, the party's real nominee if the people has just listened!). THAT'S what Fox News is doing now, i.e. creating an environment for a dictatorship, like the one under Cheney-Bush, to flourish. (it's really all they know how to do). Frankly, if the GOP manages to destroy the economy like their plan seems to be... the one in charge gets blamed and they get off scott free with millions, if nor billions, of dollars.

In any case, implementing a GOP economic policy WILL lead to economic catastrophe... leave them alone for a second and they start putting in clauses to speed the chances of the destruction of the country... with both Houses they could destroy the economy in a forthnight - look to the Koch Brothers for the source of the problem). Note: One thing they seem to love to go for is the housing market.

The real threat are the GOP and Fox News. That has always been so and will always be so. Without them we have a Nation, with them we don't (can't really, they just won't let that happen, ever, under any conditions, they have too much to lose).

Here is an example of the GOP helping the wealthy while cutting the standard of living of everyone else AND telling them it's for thier own good (a standard GOP attack strategy that affects BOTH the economy and the rights of Citizens under the Constitution);

The following is an example the sort of class war the GOP (establishment Republicans) are engaged in (covered here as well);

WORST RESPONDERS DECEMBER 16, 2010 - Senate Republicans filibuster the Zadroga bill but pass tax cuts for the wealthy, which is great news for firefighters who make over $200,000 a year. (5:18)

STATE OF THE UNION 2011 - REPUBLICAN REBUTTAL JANUARY 26, 2011 - Paul Ryan sells his vision of limited government to a primetime audience, and Michele Bachmann speaks for the real America. (2:55) 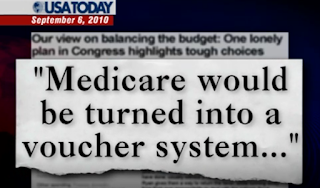 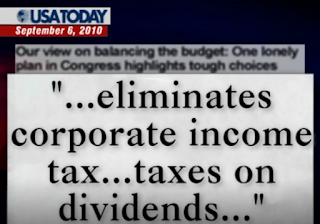 This method leaves the country with no revenue to function (thus we need new bridges and roads as they are falling apart) and no way to guarantee peace of mind to citizens so they can go about being productive and make money. The primary tactic seems to be to remove taxes from rich people at the cost of everyone else... which makes sense since they are supported by rich Plutarchs such as Rupert Murdoch and the Koch Brothers (who seem to be after the Constitution in particular).

To put it simply, Fox News is a channel for despots.


The End Of The American Constitution?