A collection of Daily Show videos as Bush/Republicans prepared to mislead the Nation in a quest to make money off of oil (as he did before President but now he had an army to help him and a Nation ready to sacrifice it's young to help Bush). Here is how it looked on the Daily Show. 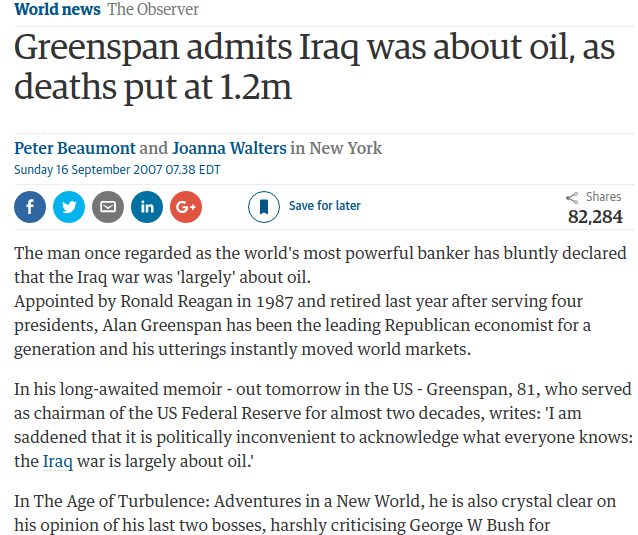 
PLANNED WAR WITH IRAQ JANUARY 20, 2003 - The Bush Administration plans a war with Iraq and a staring contest with North Korea is on deck. (2:28)

SLOWDOWN IRAQ - THE SHIELDS FEBRUARY 4, 2003 - You've got to know things aren't going well when your own citizens are willing to be human shields for the enemy. (2:43)


LEAVING IRAQ MARCH 17, 2003 - Steve Carell is informed of the imminent nature of the strike against Iraq and immediately leaves for The Daily Show studio. (4:13)


Later we got more proof that the Iraq War was being planned for oil;

Halliburton got $7B in no-bid Iraq contractsDuring Vice President Dick Cheney's tenure as its chief executive, the Halliburton Corporation altered its accounting policies so it could report as revenue more than $100 million in disputed costs on big construction projects, public filings by the company show. Halliburton did not disclose the change to investors for over a year.Vice President Dick Cheney’s stock options in Halliburton rose from $241,498 in 2004 to over $8 million in 2005, an increase of more than 3,000 percent, as Halliburton continues to rake in billions of dollars from no-bid/no-audit government contracts.Bush's Legacy: New Iraq Oil Law To Open Iraq’s Oil Reserves to Western CompaniesThe Halliburton Agenda: The Politics of Oil and Money
Bush's Legacy: Fired Army Whistleblower Receives $970K for Exposing Halliburton No-Bid Contracts in IraqDick Cheney: The Ultimate Laissez-Faire Capitalist...