ISIS Was, Basically, Founded By The GOP. In Particular, Cheney, Bush & John McCain.


Donald Trump has started making stuff up for some reason. One of the things he made up was that the source/founders of ISIS is Obama and not the group he is running for President from despite ALL the evidence to the contrary. A standard GOP ESTABLISHMENT political campaign.

As Trevor Noah put it, it's crazy to have to say this but Obama didn't found ISIS, Bush did... 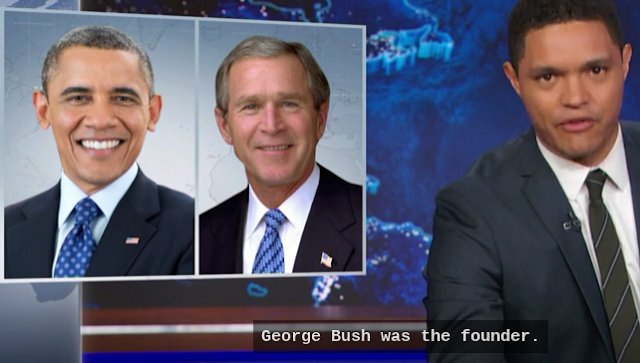 OK. Well, technically Bush-Cheney created the vacuum of power (see the ancient proof links at the bottom of this post) that allowed ISIS to take half of Iraq in like a day or two. He knew this in 1994 but greed "blinded" him in 2003:

Dick Cheney explains how Iraq would fall apart if we invaded in 1994:


But that's not the whole story. Back when Syria was in civil war there were many rebel groups. A moderate one (I think in the west) and a fundamentalist one in the south called "ISIS" or something like that. I (& most people looking at the conflict) supported the idea of arming the moderate rebels the "Free Syria Army" (thus creating a stable power eventually... at least, I thought this was the obvious choice) and John McCain supported the Saudi's idea of funding ISIS.

John McCain Tells on Himself: Refers to Syrian Rebels He Helped Fund and Arm as ISIS

'Thank God for the Saudis': ISIS, Iraq, and the Lessons of Blowback U.S lawmakers encouraged officials in Riyadh to arm Syrian rebels. Now that strategy may have created a monster in the Middle East. 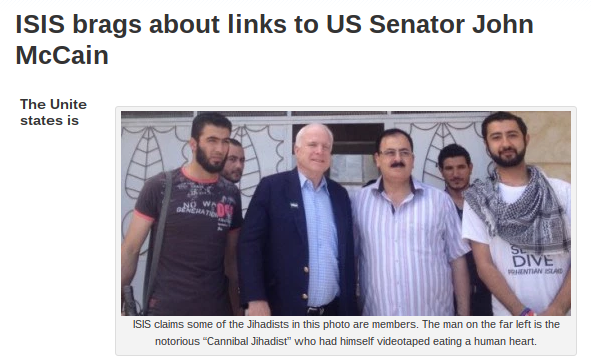 The international media is also reporting that the United States gave anti-tank missiles to Turkey to distribute to Jihadists groups. The entire mission was green lighted by US Senator John McCain.
Click here to read article 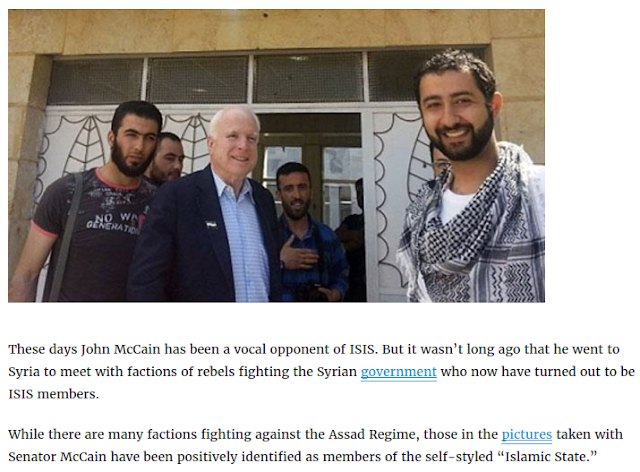 It is unclear whether ISIS would have gotten as powerful as it is today without the help of John McCain and his allies. One thing I can be sure of is that the media became useless and even monstrous during this debacle/crisis. Never trust the media to do the right thing but do trust them to do the wrong thing with a single minded moronic passion influencing everyone and calling it the peoples choice. I should mention that many in the media had determined that they were right in not stopping the slaughter in Syria, probably in reaction to John McCain & The GOP rather than any logic or strategy itself.

Daily Show: Cheney literally said Iraq would be a quagmire before invading it...

ISIS was funded (to some extent) by the US but the power vacuum in Iraq, making it possible for ISIS to exist, was created by Bush-Cheney;