In response to my request on twitter for some news from the Libertarian Candidates I seem to have got my first glimpse in to how the mysterious "third party" is doing this year (ballot access in 34 States VS the billions of dollars worth of free publicity Trump gets i.e. 75% of States have Libertarians on the ballot);

MSNBC LIVE 7/20/16 Gary Johnson on state of the 2016 race-  Fmr. Gov. Gary Johnson, the Libertarian nominee for president, speaks with Steve Kornacki about his efforts to upend the 2016 presidential race and the policies he is running on. Duration: 4:14 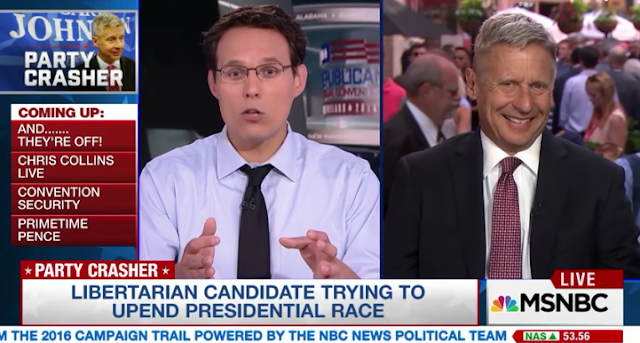 Q: What's your pitch to Democrats? (I added links to my blog posts in the text to highlight information) 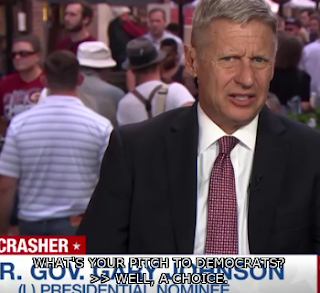 Gary Johnson: Well, A choice. Personal Liberty, Personal Freedom. It's fundamental to be an American. So, marriage equality, a woman's right to choose, legalizing marijuana, crony capitalism is alive and well. Governments can play a really big  role in creating equal opportunity. Which I think is something that we all really cherish. Income equality. That's a whole another topic that taking from somebody to give to somebody else. Equal opportunity. Look, if we all recognize that we have an equal shot at everything that this country has to offer, then we're in good shape.

On the Libertarian choice this year;

It's a third voice that I think represents most of America. Keep Government out of my bedroom, out of my pocketbook, and hey, when it comes to these military interventions, are they having the unintended consequence of making things worse, not better? Rule the world with the free market."

"Rule the world with the free market"... sounds like Isaac Asimov's book Foundation, i.e. defeat the enemy through trade. But in the book the citizens of the country that was using this technique didn't lose jobs but gained them. As Bernie points out, that's not what's been happening with the TPP. Could incentives, properly organized, be the answer (I'm sure some if not all of Bernie's solutions involves incentives of some sort to fix the problem and incentives rather than force/punishments would seem like a good direction for Government to go).

Online Ebook: On Incentives as a Preferred Instrumentof Corporate and Public Policy

There certainly is place in 2016 for a third party; 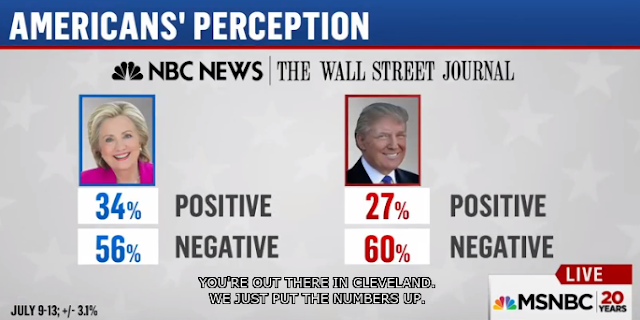 Moreover, the Libertarians have largely solved a third party’s biggest problem, ballot access, after decades of work and great expense every election cycle since their first presidential race in 1972. (They won an electoral vote from a faithless Republican elector that year, making their vice presidential candidate, Tonie Nathan, the first woman to receive an electoral vote.) They are already locked into 32 ballots for November. Though the signature deadlines for many states still lie ahead, the party is confident it's on track to nab them all.Read more: http://www.politico.com/magazine/story/2016/05/never-trump-2016-elections-libertarians-213917#ixzz4EzQat9yE Follow us: @politico on Twitter | Politico on Facebook


But the Libertarians say this year is as good a chance as they’ve had to make their way into the national spotlight. Asked about specific strategies to attract Republicans this cycle, Johnson said defiantly: “If you believe we should deport 11 million illegal immigrants and build a fence across the border and believe we should kill the families of Muslim terrorists and bring back waterboarding or worse, if you believe free trade is about applying tariffs to incoming goods and services—then I’m not your guy.”Read more: http://www.politico.com/magazine/story/2016/05/never-trump-2016-elections-libertarians-213917#ixzz4EzQ5ETOO Follow us: @politico on Twitter | Politico on Facebook