Former Arkansas Governor, who DESTROYED HIS PUBLIC OFFICE RECORDS rather than releasing his emails (what's he hiding from his Governor days?) and sold a "miracle cure" to diabetics like a common con man (given his GOP background of fake economics, Iraq War Treason etc., it actually makes sense)

This is a generalized smear designed to get people angry at Obama and Muslims for being a "special interest group" which they are not. Tactic used is described adequately by this image; 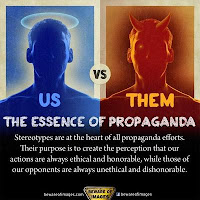 Hasan Minhaj satirized this extreme fear that THESE GUYS ARE ACTUALLY PROMOTING, using thier own staff hypnotists (i.e. people who understand how language influences perception.... that combined with media unaccountable to the people and who the ability to change laws. That's just where we are.)

An actual hypnotic technique designed to get a person thinking along the lines already established. The goal here is to get people panicking with their own thoughts and thus create an effective scapegoat to detract from their own crimes (I made a short list above).

I guess they are talking about not prosecuting some innocent relative like we didn't prosecute Timothy McViegh's family or like how Norway didn't prosecute Andre Breviks family DESPITE clear evidence that these individuals had become extremists. (There are tons of other such examples, these are just two of the biggest.BTW, notice Andre Brevik was declared sane while we like to call white shooters insane and only the colored ones sane. Interesting huh?)

No one has unlimited resources. If a person is under hardcore investigation then we need to have a block on him for buying guys in the same way we would have a block on him flying. The reality is that the FBI did everything they could WITHIN the laws passed by Congress (in case Traitor Huckabee doesn't remember... it's Congress that is supposed to pass the laws and it didn't and hasn't passed a law that would stop such a person from buying a gun.... the blame CLEARLY lies on the GOP Congress. Same Congress that is too fearful to declare war on Congress. What Huckabee is trying to do here is deflect blame to innocent victims like the GOP have done multiple times before).

Clearly, there has to be a law stopping a person from buying a gun when under investigation and a way for a person to fight for the right to buy a gun if he does go to buy a gun and finds out he can't. To not close this loophole for terrorists or potential terrorists to buy guns is criminal behavior. But then again, the GOP is nothing if not a criminal organization and the Democrats are helping them but not indicting them (& I think they have many of the same Corporate buddies which is why they pardon the GOP for any crime they commit). Ultimately what we have here is a terrorist organization arguing that we are being too nice to Muslims and instead we should blame all Muslims for the actions of a few. This same logic the GOP goes out of it's way not to apply to white terrorists to an extent that's so ridiculous that I think it's a crime they haven't been indicted yet. Proofs...

Introduction To The GOP