Ted Cruz Can Never Be President, Ever. If Ted Cruz Ever Gets Nominated (Which Is Unlikely) He Will Be Sued For Not Being A Natural Born Citizen & He Will Lose.


Being "natural born", LITERALLY MEANS YOU WERE BORN IN AMERICA... yet he insists that he's a natural-born. It's just to weird to be true, one would think; 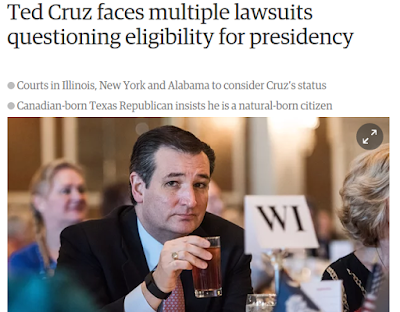 Even going by Ted Cruz's own beliefs he would lose if sued for not being a natural born while running for president;

Boston Globe: Under Ted Cruz’s own logic, he’s ineligible for the White House

There’s more than meets the eye in the ongoing dustup over whether Ted Cruz is eligible to serve as president, which under the Constitution comes down to whether he’s a “natural born citizen” despite his 1970 Canadian birth. Senator Cruz contends his eligibility is “settled” by naturalization laws Congress enacted long ago. But those laws didn’t address, much less resolve, the matter of presidential eligibility, and no Supreme Court decision in the past two centuries has ever done so. In truth, the constitutional definition of a “natural born citizen” is completely unsettled, as the most careful scholarship on the question has concluded. Needless to say, Cruz would never take Donald Trump’s advice to ask a court whether the Cruz definition is correct, because that would in effect confess doubt where Cruz claims there is certainty.
People are entitled to their own opinions about what the definition ought to be. But the kind of judge Cruz says he admires and would appoint to the Supreme Court is an “originalist,” one who claims to be bound by the narrowly historical meaning of the Constitution’s terms at the time of their adoption. To his kind of judge, Cruz ironically wouldn’t be eligible, because the legal principles that prevailed in the 1780s and ’90s required that someone actually be born on US soil to be a “natural born” citizen. Even having two US parents wouldn’t suffice. And having just an American mother, as Cruz did, would have been insufficient at a time that made patrilineal descent decisive. 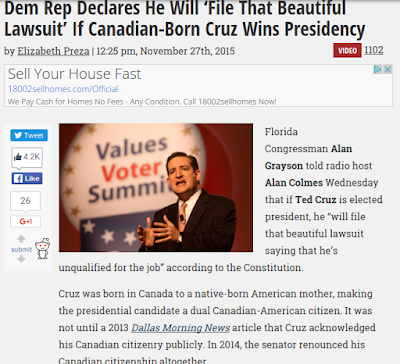 Here is an in-depth analysis by liberals (the educated half of America who, ironically, seem to be closed to new ideas on many things if one can put the word "conspiracy" LINK on it) of why Ted Cruz does not legally qualify to be President;


Why Cruz’s WH eligibility is not settled law - Sen. Ted Cruz has cited a Harvard Law Review online commentary as proof he is a citizen from birth, but another much more in-depth piece from Boston University calls that into question. The co-author of that BU article, Sarah Duggin, joins Lawrence for more.