Obama issues an executive action on guns focusing on universal background checks, particularly the gun show loophole that would allow criminals and illegal immigrants to buy guns unhindered. (comments below) 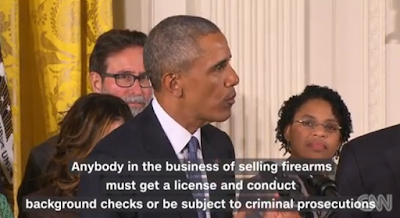 Obama did the right thing implementing universal background checks for guns because only in lawless lands are guns available freely to anyone including mass murderers (such as Syria). Many people, including me, were very surprised to learn we didn't have universal background checks. GOP opposed this decision (given it was before they actually read the decision as is consistent with their strategy of attacking America & Americans while saying the opposite... actions don't speak louder than words on the right). Opposing background checks for criminals and illegal immigrants is a criminal act in and of itself. No surprise that the GOP added one more crime to their roster. For the GOP is win or bust, quite literally.

First off, I'm pro 2nd Amendment and have posted extensively on the topic. More notably:

GOP, Fox News & NRA Have Been Pushing Limitless Guns (& No Background Checks) For A Long Time, Is It Really A Surprise That Some Get Used On Spring Break

One thing I covered, as did everyone else, was that approval for background checks for people buying guns is at over 90%. This means that people agree that a person shouldn't be able to legally buy a gun off the street.

If someone buys a gun they need to be
1. A Citizen (i.e. no illegal immigrants should be able to buy guns) and
2. Not a violent criminal (we have mass incarceration issues as well which complicates the issue).

Useful perspectives to know about;

Obama's Town Hall On This Action (something many on the right may not have watched);