Background:
Ted Cruz is So Dumb He Thought Obamacare Had Already Started When It Hadn't! (Caught By Stephen Colbert)

Ted Cruz is either a man who is very dumb and has no idea what's going on OR he is intentionally attacking the United States as a spy from Canada.

This post is divided into 3 parts, ultimately proving that Ted Cruz is probably an enemy of the United States and since Ted Cruz was born in Canada (& NBC says "So What?"!), we need to have a public lie detector test before we continue to listen to this - either really dumb or very treasonous - guy.

Lets look at the evidence shall we;

1. Ted Cruz Shut Down The Government; 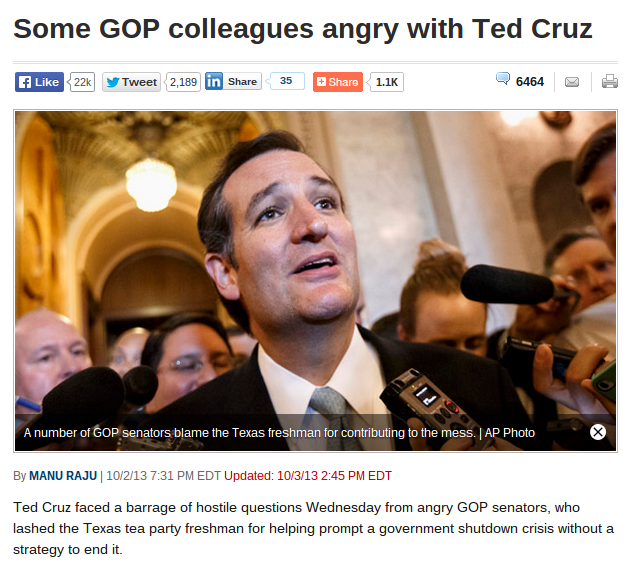 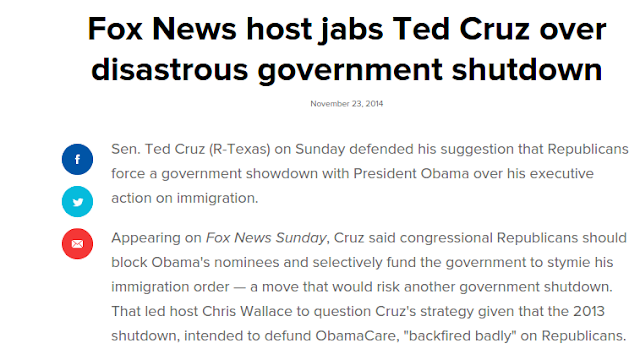 2. When He Inconvenienced Veterans Ted Cruz's Political Allies Lied To The Vets About Who Was Responsible For The Shutdown!!!! They know Ted Cruz is doing bad things but they continue to help him!

Lying to veterans is going to far.


The Height Of Bulls**t: Could there be a higher octane fuel for the Fox News false outrage exploitation engine than wheelchair-bound World War II veterans?  (06:19) :
The Daily Show
Get More: Daily Show Full Episodes,The Daily Show on Facebook

Representative Scott Rigell: Republican Traitor...
The Daily Show
Get More: Daily Show Full Episodes,The Daily Show on Facebook
Above: One Republican congressman voted against shutting down the government, so Samantha Bee finds out what's wrong with him.

Below: U.S. Senator Lindsey Graham's Utter Hypocrisy In Blaming Another Branch Of The Government From His Own For What He Voted For (you do know The House is part of the Federal Government as per the Constitution don't you?).


Moment of Zen - The Low Cost of Government Shutdown Stuart Varney reassures his viewers about the cost of a government shutdown.  (00:20) :
The Daily Show with Jon Stewart
Get More: Daily Show Full Episodes,The Daily Show on Facebook

FOR OTHER VIEWERS, EVEN THE CONSERVATIVE ESTIMATE OF $200 MILLION IS ALOT...

BTW, I NOTICED ANOTHER PATTERN OF BEHAVIOR, SEVERAL ACTUALLY, BUT ONE IN PARTICULAR...

And now what is Ted Cruz doing? Denying he ever attacked the United States by shutting it down for fun and causing so much monetary loss.

Ted Cruz’s shutdown amnesia: Who’s to blame for the 2013 shutdown? Everyone but Ted Cruz!Wingnut's constantly evolving history of government shutdown he caused casts an intriguing villain: everyone else


The only way it would be OK for a Canadian to take part in our National Elections (though it shouldn't happen in the first place) is to have him take a lie detector test.