Ted Cruz is So Dumb He Thought Obamacare Had Already Started When It Hadn't! (Caught By Stephen Colbert)


Media didn't make much of this but it is a very important point to make. Ted Cruz was talking about how bad people's lives have gotten from Obamacare when it hadn't even started. IN other words, before we have ANY statistics on how Obamacare has been received Ted Cruz was basically saying that the stats were in and they were awful. Do you want a President that can't even keep track of the major issues of the day to the point where he starts lying about something before it even starts? If you are going to lie, at least lie in accordance with actual facts, right? But maybe he wasn't lying. He is Canadian and if South Park is any measure of Canada, then Canadians are very stupid and Ted Cruz proves that. 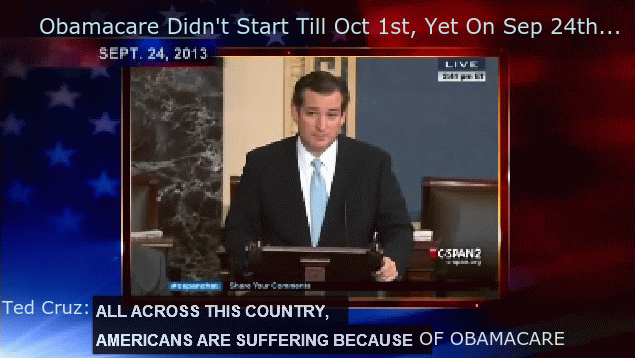 Healthcare Bill & Ted's Excellent Adventure - The Bore-ax - To express his opposition to Obamacare, Ted Cruz cites a children's book about a stubborn jerk who decides he hates something before he's tried it.  (05:53) :
The Daily Show with Jon Stewart
Get More: Daily Show Full Episodes,The Daily Show on Facebook

NOTICE TED CRUZ IS STILL TALKING AS IF OBAMACARE HAS ALREADY STARTED...

In 16 States people are being kept in the dark about Obamacare!

Obamacare Navigators - Republican lawmakers in Florida restrict Obamacare navigators because they might steal the identity of the uninsured poor.  (03:12) :
The Colbert Report
Get More: Colbert Report Full Episodes,Video Archive

16 STATES ARE COVERING UP INFORMATION ABOUT OBAMACARE? WHICH 16 STATES? NOT GOP STATES? I HOPE NOT!