An overview of Bernie Sanders policy plans with videos & links to illustrate the point of them;

Bernie Sanders: The American people must demand that Congress and the White House start protecting the interests of working families, not just wealthy campaign contributors. We need federal legislation to put the unemployed back to work, to raise wages and make certain that all Americans have the health care and education they need for healthy and productive lives.

As Vermont's senator, here are 12 initiatives that I will be fighting for which can restore America's middle class. WATCH BERNIE'S FLOOR SPEECH

1. Rebuilding Our Roads   We need a major investment to rebuild our crumbling infrastructure: roads, bridges, water systems, waste water plants, airports, railroads and schools. It has been estimated that the cost of the Bush-Cheney Iraq War, a war we should never have waged, will total $3 trillion by the time the last veteran receives needed care. A $1 trillion investment in infrastructure could create 13 million decent paying jobs and make this country more efficient and productive. We need to invest in infrastructure, not more war.

Overview of ideas expressed in #1: Rebuilding Our Roads


2. Reversing Climate Change   The United States must lead the world in reversing climate change and make certain that this planet is habitable for our children and grandchildren. We must transform our energy system away from fossil fuels and into energy efficiency and sustainable energies. Millions of homes and buildings need to be weatherized, our transportation system needs to be energy efficient and we need to greatly accelerate the progress we are already seeing in wind, solar, geothermal, biomass and other forms of sustainable energy. Transforming our energy system will not only protect the environment, it will create good paying jobs.

3. Creating Jobs   We need to develop new economic models to increase job creation and productivity. Instead of giving huge tax breaks to corporations which ship our jobs to China and other low-wage countries, we need to provide assistance to workers who want to purchase their own businesses by establishing worker-owned cooperatives. Study after study shows that when workers have an ownership stake in the businesses they work for, productivity goes up, absenteeism goes down and employees are much more satisfied with their jobs.

Overview of ideas expressed in #3:

Related Articles:Fact Check: Tax Breaks for Shipping Jobs OverseasECONOMY - Outsourcing and Privatization are Killing America (there is a middle point between All Government & All Private that has to be maintained that I discussed here)EXCLUSIVE: Romney Invested Millions in Chinese Firm That Profited on US Outsourcing - The GOP candidate decries China poaching US jobs. But at Bain he held a large stake in a Chinese company that did just that.
David Perdue Says He's 'Proud' Of His Background Outsourcing Jobs


4. Protecting Unions   Union workers who are able to collectively bargain for higher wages and benefits earn substantially more than non-union workers. Today, corporate opposition to union organizing makes it extremely difficult for workers to join a union. We need legislation which makes it clear that when a majority of workers sign cards in support of a union, they can form a union.


5. Raising the Wage   The current federal minimum wage of $7.25 an hour is a starvation wage. We need to raise the minimum wage to a living wage. No one in this country who works 40 hours a week should live in poverty.

Overview of ideas expressed in #5:

Five years later – despite cost increases of 11% and record income inequality, and despite an unprecedented, nationwide push for higher wages in the streets, at the ballot box, in statehouses and at businesses small and large – it remains hopelessly stuck there due to congressional indifference.
Who opposes it? Not over 600 economists, including seven Nobel Prize winners, who believe a higher minimum wage will generate billions of dollars in new economic activity, nor Wall Street analysts worried that low wages are holding back growth.

The Economist: Raising the minimum wage is both wise and popular. Too bad Republicans haven't figured this out yet 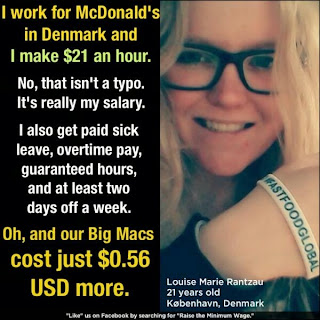 Overview of ideas expressed in #6:

This shouldn't be controversial. There isn't anything in the country that isn't automated enough for any male or female to be able to handle it. And experience has been proven to remove the differences in performance in the social vs mechanics arena that male & female brains seem to be predisposed to. The only thing where gender is relevant is in sex specific tasks such as providing a womb for a baby etc.

7. Making Trade Work for Workers   Since 2001 we have lost more than 60,000 factories in this country, and more than 4.9 million decent-paying manufacturing jobs. We must end our disastrous trade policies (NAFTA, CAFTA, PNTR with China, etc.) which enable corporate America to shut down plants in this country and move to China and other low-wage countries. We need to end the race to the bottom and develop trade policies which demand that American corporations create jobs here, and not abroad.


8. Cutting College Costs   In today's highly competitive global economy, millions of Americans are unable to afford the higher education they need in order to get good-paying jobs. Further, with both parents now often at work, most working-class families can't locate the high-quality and affordable child care they need for their kids. Quality education in America, from child care to higher education, must be affordable for all. Without a high-quality and affordable educational system, we will be unable to compete globally and our standard of living will continue to decline.

It's become another form of debt slavery. I kinda talked about that here.

9. Breaking Up Big Banks   The function of banking is to facilitate the flow of capital into productive and job-creating activities. Financial institutions cannot be an island unto themselves, standing as huge profit centers outside of the real economy. Today, six huge Wall Street financial institutions have assets equivalent to 61 percent of our gross domestic product - over $9.8 trillion. These institutions underwrite more than half the mortgages in this country and more than two-thirds of the credit cards. The greed, recklessness and illegal behavior of major Wall Street firms plunged this country into the worst financial crisis since the 1930s. They are too powerful to be reformed. They must be broken up.

Overview of ideas expressed in #9: Breaking Up Big Banks

It's what the treasury department promised to do to prevent another financial crisis from occurring. This shouldn't be a part of the debate, rather, it should have been taken care of by now.

Related Posts:
Useful Information: A video of an enlightening interview from 2009 on the Bailouts.
With The Rider Traitor Inc. Slipped Into The Spending Bill... The GOP Is Making It Clear That They Are Determined To Destroy The Economy.Useful Bailout Links and Congress Video Clips

10. Bringing Health Care to All   The United States must join the rest of the industrialized world and recognize that health care is a right of all, and not a privilege. Despite the fact that more than 40 million Americans have no health insurance, we spend almost twice as much per capita on health care as any other nation. We need to establish a Medicare-for-all, single-payer system.

Overview of ideas expressed in #10: Medicare For All


11. Ending Poverty   Millions of seniors live in poverty and we have the highest rate of childhood poverty of any major country. We must strengthen the social safety net, not weaken it. Instead of cutting Social Security, Medicare, Medicaid and nutrition programs, we should be expanding these programs.


12. Stopping Tax Dodging Corporations   At a time of massive wealth and income inequality, we need a progressive tax system in this country which is based on ability to pay. It is not acceptable that major profitable corporations have paid nothing in federal income taxes, and that corporate CEOs in this country often enjoy an effective tax rate which is lower than their secretaries. It is absurd that we lose over $100 billion a year in revenue because corporations and the wealthy stash their cash in offshore tax havens around the world. The time is long overdue for real tax reform.