Beginning with the Daily Show;

Notice how the people who this bill was written for were standing around Indiana's Governor Pence when he signed the bill; 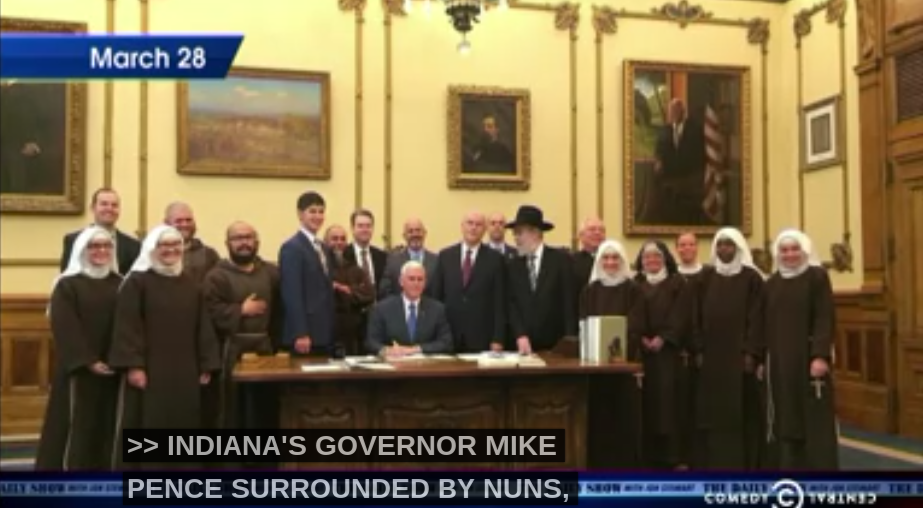 Now, notice that this law is to help the above people practice their beliefs without Government interference. IN other words, they wish to practice the religious beliefs of theirs which was outlawed by the US Constitution. Thier religion says you can kill someone who doesn't listen to your priest. The Constitution doesn't allow them to do that. Thier bible tells them they can stone adulterers to death and that pre-marital sex should be punished with death. The Constitution says they cannot go around telling people what to do. Thier religious laws tell them that gays are an abomination. The Constitution says no citizen can be treated badly, period.

In other words, what we have here is a law that limits Constitutional law within his State so that the discrimination allowed by religion, from persecuting gays, to stoning unmarried sexual partners to keeping slaves will be allowed again without the Government stepping in and saying "this is not who we are".

AND, although the GOP insists through it's word manipulation (or plain avoidance of words which also proves deception towards it's constituents by the GOP) that this is a "Religious Freedom Bill", the American people can understand than religious freedom is about being to live without discrimination while allowing discrimination "for religious reasons" is exactly what the Constitution was written to avoid. As one communities prophet would be a sorcerer in another ... or simple blasphemy could have reached execution status in societies that fall to fear and gossip as thier main modes of communication.

The Founding Fathers saw this problem in thier own society and wrote the Constitution to stop religious people from following scripture in it's discriminatory capacity so people could live if they weren't religious or were from a different religion or sect than the dominant religious group in the society. The law the GOP is calling "Religious Freedom Bill" could just as well be called "Religious Discrimination Bill" if it wasn't for the word games the GOP is playing to try and confused the facts around the issues to misinform it's base and the American people to whatever extent it can.

IN one image, this is the law the GOP is seeking to pass with it's "religious freedom" bills; 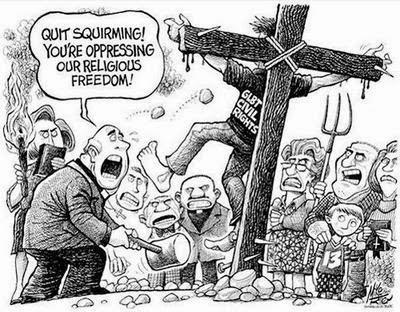 Indiana an object lesson for wary Arkansas governorMayor Mark Stodola, of Little Rock, Arkansas, talks with Rachel Maddow about his concerns that a newly passed Arkansas discrimination bill will discourage investment by tech companies, and his hope that the governor will prevent the bill from becoming...

http://on.msnbc.com/1xL3Gd4 GOP candidates back religious freedom policy Steve Kornacki talks to New York Times political reporter Nick Confessore about how republican presidential candidates have voiced support for the religious freedom bill in Indiana, and whether it will help or hinder their bid for the White House.

Indiana an object lesson for wary Arkansas governor Mayor Mark Stodola, of Little Rock, Arkansas, talks with Rachel Maddow about his concerns that a newly passed Arkansas discrimination bill will discourage investment by tech companies, and his hope that the governor will prevent the bill from becoming...


The GOP’s collision courseThe response to the ‘religious freedom’ legislation in Indiana and Arkansas is highlighting a divide between Republicans and a growing national consensus on gay rights. Dana Milbank, Gregory Angelo, and Sandy Rios discuss.


The GOP's gay rights contradiction - Jeb Bush may be one of the most pro-gay rights Republicans ever to run for president, but he still has a long way to go.