The GOP's Interesting Religious Positions On Women's Issues & The Weather


The GOP is using religion to justify slandering women and making up medieval age reasons for the weather.

First, how "God" is going to be one of the strategies some GOP are going to use to fight Hillary, which shows they are fundamentalist religious party & not a constitutional one.


Second, notice how blaming bad events on God and not using science to explain the disasters has become an epidemic giving the impression that the back waters of America may be one of the backwaters of the western world (even Christian musicians seem to think America was the first in the western world to ban slavery when it was actually the last - another reason why every other white country on this planet sees America as a backwater country to some extent);

WI agency bans mention of climate changeChris Hayes talks to the only member of the Wisconsin Board of Commissioners of Public Lands to vote against a prohibition on discussion or work related to climate change. Duration: 6:32


Florida worker sent home for sharing climate change views?Even as Florida Governor Rick Scott denies reports of an unwritten policy banning administration officials from using the term "climate change," an employee of the Florida Department of Environmental Protection says he was suspended for expressing his views on climate change. He joins Chris Hayes to tell his story.

'Ignorance is deadly' about climate changeRepublicans denial of climate change could have irreversible effects, as states like California are “sounding the alarm” on the serious drought caused by the warming temperatures. Ed Schultz, Rep. John Garamendi, Paul Douglas, Peter Gleick and Scott Paul


Can this country go ‘carbon-neutral’ by 2021?Chris Hayes talks with the Costa Rican ambassador to the U.S., Román Macaya, about how Costa Rica was able to go months without burning fossil fuels.

Louisiana locals fight plan to burn millions of pounds of military wasteBrian Salvatore, L.S.U. chemistry professor, talks with Rachel Maddow about the fight by one community in Louisiana to find an alternative to the burning of millions of pounds of discarded artillery propellant stockpiled in an open field.


Can this country go ‘carbon-neutral’ by 2021? Chris Hayes talks with the Costa Rican ambassador to the U.S., Román Macaya, about how Costa Rica was able to go months without burning fossil fuels. 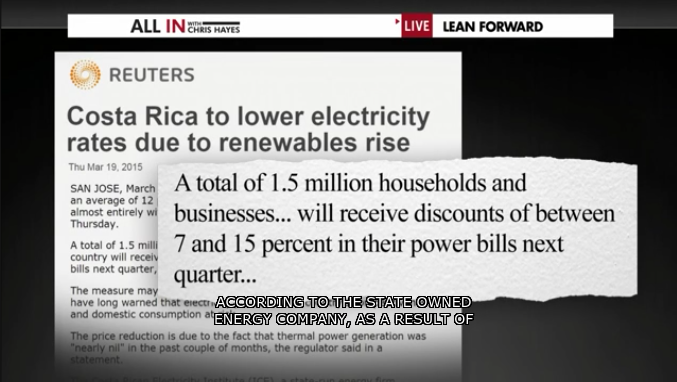