Why Prime Minister Of Israel, Benjamin Netanyahu, Can't Be Trusted

First off, lets understand what the GOP stand for. They stand for a tiny group of rich people and have a base that's so dumb they will believe fake economics which allows the GOP to use the votes & support of these clueless people to push through ideas that actually oppress MOST of their followers.

Notice how often Netanyahu has allied himself with the GOP. Also how creepy his voice is when he is trying to convince everyone to listen to him. It's like a pedophile uncle who tries to charm the family to get close to the kids.

GOP lied about Iraq, everything they said about Iraq was wrong. Netanyahu was one of them:

Netanyahu becomes political player, so Kerry treats him like one
Secretary of State John Kerry testified on Capitol Hill yesterday, and going into the hearing, it was widely expected that he’d tout the importance of international nuclear talks with Iran. He did exactly that, though he also went a little further in challenging a critic of those talks.

Secretary of State John Kerry reminded Americans on Wednesday that Prime Minister Benjamin Netanyahu of Israel, who is expected to denounce a potential nuclear deal with Iran during an address to Congress next week, also visited Washington in late 2002 to lobby for the invasion of Iraq.
Apparently referring to testimony on the Middle East that Mr. Netanyahu delivered to Congress on Sept. 12, 2002, when he was a private citizen, Mr. Kerry told the House Foreign Affairs Committee, “The prime minister, as you will recall, was profoundly forward-leaning and outspoken about the importance of invading Iraq under George W. Bush, and we all know what happened with that decision.”

In 2002, Netanyahu assured lawmakers that invading Iraq was a great idea. “If you take out Saddam, Saddam’s regime, I guarantee you that it will have enormous positive reverberations on the region,” he said at the time.
We now know, of course, that Netanyahu’s guarantee was spectacularly wrong, which matters insofar as credibility still counts – the same Israeli leader is now telling lawmakers an international agreement with Iran would be a disaster for the United States and its allies. Kerry’s point wasn’t subtle: those who were this wrong before probably shouldn’t be trusted to be right now. 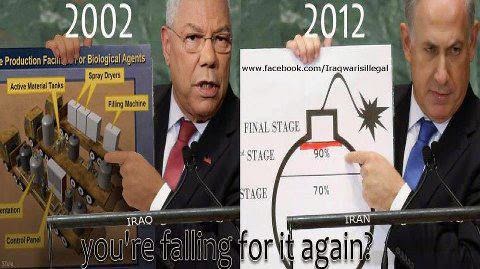 
Netanyahu, Boehner deal with their ‘colossal mistake’
As a matter of diplomatic history, it remains a debatable point. Let’s not forget that relations between the two allies have hit rough patches several times over the decades, most notably under Ronald Reagan, who repeatedly clashed with Menachem Begin. Haaretz’s Chemi Shalev joked a while back, “[I]f Obama treated Israel like Reagan did, he’d be impeached.”
But even if we put aside McCain’s knee-jerk desire to blame Obama for anything that comes to mind, it’s fair to say American tensions with Israel have reached an awkward, almost uncomfortable, level. Understanding why matters, and the recent, unprecedented partnership between congressional Republicans and Israeli Prime Minister Benjamin Netanyahu, who teamed up to sabotage international nuclear talks with Iran, appears to have undermined the alliance in rather profound ways.
Eugene Robinson’s latest column strikes all the right notes, noting that Netanyahu and House Speaker John Boehner (R-Ohio) “made a colossal mistake … and the move has ricocheted on both of them.”

Why on earth would anyone think it was a good idea to arrange for Netanyahu to speak to a joint session of Congress without telling Obama or anyone in his administration about the invitation? … [I]nviting a foreign leader to speak at the Capitol without even informing the president, let alone consulting him, is a bald-faced usurpation for which there is no recent precedent. […]
Netanyahu, for his part, may have thought this was a way to boost his prospects in the upcoming Israeli election, scheduled for March 17. Or he may have fantasized that somehow, by openly siding with the Republican Party, he could snatch U.S. foreign policy out of Obama’s hands. Judging by the pounding he is taking from the Israeli media, he was mistaken on both counts.

Republicans and Netanyahu likely wanted to shift the focus to derailing international diplomacy, but they’ve instead been forced to explain who’s responsible for this fiasco.