Notice the utter craziness of this free market conservative;

Mr. Unclean - North Carolina Senator Thom Tillis stands by his free-market principles and suggests that employees shouldn't be required to wash their hands before returning to work. (5:32):

Me: Sometimes red tape can inhibit business, but to say all business are being inhibited by red tape here in America is a little disingenuous.

DS: Tilis: We need to reduces regulations. The overreach is destroying our opportunities. Government needs to get out of the way.

Me: This has been the mantra since Reagan. Proven false under Reagan and both Bushs. How many more times do we have to repeat history to realize that bullshit is bullshit?

DS: Jon: It getting to a point where a man can't open a car wash, a cafe, or a big leafed covered pit with spikes at the bottom of it or a tattoo baby parlor. Damn you Government (sarcastically) 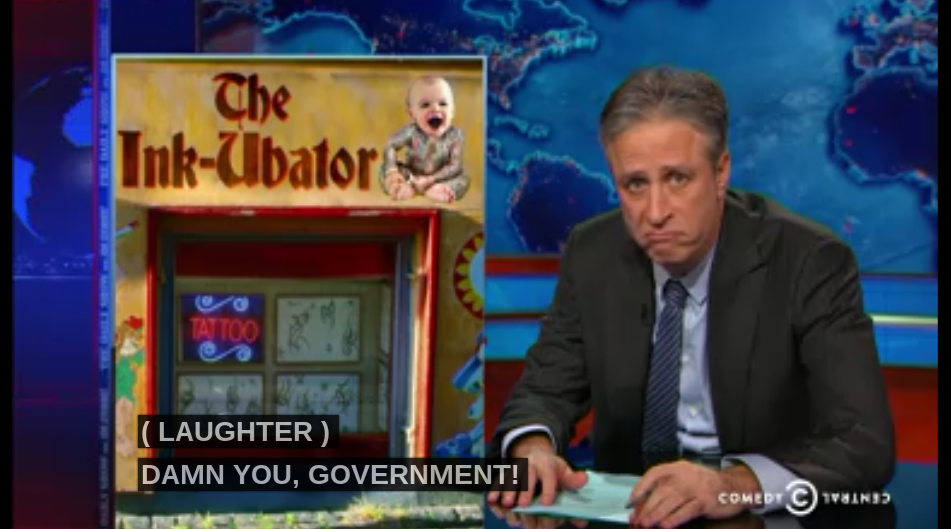 Jon Stewart is being sarcastic here saying "what? do you think we can't open a cafe?" and 'too bad rules and regulations made it difficult for you to open your crazy ideas simply because you think you should be free to do what you want irrelevant to how many people you may hurt. (something we have a growing body of statistics for - both real and fake).

Next this same thoughtless conservative finds himself in a real life situation where he wants to remove a regulation saying an employee preparing food & drink should wash thier hands and replace it with a regulation that tells costumers that employees don't wash hands so that the bad publicity (which he equates with the free market) can take care of the problem.

As Jon points out, all he wants to do is replace this sign...
(this is too much red tape? That's ridiculous!) 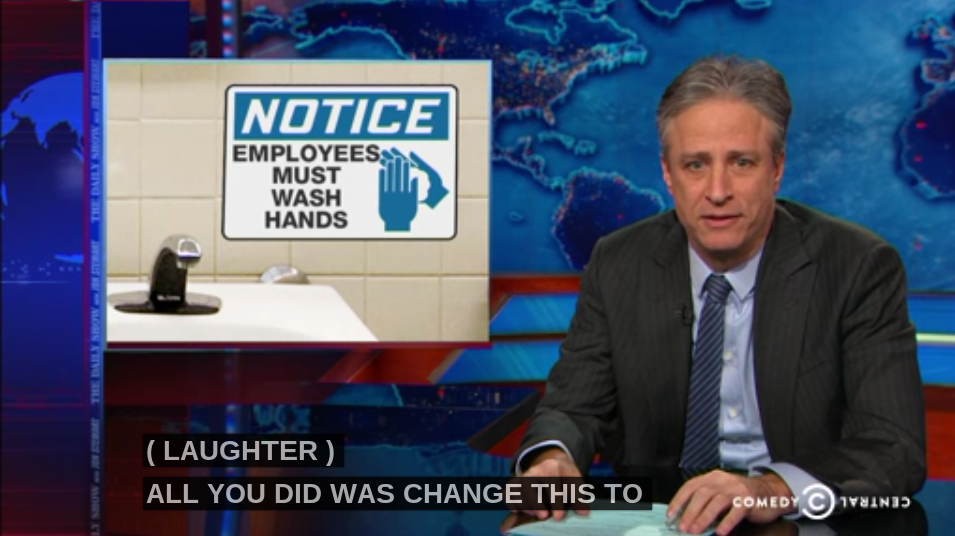 A free market isn't when there are absolutely no rules (that's actually called "lawlessness" not the free market). A free market means one can enter the market easily and leave it easily. Living in the woods can be done with absolute freedom but you can't call that a country OR a society as it has no sort of infrastructure to keep it growing or even safe.

But, despite the lack of roads, firemen, cops, towns, cities, manufactured goods, variety of foods etc. living in the woods will come with complete freedom from laws and regulations.

In a completely lawless - no rule - country. If you enter the market with your shop another person can come, take your shop (kill you if he wants) and it's fine because there are no regulations/laws to say he can't do that. This "might is right" sort of living that one expects from cavemen and not civilized society is what the Republicans mean - in practice - when it comes to their "free market" rhetoric. No rules & regulations means Rupert Murdoch can buy all of media.

No law requiring truth from the media means he can lie & manipulate people. This sort of behavior creates an unfair society, surely this lawless environment isn't "free" in any sense of the word. Well, it's freedom for Rupert Murdoch but not for anyone else. A true free market allows anyone to enter and leave and not just the rich or heartless or criminal who decides to take what he wants cause there is no law or regulation in the society he is in to stop him.

It's why I think GOP conservatives should be banned from office. Idiots should not lead or make policies. Once the politicians have been cleaned out using lie detectors and we get our facts straight then we can restart but this time with a little sanity.

Government's role in a free-market economy also includes protecting private property, enforcing contracts, and regulating certain economic activities. Governments generally regulate “natural monopolies” such as utilities or rail service (see Monopoly). These industries require such a large investment that it would not be profitable to have more than one provider. Regulation is used in place of competition to prevent these monopolies from making excessive profits. Governments may also restrict economic freedom for the sake of protecting individual rights. Examples include laws that restrict child labor, prohibit toxic emissions, or forbid the sale of unsafe goods. {in other words, our Constitutional government is supposed to reduce negative externalities}

A free-market economy may also permit the accumulation of vast wealth and powerful vested interests that could threaten the survival of political freedom.

In an oligopoly, there are only a few firms that make up an industry. This select group of firms has control over the price and, like a monopoly, an oligopoly has high barriers to entry. (My explanation: An oligopoly intentionally limits it's competition - i.e. the free market economy doesn't work in such a condition such as the media which is just a few very big companies i.e. an oligopoly)

A monopoly is an enterprise that is the only seller of a good or service. In the absence of government intervention, a monopoly is free to set any price it chooses and will usually set the price that yields the largest possible profit. i.e. Fox News & Fox Business & Sky News (all the same pretending to be different)
As a way of thinking, capitalism involves the following:Capitalism as a way of thinking is fundamentally individualistic, that is, that the individual is the center of capitalist endeavor. This idea draws on all the Enlightenment concepts of individuality: that all individuals are different, that society is composed of individuals who pursue their own interests,that individuals should be free to pursue their own interests (this, in capitalism, is called "economic freedom"), and that, in a democratic sense, individuals pursuing their own interests will guarantee the interests of society as a whole.


How can an individual pursue his or her own interests unless there are laws and regulations to keep the market and society free enough for him or her to make their choices freely and without coercion through media lies or the monopoly's or oligopoly's despotic power?

Think about it. Pure economic freedom for "job creators" with no rules & regulations for them to follow can be compared to slave owners i.e. slave owners are "employers" who have no rules & regulations as to what they can or can not do with their employees. Here is a visual example of how labor got treated before unions gave workers a voice and Government came it to restrict the economic freedom for a few so others could also have a chance at some economic and other kinds of freedom 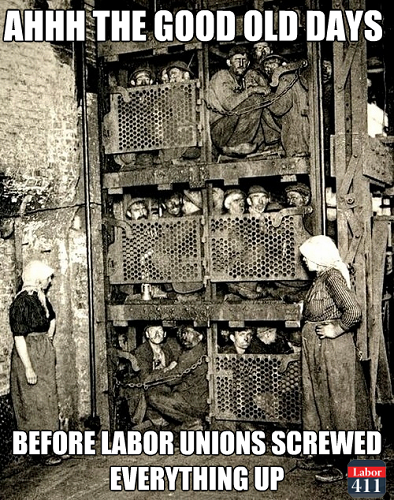 What Is Snake Oil?
It's what the GOP sells with thier rhetoric.


A Look At The Corporate Media (Liberal Libertarianism.org)