"Be it ever so crumbly, there's no place like Rome; Nero, he was the emperor and the palace was his home. But he liked to play with matches"...

"...and for a fire yearned, So he turned Rome to ashes and fiddled whiled it burned!" --Bugs Bunny 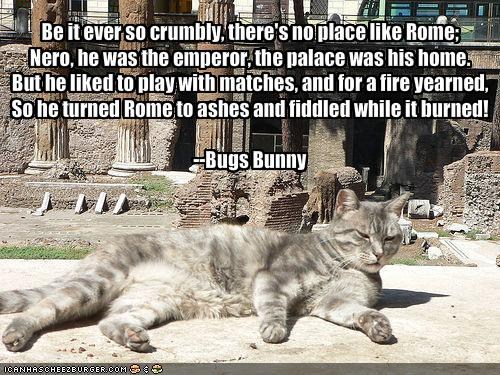 Audio Book: The Decline and Fall of the Roman Empire Vol. I by Edward Gibbon


The History of The Decline and Fall of the Roman Empire, a major literary achievement of the 18th century published in six volumes, was written by the celebrated English historian Edward Gibbon. Volume I was published in 1776, and went through six printings (a remarkable feat for its time). Volumes II and III were published in 1781; volumes IV, V, VI in 1788-89. The original volumes were published as quartos, a common publishing practice of the time.The books cover the period of the Roman Empire after Marcus Aurelius, from just before 180 to 1453 and beyond, concluding in 1590. They take as their material the behaviour and decisions that led to the decay and eventual fall of the Roman Empire in the East and West, offering an explanation for why the Roman Empire fell.Gibbon is sometimes called the first "modern historian of ancient Rome." By virtue of its mostly objective approach and highly accurate use of reference material, Gibbon's work was adopted as a model for the methodologies of 19th and 20th century historians. (Summary from Wikipedia)
Posted by Abe at 4:46 PM

Email ThisBlogThis!Share to TwitterShare to FacebookShare to Pinterest
Labels: Bugs Bunny, Nero, Roman History, Rome, The Decline and Fall of the Roman Empire