This post is intended to illustrate that the GOP is breaking down society with their political stances. 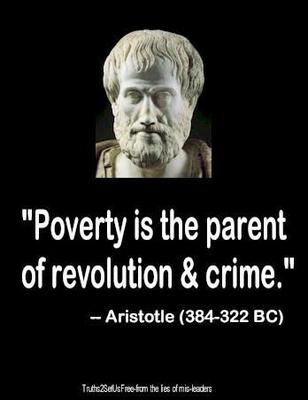 INTRO: The relationship between Republican governors and their states goes from cool new boyfriend to psychotic stepdad...


Notice the elimination of social structure and jobs; By decreasing the social services available to lower incomes you have a break down of society at the social level of the lower to middle income class. This causes a great deal of stress on the economy and family structure of a country.

Here are the sort's of behaviors influence by rumor and paranoia...

‎1. Too much of a spread in income inequality - (that is why the really rich with foresight/understanding have bunkers) .

Riot girls 'brag' about violence: The BBC has spoken to two girls that took part in Monday nights riots in Croydon, who boasted that they were showing police and "the rich" that "we can do what we want".

What turns people into looters?: Many in the UK are reeling after days of images of brazen thefts and wanton damage during the riots, but just where is the tipping point when people think they can start looting?


3. Breakdown of economy through inappropriate economic strategy because of a new fundamentalist right wing movement
[that is cover for unconstitutional capitalism Has Fox News Become A Cult Of UN-Constitutional Capitalists? or more accurately the robber baron days of fuedalism that the US Constitution was trying to solve ] - no jobs or 'stake' in social order - bad people taking advantage of a bad situation - people with nothing else to do (but are not hurting others) and are there for fun etc. (general composition of riots). [Views from around the world on BBC]


4. Simple opportunity for lawlessness caused by the breakdown of infrastructure
[The last blackout (which I was in the city for in NY) managed to avoid rioting by calling out all the cops... Wisconsin model... which is the same as the GOP's model is to cut cops, firemen and other civil services. If thier is a riot many people will die unnecessarily].


5. Normal behavior motivated by greed or heartlessness or simply living by the law of the streets - an example of a complete breakdown of law  [an example of what happens when people in suits are in a lawless environments can be seen by our ongoing financial and economic crises]

Injured boy mugged during riots: A group of youths help an injured boy to his feet and then steal the contents of his bag during disturbances in Hackney on Monday.

Some general trends you can expect as the US social order continues it's collapse...

The many perspectives on the Britain riots  -

The anger at the violent reaction created its own mass movement

The problem of the rumor mill that leads to mass hysteria (at local, national or global levels) and is something that the US media does on a regular basis with its fear marketing (though that may have gone down?), Fox news has taken this fear mongering to criminal levels(IMO)...


Quick Proof: An increase in income inequality was a factor in the UK riots (This is true historically as well, ex. French Revolution occurred during bad economic times) - "The majority of areas where suspect live are deprived - and 66% of them got poorer between 2007 and 2010, when the last survey was published • 41% of suspects live in the 10% most deprived places in England"

Once a society is sufficiently broken down, then all you need is a trigger, i.e. a match to start the fire...

1. The west Indian writer above was referring to the 1981 Brixton riots  ; This may show that this breakdown in society has grown overtime (a few more data points needed)
2. Another look at the Brixton riots through the specific trigger for the riots - "So tensions were running high – but like the riots that began in Tottenham last Saturday, the Brixton riots were sparked by a specific incident.

“A guy got stabbed and the police officers turned up,” Thomas said. “They were more concerned with finding out who stabbed him then actually reacting to the fact that he had been stabbed, critically. And he needed to go to the hospital.”

3. "There were plenty of ingredients before the weekend to fuel a genuine challenge to the police and a justified demand for answers. Mark Duggan is the latest in a very long line of deaths in police custody or police supervision. Recently, the reggae artist, Smiley Culture, was alleged to have taken his life with a kitchen knife in his own home while under police arrest."


The Paul Ryan plan which has been used in Wisconsin to make it's citizenry less powerful and more like third world country workers... is the only plan the GOP has on the table, i.e. because of bad journalism we now have a debate with a person who is not telling the whole truth while watering down effective policies to be less effective... and on the other side you have warmongers who are literally lying to everyone in ways that are provable

What Paul Ryan is doing is taking a sledgehammer to everything not involved with bombing others...

Earlier this morning I said that since Paul Ryan's latest budget proposal caps revenues and cuts Medicare and Social Security only modestly, this means that "everything non-elderly gets whacked hard."
But what does that mean? Well, it turns out that the Congressional Budget Office has put a concrete number to "whacked hard" here. Medicaid and CHIP (children's healthcare) would decline from 2% of GDP today to 1% of GDP in 2050, and everything else — that is, everything other than Social Security and Medicare — would decline from 12.5% of GDP today to about 4% of GDP in 2050.
This is, to put it mildly, nuts. Defense spending alone amounts to 4% of GDP, and it's vanishingly unlikely that this will ever fall much below 2-3% of GDP. This means that all domestic spending will decline from about 8% of GDP to 1-2% of GDP by 2050. That's prisons, border control, education, the FBI, courts, embassies, the IRS, FEMA, housing, student loans, roads, unemployment insurance, etc. etc. It's everything. Whacked by about 80% or so. 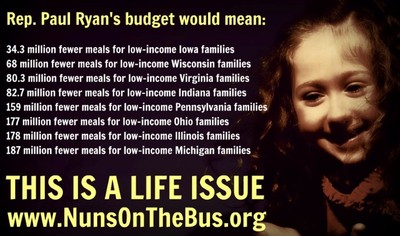 To pass such a radical and unconstitutional (because of the clear attack on "We the people") plan through the Courts...

...the GOP Republicans have been demonizing anyone who opposes their  warfare plans (to the point of demonizing whole segments of the population).

Scorn in the U.S.A. It must be tough for Republicans to love America so much but hate almost three-quarters of the people living in it...

Here is where the "war party" managed to actually reverse the very moral compass that people normally have!...

‎"Let the record show that on January 16, 2012, the good people of South Carolina booed the Golden Rule." ― Jon Stewart. Indecision 2012

Notice that the rhetoric the GOP is using (at 3 mins and 15 secs -approx) is towards creating civil war while basic moral values such as "The Golden Rule" is being booed. This sort of crazy behavior is basically "Tea Party". The Tea Party is funded by the Koch Brothers and Newt Gingrich helped create it (It used to be Ron Pau's but it isn't anymore).

Another example of creating fear through paranoia: Whistling to set off a nuclear bomb (from a movie? I remember this scene) ...and getting solitary confinement (unusually harsh and nonsensical punicshment cause if that's possible we have a bigger problem than this one guy).

Watch these video that highlight certain absurdities of the GOP/Paul-Ryan-Plan...


Note: Fox News/New Repubs talk of percentages for the minority group they protect (very rich guys/Koch brothers) but numerical figures with examples of piles of money when attacking majority interests (too make "we the people" seem like the problem rather than a few fat cats).

A. "We gotta start somewhere... that's a million dollars (that we could save) - in contrast to the 700 billion we could save to reduce the deficit from the rich and unfairly untaxed - i.e. They start with the assumption that this is the only way, so dumb uneducated people who are in love with the anchors, buy it.

B . From fox news: Dont tax the rich but 'broaden the tax base'. Or in other words, don't inconvenience me with a 2% tax increase, make the poor suffer by increasing their tax burden.

C. Taxing the majority (poor) instead of taxing the minority (super rich by comparison) this is the very definition of despotism.

D. Heritage institute (Koch Brother funded) are trying to create the image of poor being wealthy cause they have normal second world amenities, it's not even first world anymore! (i.e. this will lower standard of living in the USA even further).

E. Demonizing (ex. irresponsible animals) the part of society that is suffering from the excess and scamming of certain individuals on wall street etc.


‎"Their main problem with Ron Paul... is because he won't pre-agree to start a war with Iran" - Jon Stewart


More proof of heartlessness in the GOP

(i.e. they have distinctively ANTI -Christian policies - as it does the opposite of the Golden Rule which Jesus supported with "Love thy neighbor as yourself"... unless you are a sado-masochist!)

THE GOP Won't Support Helping Others BUT Will Support War...

War leads to psychological damage as killing people heartlessly whether done by an individual or a Government sanctioned by the people is NOT normal behavior for a civilized society as it encourages violence.

War also causes terrorism in it's own society and others, either through an internal breakdown in society as society has to become heartless to some degree to tolerate massacres and genocide of innocent civilians in other lands OR by killing innocents in other countries i.e. if you kill a bunch of innocent people in the States you ARE committing an act of terror AND IS JUST THE SAME as when your army does it abroad)

"But no, I’m not emotionally fine. I don’t know the status of all of my friends or of my extended radio family, many of whom may have been there to see “Dark Knight” and instead experienced the darkest night of all. And just as important, whether I personally knew the victims or not, 50 of my fellow Coloradans shot down while watching a superhero flick is both an unspeakably awful tragedy and yet another jarring reminder that terrorism is everywhere."