{This may seem disjointed but if you read everything and watch the videos it will begin to make sense.}

Introduction to the CIA's Drug Smuggling...


On Yahoo: The story of two American pilots who fly for the CIA's covert airline during the last days of the Vietnam war.

"Wag The Dog" Trailer on YoutTube

"We'll know our disinformation program is complete when everything the US public believes is false." William J. Casey, 1981 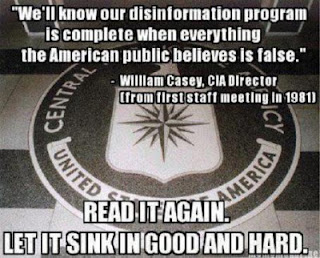 Every population is composed of teachers pets (the ones who will do everything the Government says and bring em apples hoping for a pat on the head), bored smart alecs who are smarter than the rest of the class and want to move forward from the teachers boring and often inept plan and the minor trouble makers who think some laws are overdone and some aren't and the miscreants, those that will disobey everything even if for thier own good. Which is OK as these are the same people that put thier fingers in electrical sockets when they were kids to see what happened or got bullied and then bullied others to see what the point was and enjoyed it, so never stopped.


Same applies to drugs. When you ban something everything will react in different ways depending on who they are trying to please and what the person they are trying to please is saying. Some people will be curious like kids, or how scientists are supposed to be (not what they seem to be now, at least on a mass scale), so they will try out the banned thing - or read it if a book - to see what's up. And so on.


Bill Moyers "The Secret Government: A Consitution in Crisis" video segment... It aired on PBS in 1987 and is as good as anything on the tape (must see). Moyers is a very respected TV journalist who also worked for Lyndon B. Johnson and has a very professional approach. He interviews many different people involved with the CIA and other government agencies.


Here is an introduction to this cultural (some may say psychological) aspect of history that swings back and forth between extreme conservatism and those wanting to live life without some priest controlling them. The US is currently in a very strange position as far as all of this is concerned and swings wildly back between the two extremes and conservatives and constitutionalists battle it out. There are a bunch of other categories but the two basic ones are the GOP robber barons and the people trying to protect the Constitution .... though the media is doing a great job on muddling up the meaning of the Constitution and and what the issues are all about.

Watch Roots of PROHIBITION A Nation of Drunkards on PBS. See more from Prohibition.


PROHIBITION is a three-part, five-and-a-half-hour documentary film series directed by Ken Burns and Lynn Novick that tells the story of the rise, rule, and fall of the Eighteenth Amendment to the U.S. Constitution and the entire era it encompassed.
The culmination of nearly a century of activism, Prohibition was intended to improve, even to ennoble, the lives of all Americans, to protect individuals, families, and society at large from the devastating effects of alcohol abuse.


Prohibition turned law-abiding citizens into criminals, made a mockery of the justice system, caused illicit drinking to seem glamorous and fun…

But the enshrining of a faith-driven moral code in the Constitution paradoxically caused millions of Americans to rethink their definition of morality. Thugs became celebrities, responsible authority was rendered impotent. Social mores in place for a century were obliterated. Especially among the young, and most especially among young women, liquor consumption rocketed, propelling the rest of the culture with it: skirts shortened. Music heated up. America's Sweetheart morphed into The Vamp.
Prohibition turned law-abiding citizens into criminals, made a mockery of the justice system, caused illicit drinking to seem glamorous and fun, encouraged neighborhood gangs to become national crime syndicates, permitted government officials to bend and sometimes even break the law, and fostered cynicism and hypocrisy that corroded the social contract all across the country. With Prohibition in place, but ineffectively enforced, one observer noted, America had hardly freed itself from the scourge of alcohol abuse – instead, the "drys" had their law, while the "wets" had their liquor.
The story of Prohibition's rise and fall is a compelling saga that goes far beyond the oft-told tales of gangsters, rum runners, flappers, and speakeasies, to reveal a complicated and divided nation in the throes of momentous transformation. The film raises vital questions that are as relevant today as they were 100 years ago – about means and ends, individual rights and responsibilities, the proper role of government and finally, who is — and who is not — a real American.

Sundog Pictures released its feature documentary "Breaking the Taboo" to YouTubeon Friday, giving the world a free look at its nearly hour-long film on the catastrophic failures of the international war on drugs.
(Watch the entire film above)
Narrated by Morgan Freeman, "Breaking the Taboo" features appearances from former President Bill Clinton and Jimmy Carter, both of whom admit that the policies they pursued to support the drug war were not successful.

Socially the corporations in the US have turned minor marijuana offenses into a money making scheme (not all of them obviously, but GOP Leaders are making money off of this). Here is an interview that goes deeper...


From Bill Moyers.com In its premiere episode, Moyers & Company dives into one of the most important and controversial issues of our time: How Washington and Big Business colluded to make the super-rich richer and turn their backs on the rest of us.

Bill’s guests – Jacob Hacker and Paul Pierson, authors of Winner-Take-All Politics: How Washington Made the Rich Richer — And Turned Its Back on the Middle Class, argue that America’s vast inequality is no accident, but in fact has been politically engineered.

How, in a nation as wealthy as America, can the economy simply stop working for people at large, while super-serving those at the very top? Through exhaustive research and analysis, the political scientists Hacker and Pierson — whom Bill regards as the “Sherlock Holmes and Dr. Watson” of economics — detail important truths behind a 30-year economic assault against the middle class.


Prisons for profit(PBS): "Corporations are running many Americans prisons, but will they put profits before prisoners?" 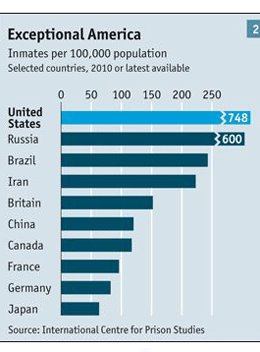 Investigating prisoner abuse will be a political food fight, and that is messier than torture. (03:31) 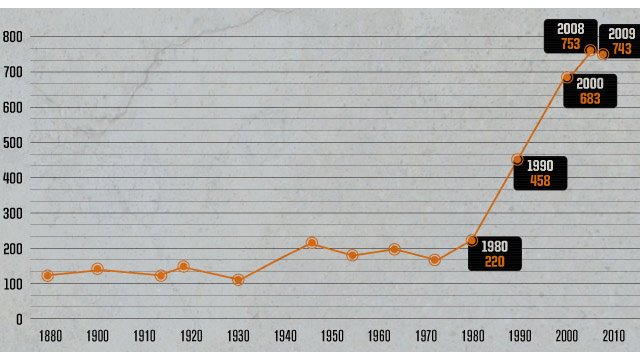 "Another chart on America's prison population from GOOD Magazine showing U.S. incarceration rates per 100,000 over time."

So what do we want to accomplish as a society, a bunch of poor people getting drunk and depressed? That's dumb. To begin with there aren't any medical services, no mental health services, no stress management services... just alcoholism. The ones that smoke the extra expensive (cause it's illegal) stuff get thrown in jail. Maybe crazy would be a better word than dumb.

Stevenson adds that to reach King’s dream, America must address the causes of poverty, “I think in America, the opposite of poverty is justice. I think there are structures and systems that have created poverty, and have made that poverty so permanent, that until we think in a more just way about how to deal with poverty in this country, we’re never gonna make the progress that Dr. King envisioned.”

Both believe that America’s policies of mass incarceration continue the cycle of poverty. America is the largest jailer on the planet, with 2.3 million people behind bars. But the policy of mass imprisonment, unique among industrialized nations, disproportionately affects minorities, especially African American men. One in 100 adults in America is behind bars, but one in nine African American men aged 20 to 34 is behind bars. Much of this arises from the “war on drugs.” According to Human Rights Watch, African American adults have been arrested at a rate 2.8 to 5.5 times higher than white adults in every year from 1980 to 2007. Yet, according to government statistics, African Americans and whites have similar rates of illicit drug use and dealing.

Context to understand some of the strange rules Corporations are allowed (more than an average person/family for sure)...


In the old form of communism/socialism an elite group of politicians owned people called serf or slaves or the masses.  In the new form of communism/socialism a small group of elites control different segments of the population through fictional entities called "Corporations". Thus modern "Socialism" is actually more appropriately and accurately called "Corporatism."

Cheney's Secret Assassination Squad: It's hard to believe Dick Cheney had the time to command a secret lawless assassination squad with all the secret lawless torture. (02:10) http://www.colbertnation.com/the-colbert-report-videos/223481/april-02-2009/cheney-s-secret-assassination-squad Full = http://www.case4ronpaul.blogspot.com/2011/10/on-anwar-al-awlaki.html

Thomas Kean talks about the process of getting over two million documents in spite of bipartisan resistance to the 9/11 commission. http://www.thedailyshow.com/watch/wed-august-16-2006/thomas-kean

Philip Shenon: Jon tries to finger one person in particular for the 9/11 bungling with the help of the New York Times journalist and author. http://www.thedailyshow.com/watch/mon-february-11-2008/philip-shenon

Here's a tribute to a few Republican senators who find comfort and advantage in invoking the heroes of 9/11 but refuse to give them health care http://www.thedailyshow.com/watch/mon-december-13-2010/lame-as-f--k-congress

Bush Testifies: It would be funny if President George W. Bush apologized to the families of 9/11 victims for any mistakes his administration may have made before the attacks. http://www.thedailyshow.com/watch/thu-april-29-2004/bush-testifies

Moment of Zen 1: "Which attack would you rather have not permit... er, stopped?" George W. Bush http://www.thedailyshow.com/watch/mon-february-11-2008/moment-of-zen---poison-pick

Moment of Zen 2: "President George W. Bush and Dick Cheney had a good conversation with the 9/11 commission." http://www.thedailyshow.com/watch/thu-april-29-2004/good-talk

The problem with picking on people who prefer an upper (marijuana) as opposed to a downer (think of how drunk soccer fans are when they riot), is that it creates an environment where only drugs that depress you are allowed. Coffee is a powerful drug. I can't operate without it. Many people can't does that mean it should be regulated? Marijuana doesn't kill brain cells but drinking lots of alcohol can damage your brain. Are we saying stuff that destroys your brain is OK while stuff that is harmless but scares old people because they are so used to be depressed or acting crazy that any other sort of behaviour not involved with going mad (such as getting high and chatting, playing video games or watching movies) becomes wrong. We should be encouraging people to expand their awareness and learn how to concentrate better. Instead we are confusing them more and then wondering why things are getting worse.

What marijuana is said to do involves perception and much of these studies are done by people who are either bought by a corporation OR are giving kids drugs because they are hyper. Who knows a kid that likes sitting still in a class? Have you ever been to a public school? Why so much attention on something that's not serious such as cocaine of heroin (the stuff the CIA is - allegedly - trading in. Is it because Marijuana can't be regulated by the CIA?)


What about Marijuana WITHOUT THC? i.e. what if you grow it for industrial use since such plants exist...


Hemp Can Be Used To Make Plastic Stronger Than Steel, Paper, Textiles, Oil, Non-Toxic Medicine, Cement... & Tornado Shelters! (It's the miracle crop for our age)

From it's IMDB page: An informational film produced to encourage farmers to grow hemp for the war effort during WW2. The film details the many industrial uses of hemp, including cloth and cordage, as well as a detailed history of the plant's use.