Here are the main people who seem to control the Tea Party and a majority of Libertarians:

"The Koch Brothers are worth $50 billion. They’ve bankrolled the Tea Party, the campaign against climate change science, and entire university departments to advance their right-wing agenda. The newest item on their shopping list: their own Center for American Progress."

News footage from 2007 mixed with other video that documents the origin of the modern day Tea Party movement and those responsible for it.

It was started in 2007 from the grassroots by Ron Paul supporters for his 2008 Presidential Campaign. After gaining momentum it was co-opted by certain Republicans with help from Fox News and other corporate entities. It's no longer the spontaneous decentralized movement that it once was though Ron Paul's message of limited government and a return to the Constitution is still at it's core.


Now the Tea Party and majority of Libertarians seem to have been modified by the Koch Brothers, So I call them "Koch Brother Libertarians". But it's mostly because of Judge Napolitano & John Stossel. What they do is support some things Ron Paul supported and oppose others (for example Ron Paul is geared towards peace while John Stossel is geared towards violence and you can tell this in the interviews and Ron Paul trying to be conciliatory but incompetently. Anyways, by saying stuff your followers like and then saying stuff that is wrong but the followers don;t know any better - and they now like the person - leads to disinformation. I could explain it more more detail using technical hypnosis words, of course. But instead, here is a visual example: From John Stossel of Fox News (a FAKE Libertarian) = "I think it will take visible riots to help people focus on this thing" (an indirect call for violence)

After the Tea Party movement was created, the creators (Fox News) distanced itself acting as if the Tea Party sprang up 'on its own'...


About a minute in Newt Gingrich says that the tea party 'kinda sprang up on its own' (i.e. obvious lie). Then Stephen Colbert proves that the Tea Party was founded by anchors of Fox News and activism ideas even came from the GOP party chairmen. About 3 minutes into the video Stephen says a bunch of nonsense, mixing various eras from history together with fiction, this is making fun of Glenn Becks theories which tend to be historically and factually inaccurate.


The Koch Brothers are using their criminal connections for training the Tea Party to become as racist as they are while denying their racism (since 2008!). i.e. here is the Koch Brothers racism: The Kochs, Segregation, and Joseph Stalin - YouTube

And here is an explanation from Morgan Freeman on a show hosted by someone I don't like for shenanigans by him during the elections (or with another debate which shall not be mentioned here at this time), but otherwise the info is good:


"The tea partiers who are controlling the Republican party...their stated policy, publicly stated, is to do whatever it takes to see to it that Obama only serves one term," he tells Piers Morgan. "What underlines that? Screw the country, we're going to do whatever we can to get this black man out of here."He continues: "It is a racist thing."

Education increases the intellectual wealth/capital of a community or nation. Making education worse is an attack on the long-term economic wealth of a nation.


News Reports Showing How Koch Brother Funded Tea Partiers/GOP Are Lying About The Prospects Of The American Dream Under Their Plan:


Social Mobility Is Improved With De-Segregation (i.e. it helps bring more opportunities to citizens)
Segragation increases income inequality (which decreases level of democracy) - "The research, carried out by John Ermisch and Emilia Del Bono from the Institute for Social and Economic Research at Essex University, describes the different intakes as the "sorting of children into higher-performing and lower-performing schools". "We need to consider more radical options to create more balanced intakes in secondary schools and pilot innovative approaches to improve attainment for the poorest children," says the Sutton Trust chairman. "A failure to respond to this challenge is to condemn our disadvantaged youngsters - and our economy - to the bottom of the class in education's world order," said Sir Peter. Last year, a major report by former cabinet minister Alan Milburn warned that social mobility had slowed - and that the most sought-after professions were increasingly dominated by young people from affluent families."

Social mobility is important to keep people moving up (for example, The 'american dream' consists of having the opportunity to move up - segregating society makes that more difficult)

"Top professions such as medicine and law are increasingly being closed off to all but the most affluent families, a report into social mobility has said."

There there is climate change denial - as it cuts into profits - using something called a "CATO":

The National Toxicology Program, part of the National Institutes of Health, publishes the biannual Report on Carcinogens, which is one of the primary sources of up-to-date public information about chemicals that are known or suspected causes of cancer. The report has been published since 1980, in response to a directive from Congress. But if Rep. Denny Rehberg (R-Mont.) gets his way, soon we might lose this detailed information about the chemicals putting us at risk.

Heritage is a Koch created and funded institute.

1. "Before joining Heritage in June 2007, Loris was an associate at the Charles G. Koch Charitable Foundation, immersing himself for a year in a market-based management program."  ,

Then there are the lies about the Keystone pipeline. It doesn't create long term jobs. It will create fuel over 2 decades. It will cause earthquakes as well. The Koch Brothers have enough money to survive earthquakes and tsunamis. Most of the rest of the population doesn't. Amnesties/Tax-Breaks/help for the rich and death for common Citizens is another aspect of "Corporatism".


Koch company declared 'substantial interest' in Keystone XL pipeline: Document filed with Canada's Energy Board appears to cast doubt on claims by Koch Industries that it has no interest in the controversial pipeline.


The Koch brothers want to take this man’s livelihood. A Texas resident, he’s on the front lines fighting the Kochs and Big Oil, and asking Hillary Clinton to say NO to the Kochs.

Will you join him and sign out petition at http://KochBrothersExposed.com/?

1. Citizens don't want their property destroyed:
"See the land owners and citizens of Nebraska as they voice thier concerns about the Trans Canada XL Pipeline which could affect the protected Sandhills and drinking water supply"...

2. The Keystone Pipeline creates ONLY a few temporary jobs (i.e. it's a pipeline... how many people do you need to manage the pipes in your house? None):
"The State Department said in a report to Congress yesterday that the pipeline would create 5,000 to 6,000 construction jobs during the two years needed to build the project, based on labor expenses TransCanada included in its application."


I once explained what a depression would be like here. The "stimulus" was badly mismanaged as shown here because of this and this.

Just so there is no misunderstanding of my position... "The more money that is invested into a method that will choke us also sets up the next 'too big too fail' companies, since if we get too a point where we have to cut down on carbon release to survive then we have to bail out the companies or face another contraction [although since effective government spending (stimulus) may be too difficult for the US, we may be better off letting them fail when we get to that point.]" i.e. since redirecting investment is beyond the corporate government and all they can do is wage war on US citizens, it's best that every thing oil related should not only be allowed to fall, citizens should (eventually) be suing these companies till they go bankrupt.

February 29, 2012
How, in a nation as wealthy as America, can the economy simply stop working for people at large, while super-serving those at the very top? This weekend, in an encore broadcast of the premiere episode of Moyers & Company, Bill Moyers looks at America’s economic disparity and investigates how it happened and who’s to blame. His detectives: political scientists Jacob Hacker and Paul Pierson, authors of Winner-Take-All Politics: How Washington Made the Rich Richer — And Turned Its Back on the Middle Class. Through exhaustive research and analysis, Hacker and Pierson — whom Moyers regards as the “Sherlock Holmes and Dr. Watson” of economics — detail important truths behind a 30-year economic assault against the middle class.
Moyers calls the book “the best account I’ve seen of how politicians rewrote the rules to create a winner-take-all economy that favors the 1% over everyone else, putting our once and future middle class in peril.”
The show includes testimony of middle class Americans at a Senate hearing about the impact of hard times on families, as well as an essay on how Occupy Wall Street reflects a widespread belief that politics no longer works for ordinary people, including footage we took at the OWS rally from October-December 2011.
EXXON Bailout/Tax-Break... even-though it made a profit! (If oil companies were paying taxes and it was being invested in alternative energy sources then the energy problem would be solved by now) 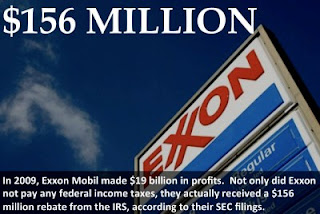 Sanders Statement on Keystone XL Pipeline:
"The president made the correct decision today in rejecting the Keystone XL pipeline, and I will fight to ensure Congress does not overturn the decision.

More on the Koch Brothers here.
Posted by Abe at 3:46 AM