UFO/UAP News: NY Times Reports That The Pentagon Report On UFOs/UAPs Is Expected To Be Inconclusive

According to the NY Times the upcoming report from the Pentagon is inconclusive, i.e. the UFOs/UAPs could be Russian, Chinese or Alien. There is no evidence one way or another.

TODAY: Pentagon UFO Report Raises National Security Concerns
A highly anticipated intelligence report on UFO sightings and encounters is scheduled to be released by June 25. But according to senior administration officials briefed on the report’s findings, the inexplicable may remain just that – and there are concerns about Russian and China developing new weapons technology. NBC’s Stephanie Gosk reports for TODAY.

Extract from the article news is reporting on:

NY Times: U.S. Finds No Evidence of Alien Technology in Flying Objects, but Can’t Rule It Out, Either

The report determines that a vast majority of more than 120 incidents over the past two decades did not originate from any American military or other advanced U.S. government technology, the officials said. That determination would appear to eliminate the possibility that Navy pilots who reported seeing unexplained aircraft might have encountered programs the government meant to keep secret.

But that is about the only conclusive finding in the classified intelligence report, the officials said. And while a forthcoming unclassified version, expected to be released to Congress by June 25, will present few other firm conclusions, senior officials briefed on the intelligence conceded that the very ambiguity of the findings meant the government could not definitively rule out theories that the phenomena observed by military pilots might be alien spacecraft.

One senior official briefed on the intelligence said without hesitation that U.S. officials knew it was not American technology. He said there was worry among intelligence and military officials that China or Russia could be experimenting with hypersonic technology.

He and other officials spoke on the condition of anonymity because they were not authorized to speak publicly about the classified findings in the report.

Russia has been investing heavily in hypersonics, believing the technology offers it the ability to evade American missile-defense technology. China has also developed hypersonic weaponry, and included it in military parades. If the phenomena were Chinese or Russian aircraft, officials said, that would suggest the two powers’ hypersonic research had far outpaced American military development.

Navy pilots were often unsettled by the sightings. In one encounter, strange objects — one of them like a spinning top moving against the wind — appeared almost daily from the summer of 2014 to March 2015, high in the skies over the East Coast. Navy pilots reported to their superiors that the objects had no visible engine or infrared exhaust plumes, but that they could reach 30,000 feet and hypersonic speeds.

Lt. Ryan Graves, an F/A-18 Super Hornet pilot who was with the Navy for 10 years, told The New York Times in an interview, “These things would be out there all day.” With the speeds he and other pilots observed, he said, “12 hours in the air is 11 hours longer than we’d expect.”

Here are some of the headlines;

A long-awaited government report on UFOs found no evidence that the objects came from outer space. But the objects remain unidentified. David Martin has the details.

MSNBC: UFO Report: No Evidence Of Alien Spacecraft, But Can't Rule It Out

The truth is out there — somewhere. NBC's Courtney Kube reports on the national security implications of the government's UFO report, where they said there was no evidence of extraterrestrial activity, but did not rule it out.

MSNBC: UFO Intel. Report Expected To Be Inconclusive On Flying Objects
A U.S. intelligence report on the uptick of UFO sightings is expected to neither confirm evidence of extraterrestrials or rule out the possibility. The findings are expected to be inconclusive when the final report is released.
Fox News: What are they? Government UFO report inconclusive
Fox News national security correspondent Jennifer Griffin discusses what the government knows about UFO’s on ‘Special Report’

New details have been leaked from the Pentagon's UFO investigation, including whether the sightings could be a sign of alien life. Plus, Joe Exotic's life is being turned into a television series. Richard Southern and Melissa Nakhavoly discuss. 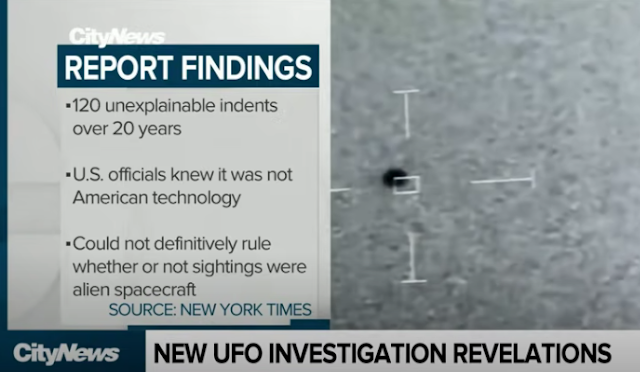